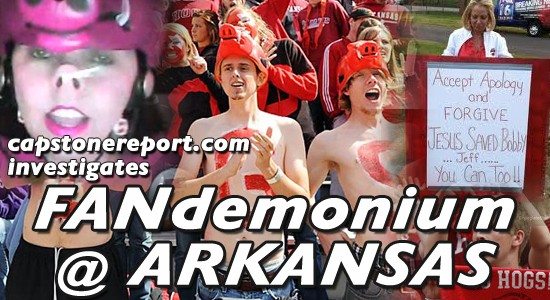 We’re wrapping up a three-week journey examining the fanbases of each of the fourteen SEC schools. Friday was Florida. Today we shed our dignity, put on our hog hats and cross the Mississippi into Arkansas.

There are some funny mascots out there. There’s the Spiders. The Boilermakers. The Cornhuskers…literally a mascot of a farmer who picks corn. The Orangemen…who knows what that is. Not to mention the Demon Deacons, Vandals and Cardinal––singular, no “S”…as in one solitary tree.

But in the SEC, the mascot that takes the cake…finishing just ahead of Ole Miss’ Black Bear Rebel Thingies…is the Razorbacks.

The University of Arkansas’ mascot is a hog. A pig, if you will. While Alabama and Auburn both have mascot identity issues, Arkansas knows who they are. They are pigs.

But, all things said, Arkansas fans are passionate pigs. They love their hog football, and have experienced enough success in their history to substantiate that passion. They own a national title (1964) and 13 conference championships, all in the now defunct Southwestern Conference. While in the SEC they’ve won or shared a tie in the West four times, making it to Atlanta thrice. All were losses, but as Ole Miss fans will tell you, just getting there would be nice.

They have had legendary coaches like Frank Broyles and Lou Holtz (and if Lou has coached for you he’ll never pick against you on ESPN), and produced household names like Felix Jones, Darren McFadden, Billy Ray Smith, Jr., Lloyd Phillips, Jimmy Johnson and Jerry Jones, to name a few.

But still, their mascot is a pig. Ham. Wild ham, but still, ham.

Perhaps the most surreal sound you’ll ever here is 66,000 or so Arkansas fans in Fayetteville yelling together:

They call this “Calling the Hogs,” the equivalent (in their minds) of Alabama’s “Roolllll Tide” cheer. Grown men and women, voluntarily calling fictitious pigs.

My assessment is, the reason this works is that Arkansas is a one-horse state. The state is unified behind the Razorbacks. There are no competing interests (Arkansas State and Arkansas-Little Rock don’t count).

Like the entire state endorsing the use of a pig as your mascot, beginning in 1910. The University of Arkansas was known as the Cardinals before, but according to tradition, after a 7-0 season, coach Hugo Bezdek declared his team’s frenzied play was like “a wild band of razorback hogs.” The name stuck, and 103 years later, Arkansas’ mascot is till a wild Honeybaked ham.

Like any fanbase, Arkansas has a thirst for success. Following what by most SEC schools’ standards was a successful career at Arkansas, the Hogs replaced Houston Nutt for a coach with questionable character in Bobby Petrino. Petrino had a track record of shady deals and self-centered egotism. But as long as you win, who cares. Like most fanbases, that was the Razorbacks’ motto.

The track record caught up with them in the spring of 2012 when Petrino was found to have hired his mistress, former Arkansas volleyball player Jessica Dorrell.

Petrino was let go, and the hopeful 2012 season was dashed at the hands of a bumbling idiot (John L. Smith). What was widely thought to be an upcoming championship run was thwarted from within, becoming instead a 4-8 season. In the midst of that horror, many Arkansas fans rallied together to try and encourage the troops. Like this lady:

It’s just hard to put into words what you feel after watching something like that.

In the midst of the treacherous season, many were calling for Petrino to be rehired. When a fanbase grows hungry for wins, morals are easily overlooked. That’s not to say Arkansas has cornered the market on putting wins ahead of doing what’s right. When fandemonium sets in, it’s easy to overlook things like dads shopping QB sons, affairs and other nuisances to winning.

But in their case, to their credit, the administration’s original convictions were upheld, and for all intents and purposes, with the hiring of Brett Bielema, the school seems to have given their fans a good shot at future success. Bielema was by far the best hire for vacant league positions in the offseason.

In my experience, Arkansas fans are some of the better fans in the conference. It could be because they wear blinders in that state, unaware of what’s happening beyond the border. But for the passion, the devotion, longsuffering and atmosphere, it’s hard to beat the Razorbacks.

Off the field, I mean.

Next:
A summary of SEC fans

One thought on “FAN REVIEW: Arkansas––A passionate group of pigs”