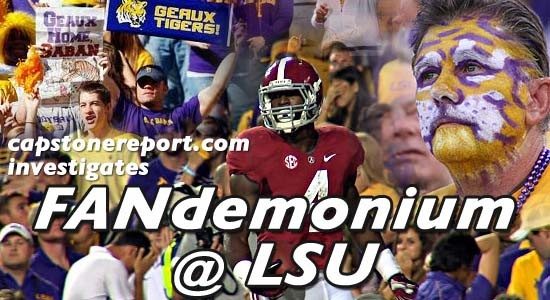 We’re on a three week journey examining the fanbases of each of the fourteen SEC schools. Yesterday was Mississippi State. Today we lather up in anti-bacterial soap and head to the Red Stick.

LSU fans are notorious for their boorish behavior at football games. Fans of rival schools have been hospitalized after using a portable toilet and having it turned over with him inside, another was hit with a mudball and others have even had personal property destroyed. A famous football coach known for his thumb was hit with a lit cigar tossed by an LSU fan.

The situation was so bad that LSU’s own student newspaper investigated what it was like to be an Alabama fan at an LSU game in Baton Rouge. Here is what the women wrote:

“Vulgar language has never really bothered me, and the incessant ‘Tiger-baiting’ and
‘Around the bowl and down the hole, Roll Tide, Roll’ mocking were the least of my worries. Almost every tailgate spot we visited greeted us with the same expressions. The women called us ‘bitches,’ and the men called us ‘cunts’ followed by the traditional ‘Rip. Rip. Rip. Rap. Rap. Rap. You ‘Bama girls got the clap, clap, clap!’ cheer. And if that wasn’t enough, the amount of times we were spit on also struck a nerve. Spitting on someone is one of the most degrading things a human being can do to another.
Verbal abuse is powerful, but when things get physical, that’s a little more effective. The most significant physical encounters were from male Tiger fans. And they all involved some kind of inappropriate gestures. We were groped and squeezed by just about every guy we interviewed.”

Lest anyone think this is all in the past. In 2012, LSU fans participated in vulgar cheers directed at Alabama Crimson Tide Coach Nick Saban. This upset one LSU fan who called such fan behavior a dishonor to LSU.

But all this prompts the question, Why so angry?

For all LSU’s success, the school in Louisiana was upstaged by its greatest former coach when Nick Saban came to coach football once again in the SEC, more to the point, in the SEC West, even more to the point at long-time rival Alabama.

It would be easy to say Alabama since it was Alabama and Nick Saban who interrupted what should have been an LSU dynasty and supplanted it with a Crimson Tide dynasty. However, LSU fans have treated others like crap for years. And not only Alabama fans but complaints have come from Georgia fans, Auburn fans, Alabama fans, Arkansas fans and Florida fans—just to mention a few.

The vile behavior is part of the intoxicated culture of LSU football.

Yet, things have gotten worse with the return of Nick Saban. He is the king of college football.

The jealousy this created in LSU fans was unleashed back in 2008 and continues to this day. Every time LSU fans become convinced Les Miles can keep things going and compete with Nick Saban, reality slaps LSU back from delusion.

But what makes so many LSU fans into such vile creatures?

The very tradition that LSU fans guard with their life’s blood—Death Valley at night.

The Daily Comet explained why this is so important to LSU, “LSU fans cherish night games because it gives them all day to tailgate before the game, which gets them extra rowdy to cheer on their Tigers under the lights.”

Time to get extra rowdy.

It really is not that difficult an equation. Death Valley + Night = All day drinking binge= obnoxious fans.

One of the worst Alabama fans has to be the infamous Teabagger. What fueled that obnoxious behavior in New Orleans? Alcohol combined with football. Both the teabagger and his LSU victim left behind moderation and we were forced to witness the disgusting results on YouTube.

This stands in contrast to one of the best post-loss experiences I’ve had in Tuscaloosa. Back in the malaise days of Mike Shula, a Nick Saban-led LSU team came to Tuscaloosa. It was on ESPN at night. Alabama’s offense was pathetic and the LSU defense was superb. I think Alabama crossed midfield what seemed like twice. After the game, an older LSU fan walked out of the stadium near me. We had a polite conversation about the game, the state of the two programs and college football.

Most fans in the SEC are like this polite LSU fan.

However, there are far too many jerks who are fueled by alcohol and the alcohol culture surrounding partying at Death Valley. These characters act out in ways that embarrass their schools.

In Miami for this year’s BCS National Championship Game, I sat among predominantly Notre Dame fans. About an hour before the game and early in the first quarter, Notre Dame fans were loud and rowdy. Many reeked of alcohol from the all-day party around the game. When officials made a couple of calls that Notre Dame fans did not like, it was the most vulgar language ever uttered at a football game. The vulgarity came not only from the men, but the women Notre Dame fans too. One particularly loud woman was uttering words that likely took weeks of penance—and she yelled them right in front of children sitting with her.

This older man was one of the many who were already intoxicated before they entered Sun Life Stadium.

It is not drinking that is the problem. It is heavy drinking and the culture that encourages drinking and aggressive taunting.

LSU’s problem is not unique. They have more vile fans because they have more heavy drinkers. Mix that heavy drinking with jealousy over Nick Saban and Alabama’s dynasty and you have a nasty combination.