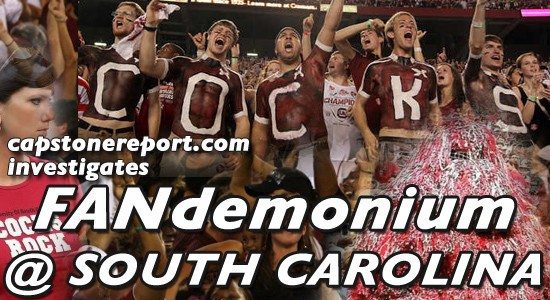 We’re on a three week journey examining the fanbases of each of the fourteen SEC schools. Yesterday was Tennessee; today we’ll stay in the SEC East and examine the Gamecocks.

When you think of South Carolina, what do you think of? Of late, the Gamecocks have been a pesky bunch. Their fans are passionate, but the source of that passion, like Texas A&M, is somewhat of a mystery.

As we pointed out in our review of Alabama, our first in this series, Tide fans are spoiled. It’s easy to hate someone who is spoiled, because they usually have enjoyed privileges and luxuries you haven’t.

It’s easy to be a fan of a dominant football program like Alabama. But while at South Carolina it’s harder, one could argue it means so much more.

If you’re a South Carolina fan, say, younger than thirty, you have lived the glory years of South Carolina football. Though Gamecock football began in 1892, you’ve witnessed all six of South Carolina’s bowl wins. Eighteen bowl appearances, dating back to 1946, and six wins…the first coming in 1995 under Brad Scott in the Carquest Bowl.

The bowl win capping a 7-5 season in 1994 would be the lone shining moment for Scott, who was succeeded by the legendary Lou Holtz in 1999. The spittle-riddled coach would finish his career at USCe 33-37, highlighted by back-to-back wins over Ohio State in consecutive Outback Bowls.

As a Gamecock fan, it had never been any better. Let that sink in for moment.

Then came Stephen Orr Spurrier. When Steve Spurrier’s failed NFL experiment came to a painful end, the University of Florida had a coach, and a good one in Urban Meyer. So the ole ball coach decided to combine his two loves––golf and coaching, and the Palmetto state was the perfect landing strip for both.

Spurrier’s track record of creating momentary success at a historically failed program, then acting like it has always been that way, made him a perfect fit for South Carolina. After taking the SEC by storm at Florida in the 1990’s, resulting in just one National Championship (despite a lopsided talent level at Florida during his tenure there), Spurrier fled a then dominant Tennessee program in its prime to try out pro football. When it was time to re-invent himself in the college game, and news broke that his new place would be Columbia, SC, the Gamecock faithful couldn’t believe their ears.

Again, as a Gamecock fan, it had never been any better.

The team that owns just one conference championship in its 121 year history (in 1969 while a member of the ACC) suddenly had what was then thought to be one of the premiere coaches in college football.

To quote the Beck song, Loser, Carolina fans thought “Things are gonna change…I can feel it!”

And to a degree, they were right. In Spurrier’s time at South Cackalacky he has doubled the number of bowl wins in the program’s history…from 3 to 6. In his eight years Spurrier has compiled an impressive 66-37 record. Some point to Nick Saban being 68-13, with two more wins in two less years on the job, but as Spurrier pointed out last spring, that’s no big deal at a place like Alabama.

Spurrier finally got the Gamecocks to Atlanta, their first appearance, winning the SEC East in the 2010 football season. Though they were skull-dragged by Auburn in its semicentennial run at importance, just being there was enough. You know?

Most notably, Spurrier has reversed the trend of losing to South Carolina’s arch, in-state rival, Clemson. Though the Tigers still hold a commanding 65-41-4 advantage, the Gamecocks have won 5 out of the last 7 while he’s been there. And as any Auburn fan will tell you, beating your rival should be your primary goal.

Why is all this history important? Why are we making fun of the University of South Carolina football program, pointing out its empty history from the standpoint of national relevance?

Because South Carolina has great fans. They have seen the Gamecocks do virtually nothing in their entire lives, and yet they pack Williams-Brice Stadium with 80,250 strong every home game.

The only point of discomfort with the Gamecocks is their love, maybe even preoccupation, for the word “Cocks.” The Gamecock fan will throw that word around like a Waffle House cook slings hash. The word, of course, is an obvious and open slang phallic reference to the male reproductive organ, and yet they’ll spray it everywhere. Hats, shirts, cars…even a toddler’s onesy…it doesn’t matter.

It’s uncomfortable, but hey. The Gamecocks know who they are, and they love their team. They love cheering their team as it runs onto the field to the song that began the movie Planet of the Apes. And it’s for this the Gamecocks are personally one of my favorite fanbases in the SEC.