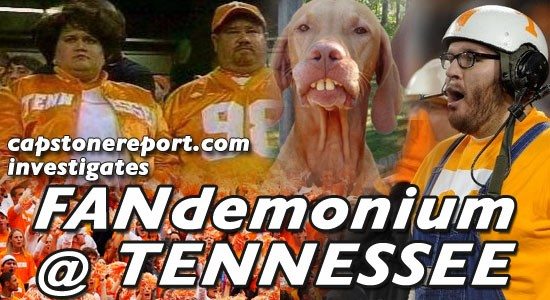 We’re on a three week journey examining the fanbases of each of the fourteen SEC schools. Yesterday was Texas A&M; today we take a hard look at Rocky Top.

Ah yes…Rocky Top—that obnoxious refrain, Smokey the blue tick coonhound and the Volunteer Navy are vivid reminders of what it means to be a Tennessee fan. Of course, so are Lulu and Junior.

But there are two better examples than any of those.

From the obesity to the douchery two men tell the story of Tennessee football’s present age—failed detective Phil Fulmer and Internet douche Clay Travis. These men are crybabies who have cried their way with Tennessee into irrelevance.

What made these men crybabies? Their obsession with Alabama. It turned the class of men like General Robert Neyland and Johnny Majors into faded memories. The Third Saturday in October became a time of hatred instead of a tough battle fought by men of great character. Rank-and-file Tennessee fans mirrored Fulmer’s obsession. Many Tennessee fans tell stories like Travis of a day when the Alabama Crimson Tide made them cry:

“Throughout my youth, year after year, Alabama beat Tennessee. It didn’t matter how bad the teams Bama trotted out wearing crimson jerseys were, the Tide won. That culminated in a 9-6 loss in 1990, a defeat so crushing that it represented the last time I ever cried over a sporting event.” (Source and more on Clay’s Rage)

Don’t let that quote fool you. Clay has been crying ever since. His stories of suits and Alabama football players was an inept attempt to derail Alabama. It didn’t work.

Fulmer’s obsession with Alabama led to clandestine meetings with Alabama turncoat Tom Culpepper. Time Fulmer should have spent on coaching was spent on gossip.

Naturally, rival fans were upset. So upset that one explained the hatred of Tennessee in this video:

“I just hate them. They are lowdown. They are dirty. They are snitches. I hate Phillip Fulmer. I hate their colors. I am not a dog person…I hate Neyland Stadium because it looks like a garbage truck worker convention,” said this Tide fan. As for Tennessee orange, this guy compared it to the puke orange like the inside of a pumpkin.

So much for the days when Alabama football coach Paul W. “Bear” Bryant invited Tennessee coach Johnny Majors to watch an Alabama practice. Majors was a class act and so were the Tennessee fans of that time. Fulmer and the Tennessee nation stabbed Majors in the back and soon turned their Byzantine methods on Alabama.

Here is what makes Fulmer’s story tragic—other coaches like Steve Spurrier, Houston Nutt and David Cutcliffe believed Alabama was cheating. Of course, these men did things in a more responsible manner and did not waste hours on stakeout trying to outfox Mike DuBose and his staff of recruiters.

Both Fulmer and Travis spent more time crying about Alabama than focused on their own team. That is what got Fulmer shown the door by Tennessee fans. By the end of his career, Fulmer sucked and so did the Vols. How much did Fulmer suck? They ran him off and hired walking NCAA violation Lane Kiffin. It was a hire that Volunteer fans cheered and embraced. They embraced him so much they held a riot when Kiffin bolted for USC only 14 months after becoming Tennessee’s coach.

But, at least at that point in January 2010, Tennessee fans still cared.

That only tells part of the story. Volunteer fans are so apathetic that they won’t even turn out for a radio station’s signing day party complete with a lingerie (or is that a bikini?) clad hot girl serving as their fax cam girl.

So, at this point, we are left with the conclusion that Tennessee fans are the most pathetic in the SEC. Why? It’s simple.

When Alabama was faced with the malaise days of Mike Shula, Dennis Franchione…even Mike Dubose, Bama fans still showed up and Bryant-Denny was filled. It was this dedication that made it possible for a good coach to regain Alabama’s footing.

But right now, it’s easier to give away tickets to a Lyle Lovett strip show than a Tennessee football game. The Volunteer nation has rolled over, and what was once a formidable force to be reckoned with is no more. It’s why highly touted in-state recruits like Dont’a Hightower and Vonn Bell spurn the Volunteers for greener pastures in places like Alabama and Ohio.

If there was a college football Cialis, Tennessee needs it, and in high dosage.

But it’s understandable that they’ve thrown in the preverbial orange towel. Right now, Tennessee is Vanderbilt’s bitch. How the mighty have fallen. Tennessee used to be Alabama’s bitch.