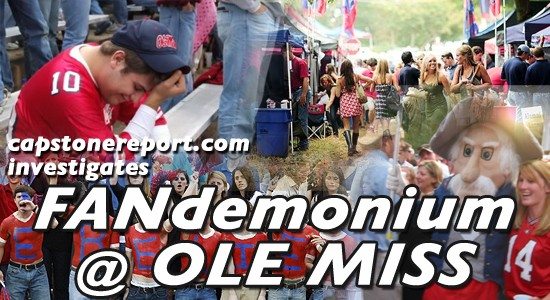 We’re on a three week journey examining the fanbases of each of the fourteen SEC schools. Yesterday we dared to wander into the world of the LSU fan. Today we get out our fine china and head to Oxford.

Talk about football at Ole Miss someone automatically mentions the Grove. Apparently we have to act like nobody tailgates under tents on campus anywhere but at Ole Miss. I literally remember my first trip to Oxford, looking forward to walking through and seeing what all the fuss was about. The only difference I saw was people eating on fine china, and some of the tents had chandeliers hanging from them. The gaudy display reeked of self-aggrandizement, or maybe just desperation to establish some sort of dignity in losing.

Ole Miss fans like to dress up to come see their team get beat. Argyle sweater vests. Red pants. Bow ties. Seersucker suits. Seeing the Black Bear Rebel Thingies come close but not quite get it done again is cause to really deck yourself out and dress to the nines.

Ole Miss fans pack their impressive 60,580 seat stadium on game days ready to yell the kind of cheers that would make any Texas A&M fan proud:

Now there’s a profanity laden cheer that a father can share with his young child.

I’m serious, I’ve just shared with you the highlights of Ole Miss football. When talking heads speak of Ole Miss, these are the things they lean on. Tailgating (which again, no one does but at Ole Miss), dressing up and the Hotty Toddy cheer. These talking heads almost always get that look in their eye, like “they lose, but look how much fun they have doing it.”

And you know what? There’s something to be said for that. I think we at Alabama get too wound up in winning National Championships, racking trophies, and being the best in the nation. Maybe we need to learn from our Black Bear Rebel Thingy friends and just have more fun.

Perhaps Ole Miss fans have to rely on having fun out of frustration. I mean, if Alabama’s mascot had gotten caught up in the tidal wave of political correctness, we might be embittered, needing a side road to divert our frustrations too.

The Ole Miss fan was forced by political correctness to shed his white, civil war era plantation owner mascot in favor of a black bear. Son, that’s just, I say, that’s just downright wrong. Let racists be what they want to be. Is this not America? Do we not have rights anymore? Can we not shackle whom we choose? It’s frustrating, really.

It must be terribly frustrating being forced to ignore, even change your heritage to accomodate the winds of the current political climate. And students, of all people, should have a right to express themselves however they choose, shouldn’t they? And I’m certain those students conveyed the sentiments that were expressly their own, and not those of their wealthy white families financing their education at the University of Mississippi.

Still, with all this apparent problem with racism, it made complete sense for some of the top black athletes in the nation to want to sign with Ole Miss earlier this month. Following a 7-6 season under new coach Hugh Freeze, who was coaching high school football a short time ago, Ole Miss somehow harvested the #7 signing class in the country, according to Rivals. What a recruiting effort!

Even if their top recruit didn’t know the correct name of the University with whom he was signing, it was no matter. “If he has broad shoulders and a strong back, he’ll be of good use to us,” some Black Bear Rebel Thingy fans told themselves.

But unlike some of its SEC sisters, at least Ole Miss has some tradition relative to the field of play. The Black Bear Rebel Thingies claim three national titles, though they all came around the time John F. Kennedy was president. They own six conference titles, and as recently as 2003 claimed a share of the SEC West crown. They were shut out of Atlanta by way of a tie-breaker, but some Rebel fans were overheard saying there was probably nother there to see anywhere, since it burned and all.

The face of Ole Miss football is still Archie Manning, who they’ll roll out at any opportunity in an effort to rub their shoulders with accomplishment. I would too, as the Manning family is quite extraordinary with Peyton’s and Eli’s successes as well. But every time Archie shows up on the CBS set, is there a more obvious effort by Ole Miss homer Tim Brando to try and prop up the school where his daughter is enrolled?

So today we salute you, Ole Miss fan. Your history is as white as freshly fallen snow, but your future is a black bear with an Ole Miss hat on. Oh, and more 7-6 finishes that are somehow grandfathered in as successful seasons.

22 thoughts on “FAN REVIEW––Ole Miss: A culture of supremacy”