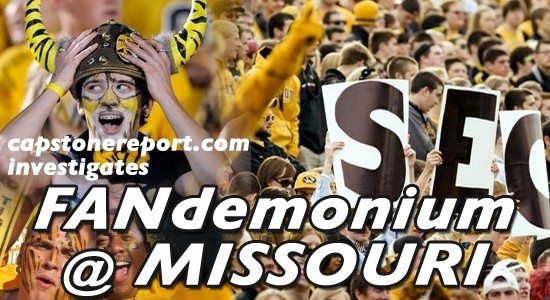 We’re on a three week journey examining the fanbases of each of the fourteen SEC schools. Wednesday was Kentucky. Today we visit the greenest member of the conference, Missouri.

Life in SEC football is nasty, brutish and short. Just ask Vanderbilt. It is a merciless gauntlet of brutality on and off the gridiron.

Missouri’s first campaign as a member of the Southeastern Conference was a chance to get acquainted with the new school, its team and its fans. Alabama traveled for a meeting in what turned into a deluge. However, there were no criticisms of Missouri fans behavior.

This mirrored Georgia’s experience when their fans traveled to face Missouri. UGA fans summed up Missouri this way: their fans are too nice. According to USA Today, “I don’t think they know what they’re getting into,” Steve Molinari said. Another fan said, “I think it’ll take a year for them for it to sink in what they’re in for,” Kip Hicks said. “They don’t hate us yet. They will soon.”

Yes. Missouri fans, you will soon hate your new SEC brethren. It won’t be the hate you had for arrogant Texas Longhorn fans. Unlike the folks in Austin, the SEC functions as a team in matters of business. But in matters of football, look out.

What? You expect the NCAA to supervise things and keep it from getting out of control? The most corrupt episode in modern football was Cam Newton being allowed to play football in the SEC Championship Game following damning revelations that his father shopped his services. Sure, the NCAA is once again snooping around Memphis in regards to grade changes involving an Auburn player. However, you can’t depend on anyone in Indianapolis or Birmingham to help you out.

God (and Mike Slive) helps those who help themselves.

Hey, it was the motto of Ole Miss’ recruiting this football season.

Mizzou fans need time. With time comes experience. You will experience the unique ways SEC football programs fight. It will piss you off.

While it won’t be as obvious as your days in the old Big Eight where officials gave Colorado five downs, it will be infuriating when a new rival steals that recruit at the last second as one of your commitments that has never even heard of a school down the road signs without ever visiting campus. Or, you travel to cheer on your team at LSU or Auburn and one of their charming fans flicks a cigarette on you…then, you will hate the other team and their fans.

Traditions
Mizzou has a few traditions of its own. Last season, fans were encouraged to wear gold to games. There was even a blackout game where everyone wore black. If this is the kind of “game” Mizzou fans plan on bringing to the table, they better step it up.

In time, Mizzou fans will learn gimmicks don’t work in big boy football. In fairness, it is a lesson a few old SEC teams (Georgia) need to learn. Blackout games won’t change the talent disparity on the field or impotent coaching. Things like that only matter if you let them matter, and teams like LSU or Alabama are experienced with playing in crazy environments. A fan’s sartorial choice won’t intimidate them. Best example: Alabama vs. Georgia 2008. Not even new jerseys helped save Georgia.

Right now it is too early to give a full account of Missouri in the SEC because there just is not enough history between us and Mizzou. Nonetheless, there are a few general conclusions that can be offered with one season of interaction with Missouri fans. Mizzou and its fans are inexperienced and do not hate their new rivals—yet. It won’t take long though. Get to know Auburn or LSU fans and you might wish you were back in the old Big 8…yeah, not even Auburn and LSU would make anyone want to go back into the Big 12 and bow down before Texas.

5 thoughts on “FAN REVIEW: Missouri fans have much to learn about life in the SEC”