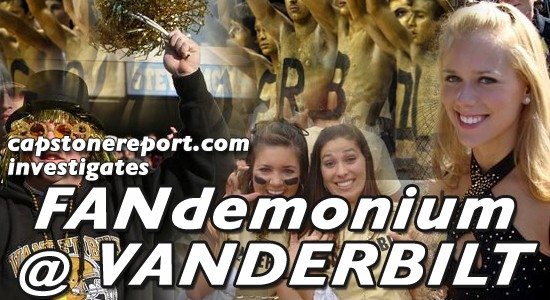 We’re on a three-week journey examining the fanbases of each of the fourteen SEC schools. Yesterday was South Carolina; today we’ll stay in the SEC East and head to Nashville.

Vanderbilt fans are an example of everything right in college football. Commodore fans persevered through 123 seasons of football in what was mostly a losing season after losing season. Vanderbilt’s all-time record is 572-579-50. That is worse than the President’s record on the economy, or Katy Perry’s last, well record.

Those last two season records are important. The 2012 season saw Vanderbilt fans rewarded with a special treat. It was Vanderbilt’s first nine-win season since the 1915 squad went 9-1. The only other time a Vanderbilt team hit nine wins was in 1904. There have only been six bowl games in the history of the program, and these last two seasons represent another first—back-to-back bowl games for the Commodores.

The buzz around the program is growing louder. There is more demand for football tickets. Vanderbilt attendance was up 15 percent during the 2012 season. And with Vanderbilt’s latest win, the demand is growing. Just this winter Vanderbilt created a waiting list for football season tickets.

The enthusiasm is growing because people realize that Vanderbilt has replaced Tennessee as the dominant program in the state of Tennessee. The power has shifted from Knoxville to Nashville.

The core of Vanderbilt fans are the ones to be admired. They were not the fair-weather fans like their Volunteer counterparts. No, Commodore fans stuck with the program even when things were going poorly. Every so often, a new coach was hired. New promises were made. Yet, Vanderbilt never seemed to move forward.

Even when an excellent coach like Bobby Johnson was at the helm, things were still sluggish. It seemed like Vanderbilt would never put it together. Now there is real momentum in Nashville.

Anchor of Gold declared this year’s recruiting class “Vanderbilt’s greatest recruiting class ever,” and in another post asserts, “This talented crop of players should be a key ingredient as Vanderbilt pushes towards a SEC Championship.”

It is this kind of optimism that has allowed Vanderbilt fans to endure the bad and celebrate the good. It is a fandom with a proper balance. These are fans with perspective.

Football is not life, but a supplement to the educational experience of the campus and a unifier for alums and the present university.

There is something charming in the intimate stadium atmosphere. You can sense the old spirit of college football—a place less spoiled by the influence of ESPN and CBS. It is a place where the academic mission of the university is not forgotten in an attempt to win the football arms race.

Vanderbilt fans run the football program differently than Alabama fans. Alabama fans demand accountability and have been known to meddle in the program. Vanderbilt fans show patience and take a far more hands-off approach. This makes James Franklin the perfect hire. He is a good chief executive that fans know will do what is necessary to make the program competitive.

Vanderbilt fans give Franklin something in return. Unlike the rats jumping off the sinking ship in Knoxville, Vanderbilt fans remain fans through the good and bad.

Vanderbilt fans are starting new traditions as the football team shows real signs of improvement. There is the Star Walk (began in the 1990s), Victory Flag and Vandyville (launched in the 2000s).

However, it was the decision to hire James Franklin that has made a real difference in the life of the Vanderbilt football. Franklin promotes the team and how football can bring everyone in the university together.

He fits at Vanderbilt. Unlike a former coach Gerry DiNardo who once said “The very nature of Vanderbilt’s program caters to cynics, and we’ve got to change that.” That is not true. Vanderbilt fans always wanted to win. They just needed he right person.

19 thoughts on “FAN REVIEW: Vanderbilt fans are model for all SEC football fans”