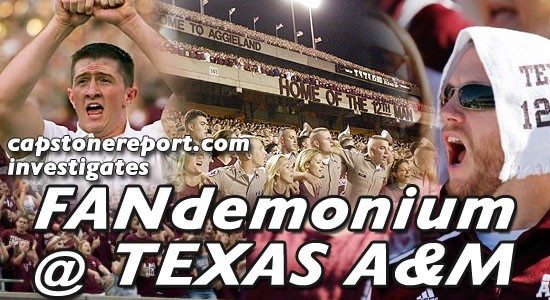 We’re on a three week journey examining the fanbases of each of the fourteen SEC schools. Yesterday was Alabama; today our next stop is College Station.

Everybody has that one family member who’s just a strange bird. You know, the odd uncle you have to warn your girlfriend about when she’s about to meet him for the first time. That freak cousin who’s gone goth, and cuts herself. The brother who leaves the family “to find himself” then comes back much later strung out on heroin.

For the SEC, that odd bird is Texas A&M. If you were to jump in a time machine, go back to the 1930’s, and bring a football program back to 2013…or specifically its fans…you’d have the Agricultural and Mechanical College of Texas.

Like cute cheerleaders? Well then forget Texas A&M. They ain’t got any. Instead they have five male yell leaders dressed like ice cream soda shop waiters from 1951 that lead the crowd in diacritic chants, all the while contorting their bodies into positions that would lead Jerry Lewis to having a telethon for them. Their cheers…excuse me, “yells”…resemble the “Rah, rah, shish-boom-bah” bull crap that died out 80 years ago. In fact, here’s an actual yell you can hear at any game:

This one is called “Locomotive”
[Pass Back: Hand looks to be pulling a train whistle, reaching upward and twisting on downward motion]

Simply put, if today’s fan is an iPhone, the Texas A&M fan is the old party-line phone that preceded the rotary dial. “Sarah, get me relevance…”

The school was established in 1876 as a military institution, and today over 2,200 of its students are members of the “Corps of Cadets.” Think about this group like the ROTC program at your old school. This group carries zero military obligation once they graduate, so you can walk around school, dress and pretend like you’re a soldier, then graduate and go sell insurance. Some do go on to military futures, but others gear up, parade around and for four years just act like they’re active duty military. I’m sorry, but it’s just peculiar seeing grown men do this.

A Texas A&M fan is called an “Aggie”. In the early 1900s A&M students were referred to as Farmers. The term Aggie began being used in the 1920s, and in 1949, when the yearbook changed its name to Aggieland, Aggie became the official student body nickname.

Like so many other screwed up SEC schools that can’t decide what they are, the TAMU mascot is a dog. A bull-dog? No. A pitbull? Nope. How about a full-blooded collie; Lassie, if you will. “Reveille,” or “Miss Rev,” is the highest ranking member of the Texas A&M Corps of Cadets, and can be seen around campus attending classes or events.

Do you see why this bunch is just freaking weird? Oh, here’s another yell for you:

Sky Rocket
[Pass Back: Slap hands together with right hand moving upward and index finger pointed to the sky)

Texas A&M was waiving towels long before former Auburn assistant Trooper Tayler ever picked one up (Auburn ripping off another school’s traditions? Strange). The tradition actually didn’t start though until 1985, known as the “12th Man Towel”. Fans wave towels instead of shaking shakers. The “12th Man” tradition started on January 2, 1922, when the Aggies were playing defending champion Centre College in the Dixie Classic, the bowl that preceded the Cotton Bowl. The game produced so many injuries that head coach D.X. Bible feared he wouldn’t have enough players to finish the game. So he called on former play E. King Gill from the stands to suit up in an injured player’s uniform. Gill had quit football to play basketball.

The 12th Man tradition has taken many forms. Under Jackie Sherrill in the 1980’s, the kick-off coverage team was made up solely of walk-ons, allowing just one touchdown return in its time. R.C. Slocum reeled the tradition back a little, limiting the participation of one walk-on player who would wear the number 12.

Last season Johnny Manziel sometimes made it feel like opponents were playing against a twelfth man. But for a moment, forget Johnny Manziel, the dominant out-of-nowhere little quarterback. Historically, Texas A&M has been hardly anything but Manziel-like.

In fact, the Aggies’ decision to join the SEC was largely an effort to get out of the shadow of its mean, bullying older brother (the University of Texas) as much as anything else. Texas’ dominance in the Big 12…and in that region of the country in terms of revenue share, recruiting, and public interest…made the Aggies’ jump to the SEC a logical move. If you can’t beat’em, move away from ’em.

Prior to joining the SEC in 2012, Texas A&M had fallen to the Longhorns 11 out of the last 16 years, including a 6-year skid from 2000-2005 that finally ended with a rare Aggie victory in the 2006 season. Sound familiar, Bama fans? But instead of reaching down and doing what it took to stop the bleeding of losing to your rival repeatedly, the Aggie nation ran.

More on that in a second. But first, another yell, this one called, Horse Laugh:

Horse Laugh
[Pass Back: Hands with fingers straight are held palms together, and then hands move back and forth in a pointing motion]

Okay, back to Texas-Texas A&M. From the rivalry’s beginnings, it took nine years for the Farmers (as they were called then) to even score on the Texas Longhorns. The first game came in 1894 with a 38-0 Longhorn victory…so bad that in 1895 TAMU didn’t even field a team. In the 117 year history in the series, Texas boasts a 76-37-5 record against little brother. And remember, this is against Texas we’re talking about…the program that has done less with more than possibly any other school in America.

In fact, unless you’re Baylor, Rice, SMU or TCU, Texas A&M doesn’t own a lopsided all-time winning record against you. Even Arkansas holds a 41-25-3 advantage over the Aggies.

So why is this information important? Because it means this eccentric bunch of weirdos have stayed the course, remaining passionate and true to their school and team despite results. In an odd sort of way, that’s kind of commendable.

Texas A&M and Alabama share a few commonalities, mainly coaches like Bryant, Stallings and…ugh, we both agree…Franchione. But if Alabama is the budding supermodel at the Thanksgiving table, Texas A&M is the peculiar poet with a thousand piercings at the other end.

Welcome to the SEC Texas A&M! We’re glad to have you…sort of.