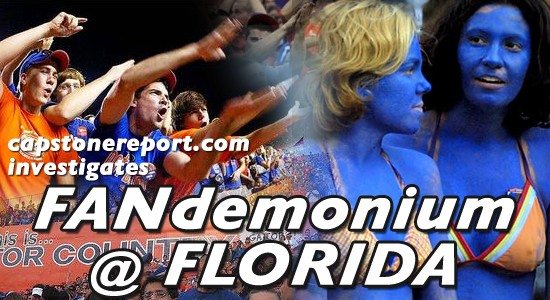 We’re on a three week journey examining the fanbases of each of the fourteen SEC schools. Yesterday was Ole Miss. Today we put on our jorts and head to Gainesville.

While it is easy to forget over the last few seasons, Florida does play football. Yes, this is true despite this season’s Sugar Bowl or last year’s Alabama victory in Gainesville. Florida football has an interesting history that has shaped its fans.

A roller-coaster ride from poverty to the penthouse is the best way to describe the life of a Florida Gator football fan. Much of his life was spent with a deficit of wins against his major rival the Georgia Bulldogs.

But one man changed all that. One man moved Florida fans to a deluxe unit in the sky or at least into relevance.

Prior to Spurrier’s arrival, its chief rival was Georgia and the Bulldogs dominated the series. Georgia dominated the series from the first meeting in 1904 until the 1950s when Florida became competitive and posted two four-game win streaks in a row between 1955-1958 and 1960-1963. Of course, Georgia dominated again during the Dooley years. Spurrier changed the series. He went 11-1 against Georgia winning seven games in a row from 1990-1996 and his last four in a row from 1998-2001. Ron Zook and Urban Meyer continued the series dominance over Georgia. Since 1990 Florida has won 18 games and lost only 5.

Florida fans were, let’s be honest, accustomed to losing.

After Spurrier arrived and won a few SEC titles, it was like a drunken sailor with a wad of cash. Or like someone Alabama fans might remember—basketball player Latrell Sprewell buying mansions and yachts with reckless abandon. There was an arrogance in the fans that bubbled up from a combination of newfound riches and a past of deprivation.

The trash talk coming from Florida fans was unbearable during the late 1990s and early 2000s. That is one reason that I enjoy the 1999 SEC Championship Game. Idiot coach Mike DuBose destroyed Steve Spurrier and the Gators 34-7—and it wasn’t even that close.

Of course, that did not slow down Florida’s smugness.

Some of the confidence and pride was reasonable. Florida produced an unparalleled level of success during its run under Spurrier and Meyer. It was remarkable and deserves praise. Florida fans should praise its athletic leadership for knowing when to pull the plug on Zook and making the move to Meyer. This type of decision improved the floundering program and let it continue as the best program in the SEC East for most of the last decade.

Florida has slipped below Alabama, LSU and is now fighting to stay ahead of rivals Georgia and South Carolina. This does not sit well with fans—fans who expect dominance and excellence.

In 2011, following Alabama’s thrashing of Florida in Gainesville, one Florida football player showed an Alabama fan who was boss. Former Alabama player Reggie Myles attended the game and Florida defensive lineman Dominique Easley got into a confrontation following the game. It was so violent that Easley separated Myles from his soft aluminum chicken wing container.

Is this a return to Florida’s traditional place as a mediocre SEC team? Has the surge upward like a dotcom stock price stopped and come crashing down?

Fans will be watching key games against Georgia and South Carolina next season as indicators.

Whatever happens, Florida fans have one thing in their favor—an athletic department administration with a proven track record for making the right calls and knowing when to make coaching changes.