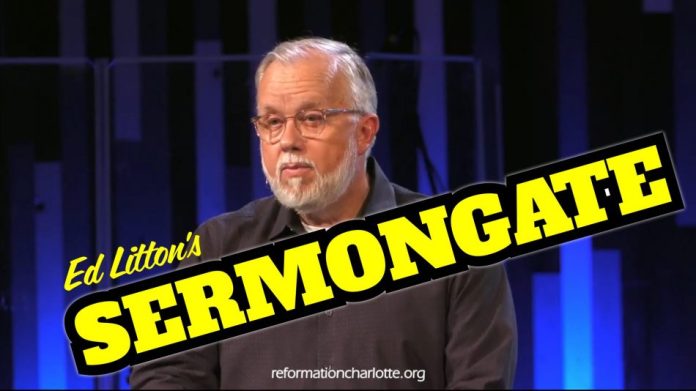 Ed Litton, President of the Southern Baptist Convention, is embroiled in a plagiarism scandal. It shows no signs of abating. The plagiarism allegations have exploded from one sermon to multiple ones dating back at least as far as six years. The church removed hundreds of sermons from its website prompting the scandal to be called Sermongate—reminding everyone that a coverup is usually worse than the underlying scandal. Here is a timeline of the scandal tainted Ed Litton SBC Presidency.

On the same day, the story rocketed to national attention as Dr. Robert Jeffress discussed the theological problems with Litton’s stance about homosexuality based on Romans 1.

Dr. Jeffress speaking on the Todd Starnes show said, “When you go to Romans 1, when Paul writes about the topic of homosexuality, he doesn’t use his whisper voice. He says that it is unlike any sin in the universe because it is not only the cause of God’s judgment but a result of God’s judgment. Paul said when people reject the truth about God, He gives them over to homosexuality, to what the Bible calls degrading passions and unnatural acts.”

This video lasting about seven minutes created a firestorm and sent Internet sleuths searching for other examples of plagiarism from Ed Litton.

By later on June 26, Ed Litton’s Redemption Church turned the plagiarism allegations into a full-fledged scandal when it removed at least 140 videos from YouTube.

It immediately drew the approval of some SBC Elites who praised the now admitted plagiarist. We pointed out how SBC Elites including academic leaders like SEBTS President Danny Akin—the most influential SBC President following the latest SBC Election—SEBTS Provost Keith Whitfield and former SBC President James Merritt all praised Litton by calling him honest, transparent, etc.

Naturally, we mocked these claims pointing out that SBC Elites are telling everyone that “Ed Litton’s plagiarism is a model of integrity and Ed Litton’s hiding the evidence on YouTube is a model of transparency.”

By Monday, June 28, 2021, the scandal hit high gear with new allegations that Ed Litton bragged he lied about his sermon preparation time. This shows that Litton and Redemption Church’s actions of hiding the sermons sent people online looking for more things Litton failed to hide.

And this search turned up a wealth of new information.

Justin Peters published an excerpt from Litton’s latest public sermon of June 27, 2021, where Litton appears to borrow and claim for his own a story published by a female Christian writer.

Here is a video compilation of similarities found in the sermons on Romans 13.

They also found similarities in multiple other Romans sermons.

By June 29, Redemption Church released a statement defending its action to remove hundreds of sermons.

On June 30, Ed Litton told a different story about the removal of sermons in an interview with the Washington Times.

The Washington Times penned a follow-up story on July 2 pointing out what some claimed to be inconsistencies in Litton’s and Redemption Church’s stories.

Also, on July 2, Ed Litton appeared on SBC This Week to talk about the scandal and attempt to pivot away from his personal ethical sins to discuss his plans for a sex abuse investigation. Litton’s comments raised many additional questions about what SBC seminaries teach preachers regarding plagiarism and academic standards in SBC institutions. This is given additional importance given the fact some SBC leaders like Danny Akin and Keith Whitfield praised Ed Litton.

Our story on Ed Litton’s lack of clarity regarding the Plagiarism Scandal was covered by Newsweek.

Belying the narrative established by J.D. Greear and Ed Litton that this was only about the 2020 sermon series on Romans, the Capstone Report was able to reveal the extensive borrowing occurred much earlier than previously reported.

What is next? We will update.