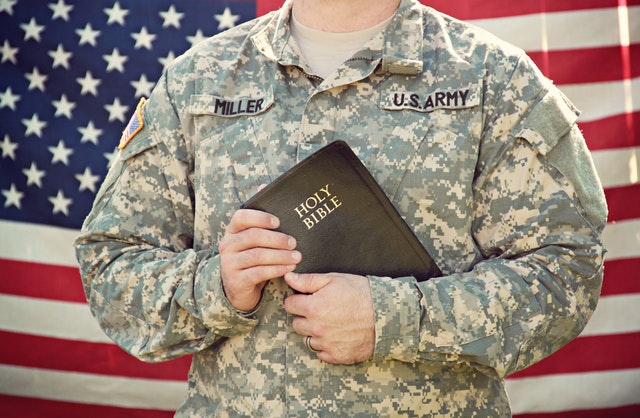 The hate America crowd is now firmly in charge of many American churches. They teach a disembodied message that neglects our physical duties to our nation. Yet, at the same time, these teachers demand greater social programs at home and around the world so that we can love our neighbors. This is an absurdity. Fortunately, there are voices of conservative Christians calling Americans to faithfully discharge their duties as citizens of heaven and citizens of this world.

“We do it to celebrate our foundation as a Christian nation and to remind people of that truth,” Dr. Jeffress Dr. Jeffress said on the Todd Starnes Show about flying the American flag. “I’m very clear, if ever there comes a choice between obeying God or obeying government, as Peter said in Acts 5:29, we ought to obey God rather than men. There is no contest of loyalties when it comes to the American flag or the Cross of Jesus Christ. But that doesn’t mean we cancel out or erase our Christian heritage.”

Dr. Jeffress is advocating a balanced approach. It is an approach that understands Christians are citizens of two kingdoms. There is an attachment and duty to the kingdom of this world. To reject this is to misunderstand Christianity. In fact, it is a type of spiritual Gnosticism. The Apostles make clear the Christian has duties in this world.

Another advocate of balance is Mark D. Tooley, president of the Institute on Religion and Democracy. Tooley said that Christians should take a balanced approach to patriotism. Also, he said the American flag is not necessarily an idol.

He also said, “Hyper-patriotism can be idolatrous but perhaps more acidic are ingratitude, disdain, smug contempt, indifference. Christians in every country should love country. Americans, even most disadvantaged, are among world’s most privileged & must be grateful if self-aware. #July4th.”

Tooley tweeted, “USA flags (or any national flag) quietly at side of sanctuaries aren’t idols of empire but silent reminders of earthly duties.  How do Christians love & speak to society without acknowledging that society? #July4.”

Rod D. Martin, a member of the SBC Executive Committee and a member of the Conservative Baptist Network, pointed out that fears over making an idol of America are ad hoc.

“It has become very trendy, certainly among young pastors, you are supposed to love your city and love the world but you are supposed to hate anything that is bigger than your city but smaller than the world, which seems really weird and discordant and not at all logical,” Martin said. “There is a feeling that if you are a patriot that you are making an idol of America. That’s silly. You love your family and that is required of you.”

Martin said that all Christians should love their country regardless of “wherever we are.” He cited Jeremiah as the source of how Christians, even in exile, are to pray for their city—which Martin says reflects Jesus’s command to love our neighbor.

Conclusion: Our Liberties are a blessing from God that must be preserved

Christians have duties in both spiritual and physical kingdoms. Neglect of the spiritual tends to make us apostates. Neglect of our duties in the physical world makes us, as the Apostle said, worse than pagans. Thus, balance is required.

Our liberties are a blessing from God that we must hold in trust for our children and future generations. This July 4 is an opportunity to rededicate ourselves to this sacred duty—a duty given to us by God.