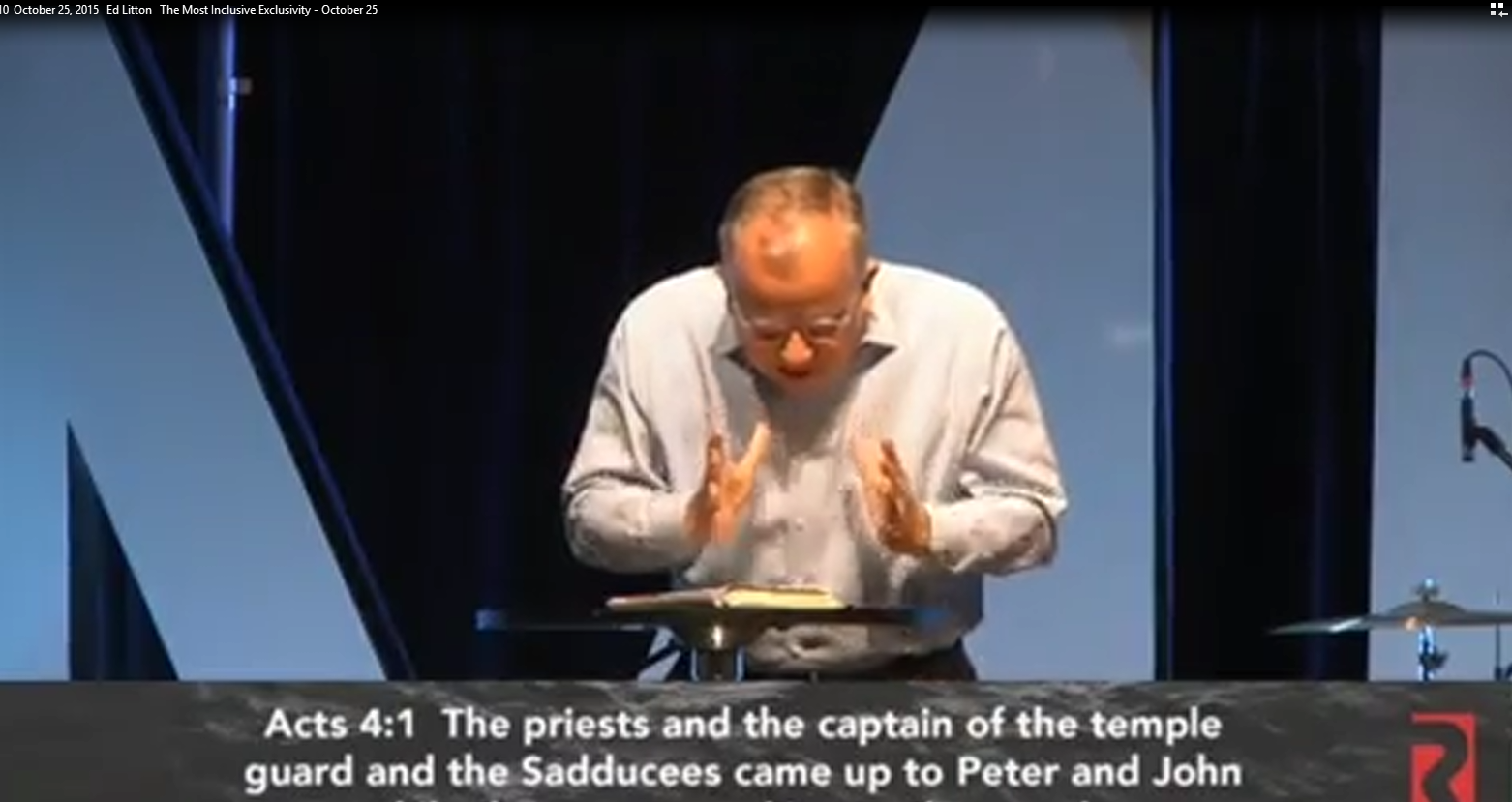 Greear’s sermon made use of an opening two points examining how contemporary society rebels at the idea of exclusive truth—that God demands salvation in the name of Jesus.

Greear’s first point, “It’s like you’ve got somebody who has never heard about Jesus, and the moment they die, God shows up at their deathbed and says, ‘AHA! You didn’t receive Jesus!’ And they are like, ‘Jesus, who? I never heard about any Jesus!’ And God says, ‘Well, it’s too late now!’ And He casts their souls into Hell, and as they go tumbling into Hell screaming ‘wait, wait’ he mumbles in Latin something like ‘tough cookies’ at them.”

Litton’s first point, “People that I’ve talked to will often paint this picture of a cruel God. There is a guy on his deathbed and I’m going to throw you into Hell, and the guy goes ‘Wait, wait! I didn’t hear. I didn’t know, there was another way and he hears, in Latin, ‘Tough Cookies. Boom.”

Greear’s second point, “And it is kind of an unwritten rule in our society that you don’t tell people their religion is wrong.

Litton’s second point, “It is never right to tell other people that their religion is wrong. What is amazing, is that in this passage Peter deals with both of those objections.”

When asking the congregation to open their Bibles, J.D. Greear said, “If you have your Bible, you can open it up or turn it on…I had a pastor who used to say he loved to hear the sound of ruffling pages…I do love to see the warm glow of Scripture on people’s faces.”

When asking the congregation to open their Bibles the passage in Acts, Ed Litton said, “Open your Bibles if you would. Turn them on. Warm them up. I love the rustle, the sound of pages of Scripture. I also, now, have to enjoy the warm glow of your iPad, iPhone, whatever your device is…”

Later in the sermon, Litton focused on the pluralistic setting of contemporary society. Something Greear previously did as well.

Greear said, “First, you should note that this is not a new controversy at all. People sometimes think that. They think that it came around with the COEXIST bumper sticker.”

What makes this exchange of particular interest is that Greear’s use of Coexist bumper sticker was not included in the sermon notes posted online. It was only in the delivered sermon. So, Litton must have reviewed not only the notes but the delivery of the sermon to craft his own performance.

J.D. Greear preached his sermon on or about October 6, 2013. Summit Church posted the Greear sermon to Vimeo on that date and on its website. Greear’s sermon notes are in downloadable format here.

According to the date on a video we reviewed, Litton preached his version of the same sermon October 25, 2015.

One item that aids in the dating of the sermon is that Litton mentions the church’s recent name change to Redemption. That name change took place in 2014. Also, we found more evidence in Google to verify the date of October 25, 2015.

If anyone wants to do a mash up of the sermons, let me know. I’ll provide the relevant files.