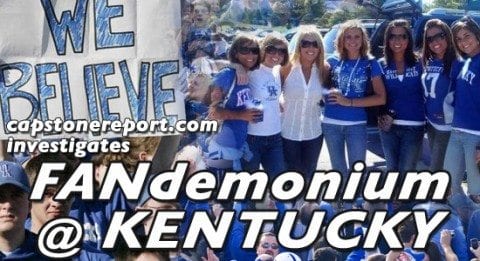 We’re on a three week journey examining the fanbases of each of the fourteen SEC schools. Yesterday was Georgia. Today we visit the Commonwealth, taking a look at Kentucky.

Jimmy Soul got it right way back in 1963. Not that he had Kentucky football in mind when he wrote the famous song, but that year Kentucky went 3-6-1 on the gridiron. That same year Kentucky Basketball finished 21-6, won the SEC and finished 3rd in the land…an “okay” season by Kentucky basketball standards.

The song goes on to explain why it’s best to marry an ugly chick. She doesn’t expect or demand much. She just knows she’s lucky to have you.

Kentucky football has had some shining moments in its history. Heck, in its first season of play (1894), the Wildcats went 5-2, finishing the season with a 38-10 thumping of Central University.

Paul “Bear” Bryant left his mark on Kentucky Football, coaching there eight seasons. With Bryant at the helm, Kentucky snapped Oklahoma’s 31-game winning streak in the 1950 Sugar Bowl, winning its first and only national title.

Don’t let your friends say you have no taste
Go ahead and marry anyway
Though her face is ugly, her eyes don’t match
Take it from me, she’s a better catch

Since then, Kentucky has had few bright spots. But the Kentucky fan doesn’t complain. He and she knows when toe meets football in early September, basketball season is just around the corner.

To me, Kentucky fans are incredible. In the basketball world, they are the hardwood’s version of Alabama football fans. If you played a Kentucky basketball game on the moon, you’d have 23,000 strong in blue and white ready to cheer them to victory.

But historically, outside of 1950 and 1976, when the Cats shared the SEC title with Georgia, there hasn’t been much to write home about when it comes to Kentucky football. But that’s not to say there hasn’t been anything to look at.

Commonwealth Stadium is a great place to watch a football game, and not just for the women…who for some reason look incredible in blue and white. It’s just another one of those throw-back stadiums, seating under 70,000 for an intimate afternoon of football. But unless you’re wearing different colors, entering the stadium on a fun road trip with your team, it’s hard to imagine why you’d go.

If the Cats can beat Western Kentucky and Miami of Ohio to begin its 2013 campaign…a feat that isn’t likely…they would bring their all-time football record of 580-582-44 up to .500.

The potential seems to always be there for Kentucky to become something in football. Heck, if South Carolina can come as close as they have to significance, Kentucky surely can.

But until then, the Kentucky fan will continue to don their blue and white, paint the UK on their faces, and expect very little. Because if you expect little, it doesn’t take much to make you happy.