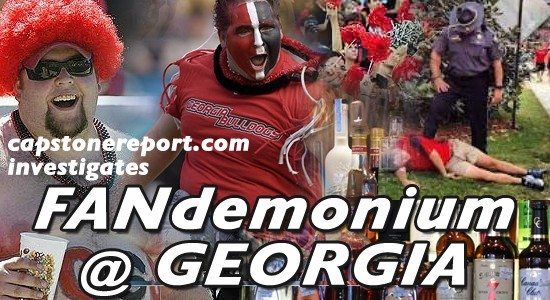 We’re on a three week journey examining the fanbases of each of the fourteen SEC schools. Yesterday was Auburn; today we *hic* examine the *hic* Georgia fan.

Yet, Georgia fans are known less for their erudite commentary and more for their behavior at football games.

Or, I should say before and after football games.

There is a reason Atlanta has drive-thru liquor stores. Georgia likes to drink.

The World’s Largest Outdoor Cocktail Party is one example.

All the tiny liquor bottles dropped at the SEC Championship Game as Alabama defeated Georgia is another. There were so many little bottles in our section—some consumed and some not—that I considered buying stock in a distillery. One Georgia fan was so angry and so intoxicated that as the Alabama Crimson Tide defeated Georgia for the 2012 SEC Championship, that he left a team jacket worth over $75 on his seat. It wasn’t surprising. This fan fell up the stairs in a fog of anger and alcohol.

Of course, most of that alcohol is imbibed before a game. Georgia fans have a habit of partying hard before kickoff. This is what makes them so…trashy.

I am not sure how Georgia fans treat other SEC schools, but when Georgia visited Alabama in 2007, there was a much bigger mess than usual on campus.

What can you expect when Georgia fans trash their own campus? In fact, the University of Georgia was forced to respond to the mess in 2009. Some described sections of the campus as looking like a “garbage dump.” Most Georgia alums were outraged at how students and alums were treating the tailgaiting areas.

However, this type of bad behavior is not only a thing of the past.

This season Georgia fans decided to be ever so trashy. They egged and rolled the home of Georgia quarterback Aaron Murray and linebacker Christian Robinson following Georgia’s loss to South Carolina.

Why did Georgia fans decide to trash their QBs house? Sure, it was a bad blowout loss at the hands of South Carolina 35-7. However, it isn’t like losing is rare for Georgia. Since the Blackout game against Alabama in 2008, Georgia and Mark Richt have underachieved. In the time from the loss to Alabama until the loss to South Carolina, Georgia was 6-20 against ranked opponents, according to this report. The brightest minds in college football wondered if Mark Richt might be on the hotseat. Commentators like Paul Finebaum summed up the Richt regime in Athens: “Some might say there’s no crime in losing to Boise State and South Carolina, ranked No. 4 and No. 11 respectively. Perhaps. But this has become the norm in Athens, a town that has seen five of its SEC brethren win national championships in recent years while the hometown team more closely resembled an EKG screen during cardiac arrest.”

Georgia is one of the most talent-rich states. It produces a significant amount of major college football talent. Yet, all this talent is not enough.

For all of Georgia’s history and for all of the Georgia fan’s arrogant talk, the Bulldogs have accomplished very little outside of the Dooley era. When your last taste of real significance came in Ronald Reagan’s first term in office, it’ll give you a taste for alcohol.

This has left many Georgia fans unfulfilled. And what do you do when you’re unfulfilled? You drink, apparently.

Georgia fans are diehard. One Bulldog fan’s obituary complained about a horrendous Georgia football loss to South Carolina. That is dedication and love. And longing for fulfillment on the football field. Maybe this is why Bulldog fans indulge so much in alcohol and trashy behavior.