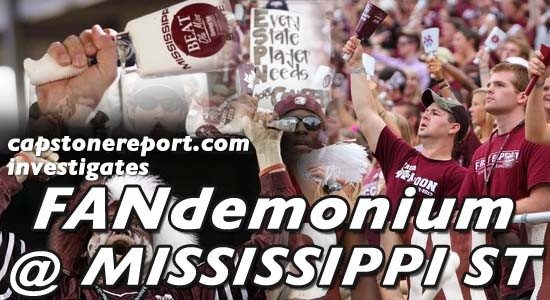 We’re on a three week journey examining the fanbases of each of the fourteen SEC schools. Our last visit was with Missouri. Today we travel 80 miles west to Starkville for a look at the really sad Mississippi State Bulldog fan.

What if your entire state of existence as a football program could be summed up with a cowbell? All your tradition. All your accomplishment. All your history. With this:

If you want a snap shot of the completeness, the entirety of Mississippi State football, it starts, stops and finishes with the existence of the cowbell.

“The most unique and certainly the most resounding symbol of Mississippi State University tradition is the cowbell. Despite decades of attempts by opponents and authorities to banish it from scenes of competition, diehard State fans still celebrate Bulldog victories loudly and proudly with the distinctive sound of ringing cowbells.”

The most resounding symbol? Not trophies, legendary coaches or even players…but a freaking cowbell?

Legend has it that during a Ole Miss-Mississippi State football game in the 1930’s or 1940’s (nobody knows the date because it didn’t really happen) a jersey cow wandered onto the playing field. State soundly defeated Ole Miss that day, so the fans adopted the cowbell as the symbol of good luck.

Like all good fantasies, if you’re a Mississippi State fan, you have to have a really good imagination to talk yourself into a new football season. Maybe “this” year will be the year, you say. A sound whipping of Memphis gets you all frenzied. Then like a smelly onion, the season unfolds one layer at a time, revealing yet another 7-5 football team.

Being a State fan is very similar to being a fan of other up and comers, that never really ever up and come. Fans of teams like Mississippi State have to do things like make believe a 7-0 start and #11 ranking really means something. Even though the meat of their scheduled bludgeoned them back into maroon and white reality, for almost two months in 2012 the State fan got to talk smack and see what it feels like to be part of a successful program.

Really at this point I’m just writing another paragraph to take up space, because I’ve already correctly summed up the existence in Mississippi State football with the cowbell.

What really stinks is when your biggest rival is an also ran like yourself, but they own you. Ole Miss owns the overall series by almost 20 games, at 61-42-6. And the Black Rebel Bear Things have really got it going on. State couldn’t cheat their way into getting Cam Newton, whereas Ole Miss seems to have this practice down to an art as of late. So beating even your in-state brother isn’t a goal you can put on your bulletin board with confidence any time soon.

Although, State can boast a trip to Atlanta over its in-state sibling. The Bulldogs made it to the big game 15 years ago, in 1998. They lost to the eventual National Champ in Tennessee, and haven’t sniffed Atlanta since.

When Mississippi State hired Sylvester Croom, the runner up to the Alabama job in 2003, the Bulldogs thought they had something. Even though nobody…nobody…considered Sly Croom a legitimate head coaching hire until ‘Bama interviewed him (after the Mike Price debacle), Croom emerged as the only real candidate for the job, eventually winning out.

21 wins and 38 losses later, 30 of those coming in conference play, State fans everywhere knew once again that rummaging through a rich man’s trash still leaves you with, well, trash. After five seasons, State fans knew the only way Sylvester Croom was going to Atlanta was if he was going for Freaknik.

Dan Mullen was the next big hire, and while he showed promise in his second season, the architect of the Tim Tebow offense…chortle…has failed to get State any closer than 4th in the SEC West, having won just 13 conference games in four seasons. Atlanta isn’t getting any closer.

But then again, all that doesn’t matter. The Mississippi State Bulldog fan isn’t about silly tropies and traditions. Or trips to Atlanta…or beyond…to compete for championships.

No. Give them the cowbell…and maybe an XBOX…and that’s all they need. Hail State!

7 thoughts on “FAN REVIEW: Mississippi State––Cowbells, and that’s about it”