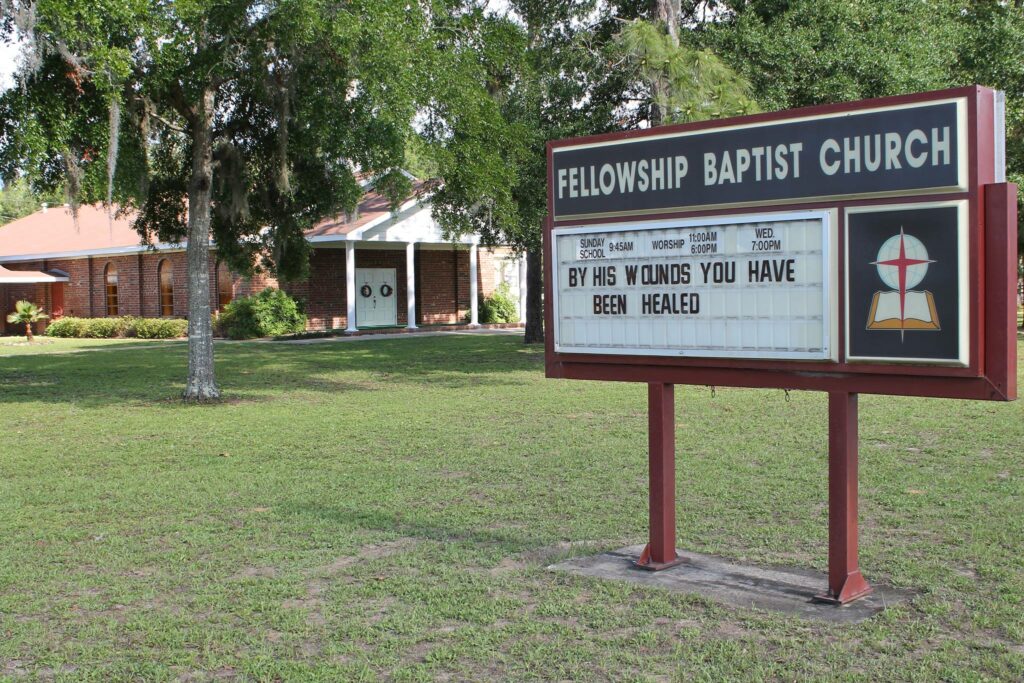 The continued leftward drift of the Southern Baptist Convention has pushed conservatives away from the denomination. Churches cite Russell Moore, SBC’s praise of Critical Race Theory, rise of Identity Politics along with women preaching as reasons to leave or not join the troubled denomination.

Fellowship Baptist Church was founded in 1981. It was a church plant of the Florida Baptist Convention. It is the only Southern Baptist church in Steinhatchee proper. But a letter of September. 20, 2019, formally ended the relationship with the local, state and national convention.

According to the pastor of Fellowship Baptist Church Jeremy Tatom, “The SBC leadership has left us.” And there is a fundamental concern over how the leadership is pulling to the Left.

“Right now their mission and our mission are not in agreement. Not the official, stated mission of the SBC because it is very biblical, but it is the liberal direction of its leadership. It is not what they say, but what they are doing. The promotion of Social Justice and Critical Race Theory and Intersectionality and the softening stance on homosexuality and women in the pulpit.”

According to the letter released by Pastor Jeremy Tatom, “We, Fellowship Baptist Church of Steinhatchee Florida, hereby renounce all membership, affiliation and any other formal association with the Southern Baptist Convention, and by extension, the Florida Baptist Convention and the Taylor Baptist Association. We will continue to hold firmly to the Word of God and to historic Baptist doctrine while affirming the 1689 Baptist Confession of Faith as our confession.”

The letter outlined a series of concerns including actions by the Ethics and Religious Liberty Commission (ERLC) of the Southern Baptist Convention, the progressive political views of ERLC president Russell Moore, questionable teachings presented by Southern Baptist Convention President J.D. Greear, problems with Lifeway’s promotion of “theologically heretical materials,” the promotion of Beth Moore in the SBC and the passage of Resolution 9 praising Critical Race Theory and Intersectionality.

Resolution 9 passed June in Birmingham during the SBC’s Annual Meeting. The Resolution praised the analytical tools of Identity Politics. It drew a strong rebuke from many Southern Baptists. Even Al Mohler pointed out the dangers of the resolution.

Resolution 9 is galvanizing churches to respond.

Peters tweeted, “Spoke with an SBC pastor this morning in NM who told me his church is currently drawing up the necessary papers to withdraw from the SBC. The reasons? Many, but Resolution 9 was the straw that broke the camel’s back. They’re gone.”

Spoke with an SBC pastor this morning in NM who told me his church is currently drawing up the necessary papers to withdraw from the SBC.

Many, but Resolution 9 was the straw that broke the camel's back.

We attempted to find out the name and identity of the church. However, so far, we’ve not identified the congregation. But, Justin Peters reporting it speaks volumes about how conservative Southern Baptists are responding to the open embrace of Identity Politics.

One church member tweeted, “Resolution 9 stopped our church in its track from proceeding to become a member of the SBC. So sad.”

In response to the Peters’ tweet, the atheist, Identity Politics critic and author James Lindsay pointed out that driving off conservatives is the very goal of those who embrace Intersectionality and Critical Theory. He said, “They want them to quit. They want to split coalitions.”

They want them to quit. They want to split coalitions. https://t.co/n9Py56O30M

This is a critical point. And it raises many difficult questions for conservative Christians. Stay in the SBC and fight or withdraw for purposes of doctrinal purity?

Pastor Tatom examined both courses, and even had a member raise this issue. He was told, “We should stay and fight instead of turn tail and run.” However, Pastor Tatom and a 2/3 majority of the church decided to leave the Southern Baptist Convention. Pastor Tatom explained:

“The majority opinion was that we are not called as Christ-followers to fight for the SBC. We are not called to fight for any para-church organization. There are times to stand and fight—and that is when we are standing firm on God’s Word. There is nowhere in Scripture that commands us to be in any denomination and much less to be distracted from the Gospel.”

The process of leaving the Southern Baptist Convention

For Fellowship Baptist Church, the process of leaving the Southern Baptist Convention lasted 18 months. It began in March 2018, when it cut money to the Cooperative Program and explored other options of direct support. At the time, the church gave approximately five percent to the CP.

There were fewer concerns over the Leftward drift then. “They’ve multiplied since,” the pastor said.

An April 17, 2019 hour-long quarterly business meeting was dedicated to this topic. A decision on membership in the SBC was postponed to see what happened at the 2019 Annual Meeting in Birmingham.

However, the Annual Meeting in Birmingham re-elected J.D. Greear and approved Resolution 9 (as we mentioned earlier).

The church letter mentioned Greear’s book teaching Christians and Muslims worship the same God and Greear’s mishandling of Romans 1 by saying the Bible only “whispers” about sexual sins.

The expectation is that more churches could leave the SBC following the Orlando 2020 meeting if a conservative is not elected as president. However, considering the concerns over Russell Moore and the beginning of the 2020 Presidential Election season, churches may decide to leave sooner rather than later to cease enabling the ERLC.

The future of the SBC looks smaller and as it embraces Racial Identity Politics, it will accelerate its decline.