Are Southern Baptists ready for a Progressive President?

J.D. Greear claims Christians and Muslims worship the same God. The stunning claims were made in his book and in an interview with The Gospel Coalition’s Trevin Wax.

From Greear’s interview with Trevin Wax:

“Trevin Wax: It’s helpful to lay these misconceptions on the table and to talk honestly about our differences. You make the case that Muslims do worship the same God as Christians, although with obvious errors in understanding. Can you elaborate on how you came to this conclusion and how you would maintain major distinctions between Muslim and Christian understandings of God?

“J.D. Greear: This is a tough question that has a considerable amount of complexity to it. But at the end of the day, I think the question of whether or not you use the Arabic name for God – Allah – is more of a practical question than a theological one.” 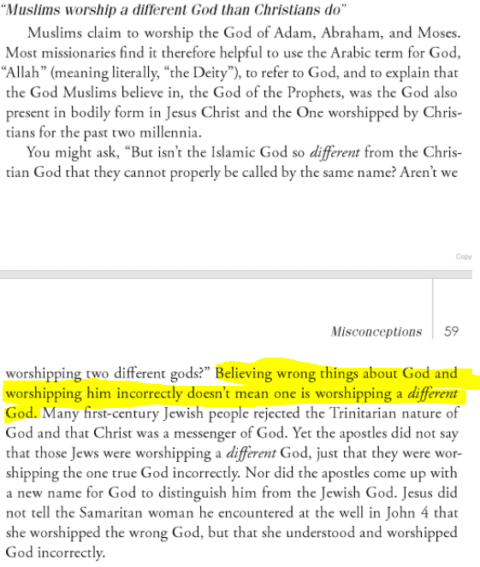 From Greear’s book Breaking the Islam Code: “Believing wrong things about God and worshiping him incorrectly doesn’t mean one is worshipping a different God” (p.59).

These statements commit fundamental philosophical and theological errors. Fortunately, there are many evangelical theologians and philosophers who have commented on this very issue and hold that Christians and Muslims worship a different God. It comes down to how we both conceive of God. Philosopher and Theologian William Lane Craig answered this question in a podcast that highlights the philosophical issues and play and the importance of God’s characteristics in settling the question.  Dr. Craig said, “What I’ve argued is that the differences between the Muslim concept of God and the Christian concept of God are so stark that Frank hasn’t given us any reason to think, in view of their non-identical properties, that they are worshiping the same God.” These properties would include God’s loving nature and the trinity among many others.

“Christians worship Yahweh, the Trinity, whereas Muslims worship Allah, a monad. This is not an incidental difference; Islam makes every effort to condemn the Trinity as blasphemy (4.171). The Quran rejects the relational aspects of God, saying that he’s not a father (5.18) and he’s not a son (112.3). It establishes its own doctrine of God, Tawhid, in diametric opposition to the Trinity, and that doctrine becomes the central doctrine of Islamic theology.

“Most people who say Christians and Muslims worship the same God are aware of this difference, but they treat it as relatively inconsequential. This is not a trivial difference, though; it has major implications…Ultimately, when we understand the Trinity, we realize that the doctrine is not just a theological curiosity. It has far-reaching implications for how we ought to live and how we see the world, and it makes the Christian God categorically different from the Muslim God.”

From a Reformed perspective, Dr. James White offered a practical and theological reason for rejecting the view that Christians and Muslims worship the same God. White said, “So the real question is: Do we worship the same God? Not that we are identifying the same historical deity back in the history of Abraham. In worship, we are talking about truly engaging with God as he has revealed himself. There is no way that any honest Muslim who believes in Tawhid and rejects the doctrine of the Trinity can say, Yes, we are worshiping the same God. Certainly from a Christian perspective that is what we have to say as well.”   Video available here.