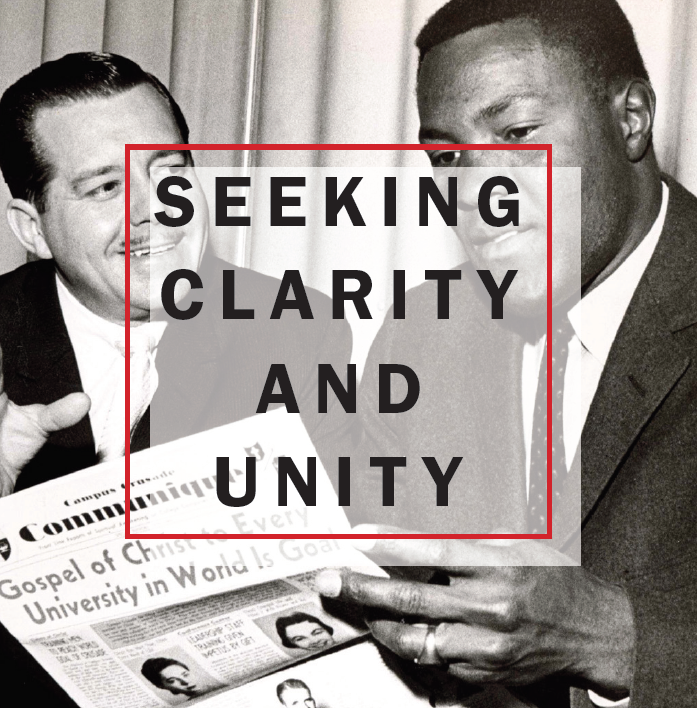 Cru’s Cultural Training functioned like indoctrination into the ideology of Critical Race Theory.

A report prepared by at least 350 members of Cru for review by top organization leadership details how racial divisions and hurt feelings were the result of Cru’s Social Justice emphasis. The most important Cru trainings stressed that ethnic identity trumped Christian identity. These approaches were rooted within a framework of Critical Race Theory, which pervaded the organization. (You can read the entire report on Critical Race Theory in Cru: Seeking Unity and Clarity.)

“The ideas of this victim-oppressor worldview are derived from Critical Race Theory (CRT)… This victim-oppressor worldview is embedded throughout Cru…This worldview was first introduced at Cru 15 and continued into Cru17 and Cru19. Whereas our national gatherings have traditionally been times of vision casting, mission reinforcement, inspiration, refreshment, encouragement, and rich biblical teaching, the emphasis shifted toward ‘thought leaders’ who taught on victim-oppressor themes. Many, but not all plenary sessions at Cru19 included aspects of this message—often with hostility directed toward the white majority staff. During a Cru19 seminar, one Cru national leader was recorded ‘shaming’ a fellow staff woman to tears because she benefited from white privilege.”

And just how did the shaming make Cru staff feel?

Not good. Many, some of the most committed to Christian missions, felt like leaving the organization they respected.

Here are a few excerpts from the report’s executive summary of the harmful trainings:

“The first day I felt like we were bashed for being part of the majority cul­ture….it really rocked me as [our staff conference] had always been a time of refreshment and encouragement”.

“The last two staff conferences have been extremely difficult. I have often thought of leaving staff because of the shift within Cru…I felt labeled…I was filled with pain and heartache.”

“At Cru15 love left the room and was replaced with judgment, unforgiveness, shame and mistrust of one another….the pure gospel of grace in Jesus Christ has eroded and a new gospel has come in built upon accusation, judgment, legalism and performance.”

That is about all one can say regarding how a culture of performance and suspicion replaced the Gospel within an organization dedicated to spreading the Gospel.

Of particular concern is Cru’s Cultural Training called the Lenses Institute. Lenses was an in-depth “cultural competency training for Cru staff. However, it functioned as an ideological re-education camp where Christian unity was replaced by the primacy of ethnic identity.

The Lenses Institute is also one of Cru’s most closely guarded secrets. According to the report, “Staff are required to disclose nothing about the teaching content outside of the training. Independent thinking is discouraged. Most authors and scholars recommended by Lenses are proponents of CRT.”

And as information on the trainings leak, it becomes abundantly clear, why there was a gag order on discussion of Lenses trainings.

At a Lenses training on September 23, 2020, a speaker was heard to say, “Identity in Christ cannot be elevated above our ethnic identity.”

The entirety of Appendix 3 is given to an analysis of Cru’s promotion of this type of serious error involving the Lenses Institute.

In total, Lenses was mentioned 75 times in the 174-page report on Critical Race Theory in Cru.

These types of multicultural or cultural sensitivity trainings purportedly from a biblical view are becoming popular within Christian organizations. In fact, as we reported multiculturalism and diversity trainings are now part of the offerings from Christian school accreditor the Association of Christian Schools International (ACSI).

These types of trainings purport to be from a Christian worldview; however, they function as ideological training. Lenses being a prime example of this brought into a Christian organization with a large footprint on America’s colleges and universities. ACSI brings the diversity trainings to K-12.

This is a growing problem that will bring with it growing divisions. This is something the Cru report established—the focus on privilege and oppression hurt the sharing of the Gospel with the lost world.

Proving just how corrosive racial identity trainings can be, Cru leadership—the very people who began and promoted the trainings—were on the receiving end of a protest letter from Cru’s Diversity and Social Justice staff, the report said.

500 Cru staff members signed a letter protesting the failure to hire “BIPOC (Black/Indigenous/People of Color)” for top leadership within Cru. The Cru staff alleged, “There is a history of the Church (local and parachurch) turning a blind eye and staying silent to systemic oppression and/or actively engaging in oppression and suppression of marginalized voices.”

At root of the Woke Cru protest is the view of every single position within an organization as something requiring secular identities as more important than the Christian identity. For example, this section from the Woke protest letter said, “There is encouragement and much to celebrate in Shannon Compere’s invitation and acceptance of the role, as she will be the first woman to lead the entire US Campus Ministry. However, full or complete celebration is left wanting because her appointment followed the promotion of two white men into the top leadership roles within Cru.”

The celebration of a woman’s promotion was muted because two white men were promoted. Consider that for a moment.

Does this letter read as something Christian or something Woke and secular?

Will the balkanization of Christians along these ethnic lines help the mission of Cru or harm it?

The report’s authors firmly believed it would harm the missionary work.

According to the report, “Cru’s stated Purpose is: helping to fulfill the Great Commission in the power of the Holy Spirit by winning people to faith in Jesus Christ, building them in their faith and sending them to win and build others, and helping the body of Christ to do evangelism and discipleship through a variety of creative ways. A victim-oppressor worldview is taking energy and focus away from this original calling.”

The report serves as a powerful call to return to the core Christian mission. Will Cru and other Christian organizations now tempted by the Woke Social Justice gospel repent and return to the Gospel?