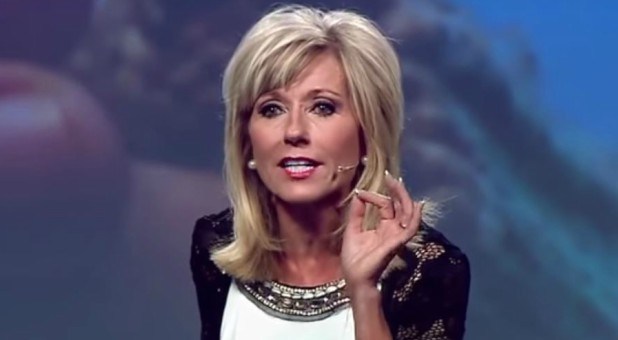 Do not be deceived: “Bad company corrupts good morals.” –I Corinthians 15:33 (CSB)

Beth Moore finally did it. She’s traveled very far down the Woke path. But a strong article highlighting her Woke hypocrisy involving the treatment of Nicholas Sandmann and the Covington Catholic pro-life students evoked something in Beth Moore. She apologized! Finally. A little over 18 months later.

“I reply in good will. Whether or not we share the same views on social justice, those I hold are because of the gospel of Christ & the Scriptures & not because of a departure from them. Where we agree, however, is on my poor & hasty judgment on the viral video. I am deeply sorry.

“What you will find in this Twitter world and the social media world in general is that saying I’m sorry will not be enough for most. But for those to whom it means something, it is sincere. I use a lot of words & some of them poorly. I’m a bit fiery but I’m striving to do better.”

The background. On January 18, 2019, Leftist activists confronted a group of Catholic pro-life students near the Lincoln Memorial. The students from Covington Catholic School were attending the annual pro-life march. Leftist media outlets framed the event as racial and blamed the students including Sandmann because they were easy targets—some wore Make America Great Again hats making them not only pro-life, but perhaps even a greater crime in the eyes of the Woke, they were pro-Trump.

The boys were smeared by Leftist press outlets like CNN and many Evangelical celebrities on Twitter—including Beth Moore.

And, good for Beth Moore. She apologized and said something else true: when we use lots of words, sometimes we do it poorly.

We are human. We all make mistakes.

However, Beth Moore’s words remain a serious problem for Christians. She is pushing the Woke Social Justice Heresy. Why?

Her Evangelical Elite friends. She is repeating what she hears because she is surrounded by the worst of the Evangelical Elite. Conferences and platforms shared with other Woke thinkers spreads this error.

Janet Mefferd, a Christian radio host, tweet of the Mary Beth Brown article drew Moore’s apology. However, Mefferd provided a warning to Christians that should be heeded.

She said, “Beth, your apology is great. We need to love people, but I reject social justice bc it’s unbiblical & bc it decimated 2 generations of my family’s mainline churches. I lived thru the carnage. SJ destroys Christianity. We must learn from the past & not let it destroy our churches.”

Yes. This is what is at stake. This is why the Dallas Statement on Social Justice and the Gospel was released in 2018.

It is why the Conservative Baptist Network was founded to save the Southern Baptist Convention from its Leftward Drift.

What are you doing to combat the Neo-Marxist attack on the Church and America? We are watching a Cultural Revolution unfold on our streets and in our pews. It is time for every Christian to do their duty. Get involved.

6 thoughts on “Can you believe what Beth Moore did this time?”