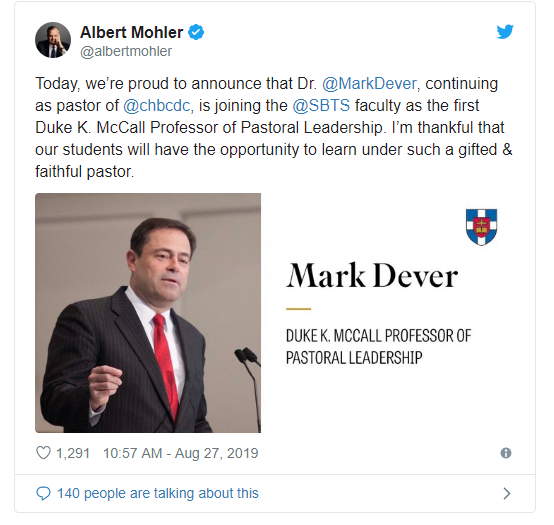 Mark Dever was just named a professor at Southern Baptist Theological Seminary. Al “Look at Who I Platform” Mohler made the announcement August 27. Dever is pastor at Capitol Hill Baptist Church in Washington, DC. At Capitol Hill Baptist Church’s Christians and Government Core Seminar (their name for Sunday School Adult Education), a church elder taught a course on Justice. Or, more specifically Social Justice. The series of classes began June 9 and concluded September 1. Our source provided the handout for the Week 10 class. It promoted Identity Politics and the Social Justice agenda. The class was taught by a church elder, according to our source who attended.

Today, we’re proud to announce that Dr. @MarkDever, continuing as pastor of @chbcdc, is joining the @SBTS faculty as the first Duke K. McCall Professor of Pastoral Leadership. I’m thankful that our students will have the opportunity to learn under such a gifted & faithful pastor. pic.twitter.com/MkA1kkwLO3

All the Core Seminars are available on the Capitol Hill Baptist Church website. Well, all but one. Unfortunately, the Christians and Government class is not available.

The problems with the class include promotion of the idea that there is a “Tension” between the Bible’s teaching on fair legal process and the many verses promoting God as a defender of the poor. The course points out that fair process is clearly and often praised in the Old Testament texts; however, it then proceeds to assert:

“Yet, justice is concerned with the ‘cause’ of the weak and disadvantaged,” citations bolstering this claim include Psalm 140:12 and Isaiah 1:17. “Psalm 72’s vision of the perfect king seems to go further. Verse 2: May he judge your people with righteousness and your poor with justice! Verse 4: May he defend the cause of the poor of the people, give deliverance to the children of the needy, and crush the oppressor! Verses 12-14: For he delivers the need when he calls, the poor and him who has no helper. He has pity on the weak and the needy, and saves the lives of the needy. From oppression and violence he redeems their life, and precious is their blood in his sight.”

They summarize their point, “Our goal: to make you more aware of the tension.”

That is a reckless point.

Fair process is necessary for justice. It requires fairness to rich and poor alike. There should be no respect of persons in judgment. The reason the Bible so often talks about defending the poor or widow is because most often in antiquity (and in many capitalist states) the poor are the most likely to suffer. However, modern history shows that the rich are often attacked in socialist and communist states. The point of Scripture is not to favor the poor or to imply a tension between the poor and rich, but to affirm that all peoples deserve justice before the law.

The Bible also provides eschatological hope. God, the Great Judge of the Universe, will at some point judge the injustices of today. The rich and poor will not escape justice.

Also, the class handout asserted: “Privilege is what one group of people enjoys over against another group or groups of people — often as a result of prior oppression. Its effects are often society wide. To benefit one need not have had an active hand in the oppression or discrimination.”

The idea of privilege is problematic. Some people have advantages. Some have disadvantages. God expects both to exist. After all, didn’t Jesus tell us the poor would always be with us? Encouraging guilt over blessings or anger over disadvantages is not the mission of the church.

And, “Our goal: not to offer one policy recommendation or another, but, again, to sensitize you to the reality of group dynamics and what it means for justice.”

Viewing justice through the lens of group identity is dangerous. Justice should be concerned about individual actions. We are culpable for our sins, and not the sins of our fathers, grandfathers or children and grandchildren. As it is written, “The soul who sins shall die.”

At the time, the elder taught, “Justice, after all, involves a reckoning. It’s not just a putting down of the oppressor; it’s a lifting up of the oppressed and downtrodden…The challenge of affirming merely a fair process is that it’s atomistic. It views people as isolated units. And it doesn’t account for generational and relational connectivity. It doesn’t account for the entrenched and cyclical nature of poverty passing from one generation to another.”

This is dangerous. Identity Politics has no place in the church. As Al Mohler said, “We have to see identity politics as disastrous for the culture and nothing less than devastating for the church of the Lord Jesus Christ.”

So, why does Al Mohler platform men who are busy promoting Identity Politics in our churches?