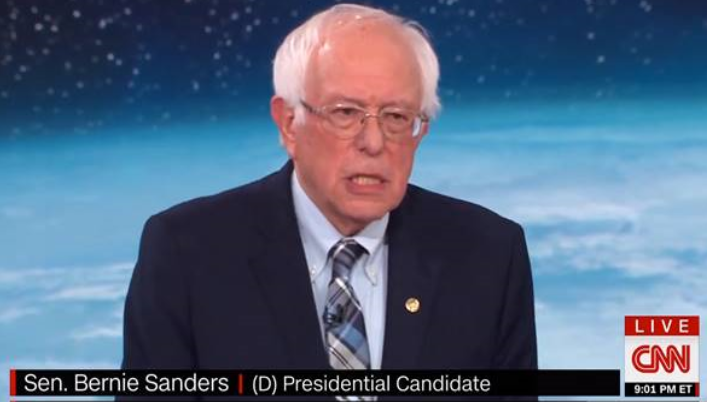 At a CNN Town Hall on the Climate, Senator Bernie Sanders revealed what Democrats really think about the poor. Abort them.

An audience member worried about population growth asked Sen. Sanders if he would address the issue. He said he would. His answer was abortion. Specifically, more abortions of poor, uneducated folks in Third World countries.

Martha Readyoff’s Question: “Human population growth has more than doubled in the past 50 years. The planet cannot sustain this growth. I realize this is a poisonous topic for politicians, but it’s crucial to face. Empowering women and educating everyone on the need to curb population growth seems a reasonable campaign to enact. Would you be courageous enough to discuss this issue and make it a key feature of a plan to address climate catastrophe?”

Sen. Bernie Sanders: “Well, Martha, the answer is yes. And the answer has everything to do with the fact that women in the United States of America have a right to control their own bodies and make reproductive decisions. And the Mexico City Agreement, which denies American aid to those organizations around the world that allow women to have abortions or even get involved in birth control to me is totally absurd. So I think especially in poor countries around the world where women do not necessarily want to have large numbers of babies and where they can have the opportunity through birth control to control the number of kids they have, it’s something I very, very strongly support.”
source video:

Democrat Voter: There are too many humans on earth.

Bernie: I agree. We need to fund abortions to poor, third world countries.

This is absolutely horrifying. pic.twitter.com/B2SBT053mz

So, there you have it. The answer to population growth is abortion.

However, it is the Democratic Party. It is why no Christian should ever vote for this Party. In fact, any Christian who votes for a Democratic candidate should be placed under church discipline.

There is a movement afoot in Big Evangelicalism to warm to the Democratic Party. You’ll see Big Eva encouraging Christians to be above partisanship. You’ll see them call you a stooge of the Republican Party if you are Pro-Life. However, don’t let that deter you from doing your duty and voting against every single Democrat and doing so at every chance you get.

It is also bad policy. There are not too many humans on the earth, and recent books appear to forecast a coming population decline. According to a review in the Council on Foreign Relation’s Foreign Affairs,

“Already, the signs of the coming bust are clear, at least according to the data that Bricker and Ibbitson marshal. Almost every country in Europe now has a fertility rate below the 2.1 births per woman that is needed to maintain a static population. The UN notes that in some European countries, the birthrate has increased in the past decade. But that has merely pushed the overall European birthrate up from 1.5 to 1.6, which means that the population of Europe will still grow older in the coming decades and contract as new births fail to compensate for deaths. That trend is well under way in Japan, whose population has already crested, and in Russia, where the same trends, plus high mortality rates for men, have led to a decline in the population.”

So, Democrats are not only promoting something pure evil, but promoting a policy that will be bad for the global economy and the future of humanity.

One thought on “Abortion, Population Control & Why Christians must never vote Democrat”