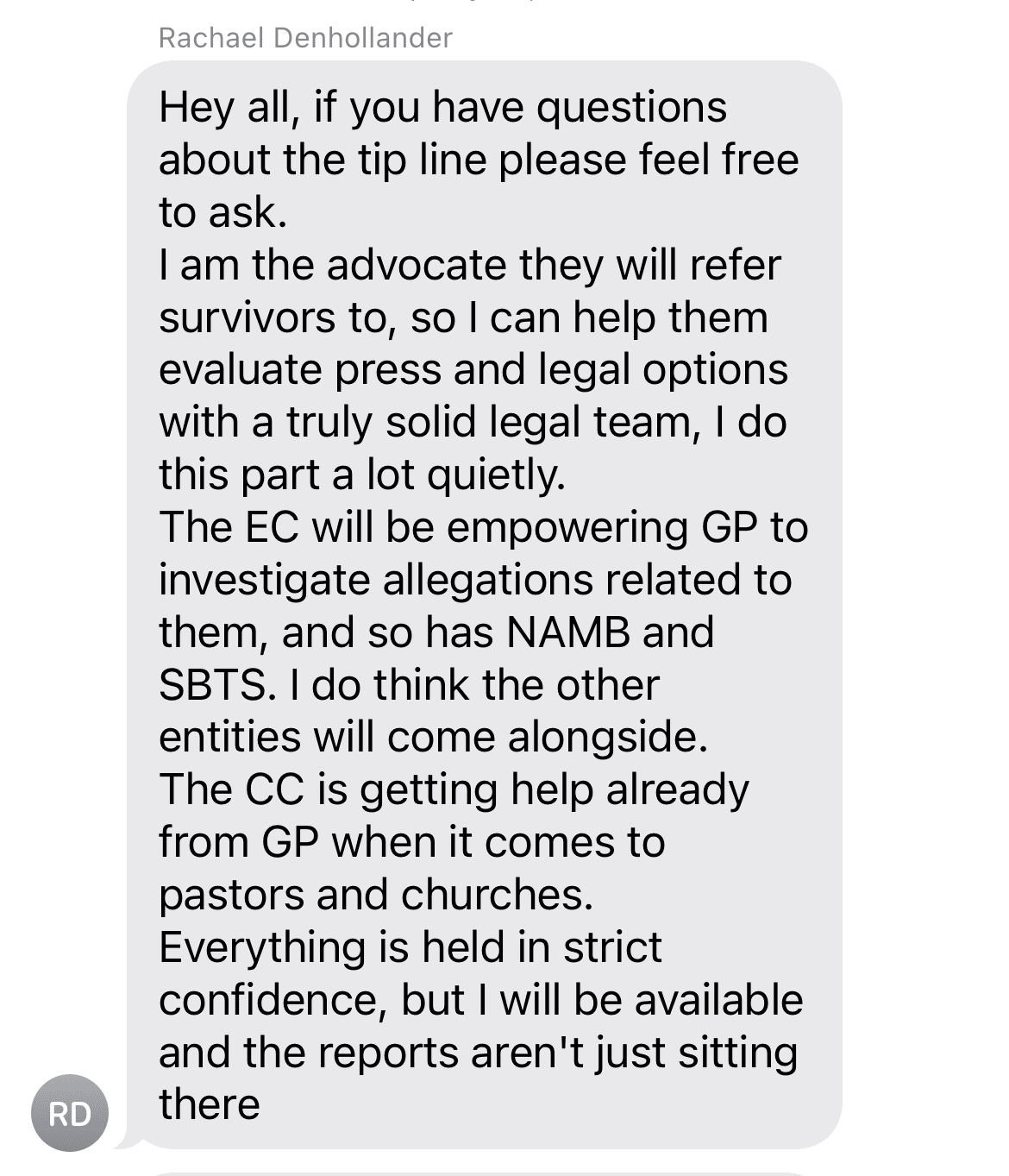 Note the treatment of Christa Brown, Hannah-Kate Williams, and even Tom and Jennifer Buck & Will McRaney to see how SBC Elites treat people who threaten their money & power.

The latest example of SBC perfidy came in the response of SBC Elites and Denhollander fanboys who attacked Christa Brown for pointing out what everyone can see—Rachael Denhollander’s relationship with the SBC’s Abuse Hotline created a myriad of real and potential conflicts of interest. Naturally, the response from the SBC was to dismiss the claims and set the Woke mob on Brown. Her response is chilling.

Which women and what time? When it is politically convenient for the SBC Elite Cabal including SBC President Bart Barber—who seized power on the lie that they would do something about sex abuse in the SBC.

So, far they haven’t done anything. As one former SBC Executive Committee member said, So the leftists got control of the SBC Executive Committee and Credentials Committee over a year ago. Supposedly over sex abuse. Hundreds if not thousands of churches were covering it up, don’t you know. So we were told, anyway. And yet, more than a year later, the so-called ‘reformers’ haven’t found a single church to disfellowship for violating the anti-sex abuse rules. Not even one.”

It would also be worth noting here that these same SBC Elites did not care one bit about how certain SBC members attempted to blackmail Tom and Jennifer Buck. In fact, Jennifer Buck said, “I feel I’ve been used as a weapon against my husband and further abused by my personal information being leaked because others determined smearing him was of more importance than protecting me or the witness of our great testimony.”

Like Tom and Jennifer Buck or don’t like them; however, you must admit that what was done to them is disgusting politics and an immoral abuse of a sex abuse victim—Jennifer Buck.

And yet, no the SBC Annual Meeting and President Ed Litton silenced Jennifer Buck’s pleas for help on the Convention floor. There would be no SBC investigation and no punishment of anyone involved. Why? Because the Bucks aren’t one of the select people the SBC Elites want to believe or protect.

Pravda releases its defense of the SBC

The Sex Abuse Reform Implementation Task Force released a statement attempting to diffuse the controversy involving Rachael Denhollander’s conflict of interest between the SBC and sex abuse victims; however, the statement was a total joke that contained nonsensical denials that in fact likely further prove the conflict exists.

For example, the task force statement said, “Rachael Denhollander serves as an advisor due to her expertise in crisis response, trauma, abuse dynamics, and sexual abuse reforms. She does not serve as counsel for the ARITF or the SBC.”

As one legal expert observed, “This lawyer is just my advisor, not my counsel,” and then linking to this law dictionary definition of counsel, which says counsel is “a term given to a lawyer, attorney or a counsellor. To counsel someone means to advise them.”

What is Denhollander providing information to abuse victims regarding? How to sue the SBC? Denhollander admitted this in now public text messages.

Rachael Denhollander said in the text message (see at top of story), “I am the advocate they will refer survivors to, so I can help them evaluate press and legal options with a truly solid legal team, I do this part a lot quietly.”

This is a very important point—it sounds like Denhollander is offering some type of—what is it called—legal guidance.

In an attempt to make this all disappear, the Task Force statement said Denhollander has not been paid for her work—again legal experts say that does not really matter given the type of advice Denhollander was allegedly providing to multiple parties.

Christa Brown made an important observation—the entire situation is not really about Denhollander’s lack of ethics but rather how the SBC works.

Brown said, “I have been publicly & wrongly accused of “blatant mistruth” in this column. While I feel this as a cruel gut-punch, at root I view it as being more about how remiss & untransparent the SBC has been than it is about an upset survivor who doesn’t really get the Ethics 101 issue.”

And then comes the really important point. Brown said, “But I feel confident there are SBC leaders & attorneys who DO get it – they understand the ethics issue – and they were content the way things were because it helped them hold power & control, and because they’ve ALWAYS gotten away with a lack of transparency.”

This is how the SBC conducts business. If you doubt it—read about how Kevin Ezell and the North American Mission Board (NAMB) and its trustees have treated Will McRaney. It isn’t a sex abuse case. Yet, that case shows the pettiness of SBC Elites and how far they will go to destroy someone they decide is an enemy. They will lie to federal courts too in an attempt to preserve their power.

And if you doubt that why? They are doing it to Christa Brown now just like they did to Hannah-Kate Williams when she was no longer useful to them. They were happy to let their Woke friends attempt to destroy Tom and Jennifer Buck too. Nobody is safe if you threaten their money and power.

Who will be next? You? Your ministry? Your friend?

The SBC is Byzantine.