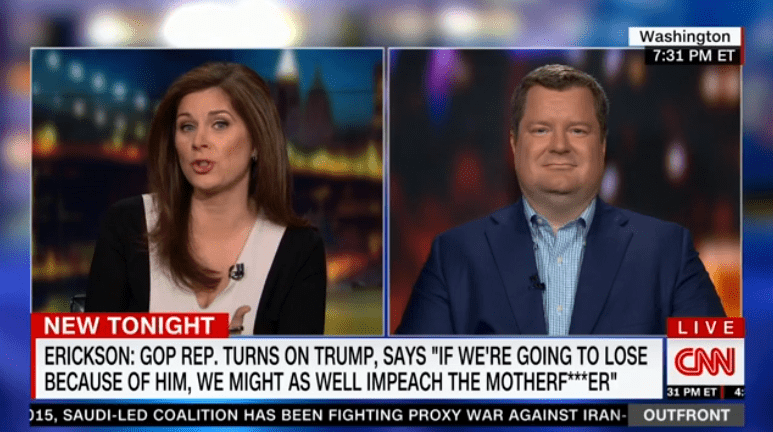 Erick Erickson calls conservatives Trump Humpers and labels a leftist journalist a ‘bitch.’ Why does anyone take this foul-mouthed Russell Moore fanboy seriously?

Erick Erickson, the self-acclaimed next Rush Limbaugh, was on the attack this morning going after conservative critics of the Ethics and Religious Liberty Commission (ERLC). Erickson touts his Christian faith; however, on more than one occasion Erickson’s mouth has shown an ugly side. Erickson regularly accuses conservative Christians of being “Trump Humpers” and on one occasion called leftist journalist Soledad O’Brien a “bitch.”

In a tweet exchange O’Brien called Erickson “clueless and a bigot.” Erickson responded in something questionable for a Christian gentleman; Erickson said of O’Brien, “Dumb and a bitch.  Interesting combination. Also, why she can’t keep a job on TV.”

It is the perfect combination of misogyny, nastiness, and arrogance. In other words, a classic Erick Erickson tweet.

After all, he is the clown who five months after the death of Rush was proclaiming his taking the top spot in Atlanta radio ranking “As Joe Biden would say, it’s a BFD,” he told Secrets. Though the latest edition of that story omits the “BFD,” quote. I wonder why? Perhaps someone realized such a quote doesn’t fit in with Erickson’s LARPing as a Christian radio host?

And this foul-mouthed Christian talker is a Russell Moore fanboy. He regularly defended the lifelong Democrat while Moore was destroying the Ethics and Religious Liberty Commission (ERLC). Erickson was featured at ERLC events while hating on Donald Trump.

And today Erickson was once again shamelessly attacking conservatives in the Southern Baptist Convention. For those who don’t know, the ERLC hired a new president to lead the organization after it was run into the ground by lifelong Democrat Russell Moore. The new head is detested by abortion foes who want to abolish abortion in the US.

Of course, Erickson sides with the leftists in charge of the SBC.

It is unreal that anyone takes him seriously as a pundit or Christian.