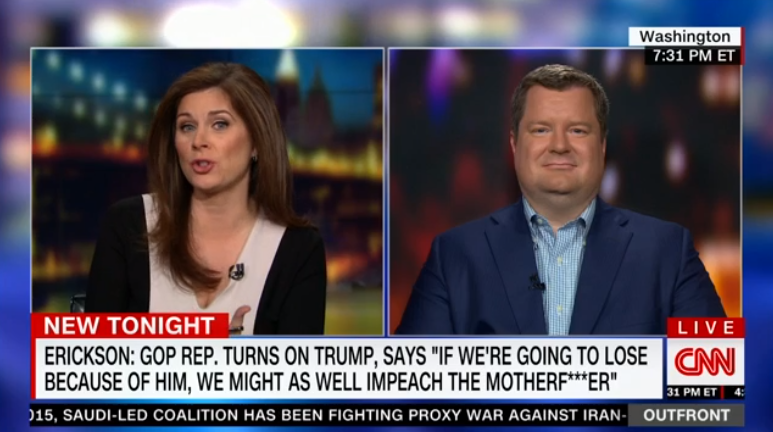 Eric Erickson is upset when conservatives ‘Own the Libs’ but uses harsh, disgusting language against conservative Christians like the Conservative Baptist Network. He is not the next Rush Limbaugh.

Erick Erickson declares he is going to be next Rush Limbaugh. The talk radio host and sometimes theologian bragged to the press about Limbaugh being a mentor and how Erickson’s show is surging.

Erickson’s show “surged to No. 1 in Atlanta during the three-hour period. ‘As Joe Biden would say, it’s a BFD,’ he bragged to the press. Also, according to the report, “If somehow people really did start tuning into me, I think it means that there really is a market for more than just red meat.”

However, Erickson is way too progressive to be the next Rush Limbaugh. In fact, just yesterday he once again attacked conservative Southern Baptists.

Erickson tweeted, “It seems like a very white group within the SBC is claiming anyone who talks at all about racial reconciliation is woke and they’re willing to defame others and bully others into silence on the issue.  Sin festers.”

The only sin here is Erickson’s. He relentlessly sided with lifelong Democrat Russell Moore when Moore was involved in political disputes with conservatives.

For example, Erickson regularly used disgusting rhetoric against conservative Southern Baptists. For example, in this deleted but indexed tweet Erickson attacked the Conservative Baptist Network, “This whole ‘we’re purer than you’ effort to remake the Southern Baptist Convention in Trump’s image is really nuts. Trying to ruin good conservative pastors because they won’t hump Trump’s leg reeks of fire and brimstone.”

Conservative Baptist Network leader Rod Martin responded to that comment about conservative Southern Baptists last year. He said, “Well that is disgusting. Shame on that person. That is gross. I would expect that from pagans. I don’t want to make anything into the image of Donald Trump. We are the Church of Jesus Christ. Our job shouldn’t be politicizing everything in the way that our Leftwing friends choose to do.”

Erickson regularly deletes his tweets. And he has good reason to do so. Here is another example showing he does not comprehend the danger that Christians and Americans face at the hands of radical Leftists.

This is the problem with too many on the Right. They confuse that there are in fact two battles raging. There is a spiritual battle where Christians spread the Gospel. There is also a political battle where different means and different ends are pursued. Erickson regularly uses crude, abusive talk against conservatives; however, he is upset when that type of rhetorical flare is used against Leftists.

What does that tell you?

As we’ve warned, you that is the test for if someone is a conservative or Leftist. In our piece: How to detect a Leftist in Church and State, Pas d’Ennemi à gauche (No enemies to the Left) is the test. As James Burnham explained in his 1960s classic Suicide of the West, Leftists prefer their attacks to the right.

Take a look at who Erick Erickson attacks.

He is no Rush Limbaugh.

In fact, he clearly sides with lifelong Democrats like Russell Moore and useless Republicans like Mitt Romney over conservative Southern Baptists.

Want to know what is happening in the SBC? Consider watching the film SBC Elites don’t want you to see.