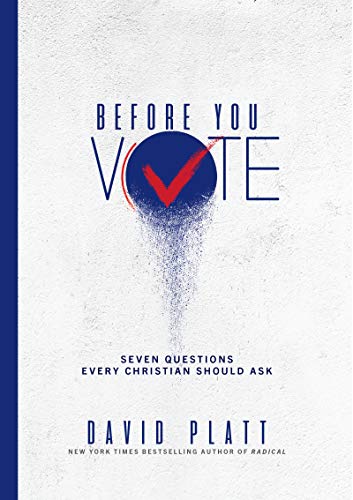 David Platt billed McLean Bible Church for some marketing expenses along with printing for several thousand books he tried to giveaway during the 2020 election.

David Platt’s problematic book on Christian politics that dropped just before the November 2020 Presidential election was given out free to members of McLean Bible Church. Thousands of copies of the book Before You Vote were given out before and after services despite Elders recommendation against distribution. Now, the Capstone Report can reveal that Platt sent the church a bill for the books and for some small marketing expenses.

According to a McLean Bible Church staff member who was aware of the bills, “There was a printing bill from the publisher for (those books) and a bill related to the marketing of the book.”

Staff were afraid and stopped any of the book’s invoices from being approved, but the invoices were later approved by certain Elders.

This occurred despite serious problems that McLean Bible Church elders had about Platt’s book and the leftist teachings it contained.

Back in 2020, the Capstone Report detailed issues with Before You Vote: 7 Questions Every Christian Should Ask that included what amounted to justifying a Christian voting for Joe Biden.

The Capstone Report learned that there was serious pushback against Platt’s book among the elders who served on the board in 2020. David Platt allowed the MBC Elders to read the final draft copy before printing and to not surprise them with some of the controversial conclusions in the book.

In fact the former church staff member who spoke to the Capstone Report, said Platt “resented” the feedback he received.

Platt’s book was highly divisive in how it justified voting for pro-abortion candidates. Platt’s book was mentioned in an extensive letter to Church leaders from ministry leaders and former elders.

According to that 17-page letter, “The elders should carefully review and approve positions and written statements before they are published. For example, David Platt’s book on voting necessarily represented MBC with a position of dubious biblical fidelity. When MBC senior leadership publishes a book to the world, they are representing MBC, its congregation, and the MBC elders. The same applies for statements written on social media or public speaking.  Indiscretions in this area have severely damaged MBC’s long-standing reputation locally, as well as nationally.”

David Platt’s actions caused the church to shrink in Sunday average attendance from 12,000 to approximately 3,000 today. Numerous members have asked the church to exclude their names from membership. Cornerstone Church down the street in Leesburg, Virginia has taken on many of the MBC faithful who couldn’t accept the liberal social gospel being preached by Platt.

The next section was taught by David Platt in the form of answering a question that David has gotten from many people in the church. “How can a member of MBC support a Democratic party candidate who supports abortion?” He started off with an assertion that the issue is complicated and a proclamation that he is writing a book on the subject. Then he said that there are always “competing injustices” and that Christians should weigh their options at the ballot box using two factors – Biblical clarity and practical consequences.  He did this by putting a few examples in a two-by-two diagram. His essential argument was one of moral equivalencies. For example, he drew a moral equivalency between 1) the good of the government protecting the life of the unborn, and 2) the “good” of the government taking money at the point of a gun from someone who earned it, filtering it through a government bureaucracy, and then giving what is left over to someone who did not earn it, as an “entitlement”. What he called “helping the poor”.

The second thing that we have described above is as far from the Biblical concepts of either charity or justice as any idea could possibly be. We believe this is a consequence of McLean Bible Church losing our focus on the gospel and wading into secular, political ideologies of “social justice” that are profoundly different from the Biblical concept of justice.

Before You Vote was published by Radical, Inc.

MBC has cut many of its long-time missionaries based on its financial situation and to send money to Platt’s Radical organization.

It is harder to find in the current church financial statements the money given to Radical, the church staff member said.

There are other financial questions that church staff raised about McLean Bible Church’s finances. For example, a former staff member knows that the church has paid former pastor Lon Solomon several times the agreed amount of retirement benefits due each year.

Solomon signed an NDA (Non-Disclosure Agreement) that contained a non-Disparagement clause linking Solomon’s retirement to not making any criticism of Platt or other church leaders. The severance agreement was approved by the Elders and the agreement contained money, payment for some medical services for Solomon’s disabled daughter, and payments on a life insurance policy. These amounts were specified by the elder-approved agreement.

However, with larger amounts earmarked as going to Solomon, the church staff member was unable to find a reason. Church Elders are the only one’s privy to the reasons for the increase. This discrepancy is more about the church than Solomon.

There may be a very good reason to do this. A former church insider said at one point, the church considered purchasing an annuity to cover the defined retirement benefits. However, when that was considered, the church declined to purchase it. Has that changed? Is there another reason for the larger outlays?

The church staff member was unsure—and it led back to the earlier statement about how the church has now made it harder to find out how much money the church spends on top salaries or that it sends to Radical.

In another move to make it harder to figure out how what is paid and to whom, the church lumped salaries into a different category in last year’s budget—and one church member said it was no longer as easy to determine a rough idea of what the church was paying key employees.

If there is nothing to hide, why are so many megachurches producing financial statements that are so confusing?