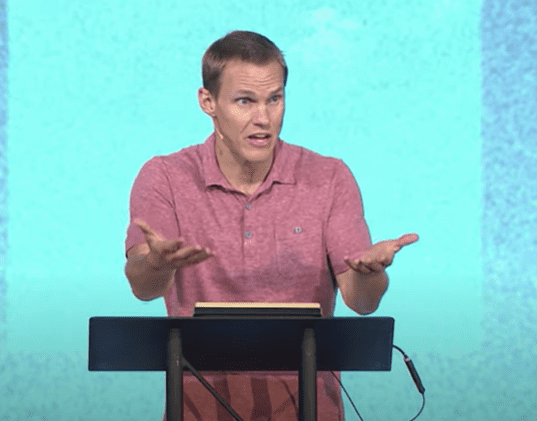 Division at McLean Bible Church over pastoral accountability began long before recent business meeting fireworks. For at least a year, church leaders and even some elders urged David Platt to stop his reckless activities. Key church leaders sent the following 17-page letter highlighting concerns. Of particular interest is the section dealing with the promotion of young leaders whose conduct worried longtime MBC members.

“We believe the secular philosophy of ‘affirmative action’ may have influenced recent decisions regarding the composition of the elder board and pastoral staff, in pursuit of the secular goal of ‘diversity,’ in meaningless, superficial characteristics like skin shade, rather than strictly adhering to Biblical qualifications,” the five men wrote.

This letter to the Elders of McLean Bible Church was sent February 3, 2021, and outlined in 17 pages many of the concerns about the Leftward Drift of MBC and its issues involving Elders, oversight, transparency, issues with staff oversight, and its move toward promotion of Critical Race Theory and other dangerously divisive ideologies. The only redaction was to the name of the five signers (at the time one was an elder and the other four were leading or involved with MBC ministries.)

To the Elders of McLean Bible Church,

Greetings in the name of our Lord Jesus Christ.  We hope that all is well with you and your families, as we continue to navigate these unprecedented times.

We thank you for your service and leadership at McLean Bible Church. Further, we thank you for giving us the opportunity to share our concerns with you in writing, and through virtual and in-person meetings with Elders Larry and Tom, and with Pastors David and Mike.

As you know, several months ago we provided the elder board with a paper discussing our grave concerns regarding “The Gospel, the Church, Justice and Racism” (GCJR) class. We write again to share our deeper, underlying concerns on the following key issues: elder oversight, lack of transparency, biblical preaching and teaching, staffing, and outside influences. We believe that these issues are at the root of MBC’s current predicament and regrettably believe that they call into question the fidelity of MBC to Scripture.

In approaching these issues, we are inspired by the Apostle Paul’s example in Galatians 2, where it was necessary to rebuke Peter.  We are concerned that secular, worldly ideologies have improperly influenced the teaching of Scripture at MBC, confusing and dividing the church body, ultimately undermining the preaching of the Gospel at MBC.  However, we believe that God can sovereignly use serious problems to very beneficial ends, as seen in Paul’s rebuke of Peter and Peter’s repentance.  Please understand that this comparison to the Apostle Peter is intended to highlight that even the greatest church leaders are nevertheless fallible.

Furthermore, we wish to assure you that we raise these concerns out of deep affection and concern for MBC.  We have carefully examined our motives and pursued humility before the Lord.  We have engaged in prayerful consideration, and have sought wise counsel.  Thus, we offer this paper in the hopes of restoring the purity of MBC, above all other concerns.

Accordingly, we request a meeting with the full elder board to make a presentation discussing the concerns outlined in this paper, to answer any questions the elders may have for us, and lastly, to provide an opportunity for the elders to address the issues that we have raised in this paper below.

Impact of staff hiring and training, and partnerships with outside organizations……………………. 15

THE ELDER BOARD AND THE DIRECTION OF MBC

Doctrine of the Sufficiency of Scripture (sola scriptura)

IMPACT OF STAFF HIRING AND TRAINING, AND PARTNERSHIPS WITH OUTSIDE ORGANIZATIONS

MBC management of partnerships with outside organizations

The foregoing is not exhaustive, but sufficient to demonstrate a glaring pattern of issues that require immediate elder oversight, and, sadly, have led many faithful, discerning members to depart MBC. Church staff have reported approximately 3,000 members and non-members have departed MBC for a more Biblically based church this past year. It appears, church leadership is not concerned about large portions of the congregation leaving.

Charles Spurgeon said in his 1888 sermon “Hold Fast the Faith,”

“Here is the day for the man, where is the man for the day?”

This is our call to the elder board, given our belief that MBC, once alive and powerful, has courted the world, tolerated sin and incorporated worldly ideologies, and, as a result, has become, like Sampson, weak, blind and unaware that the Lord has departed.

We fear that, like the church at Sardis, despite MBC’s prominence and outward activity, the Lord may declare her “deeds not complete in the sight of God” (Rev. 3:2) for compromising her all important, inner orthodoxy.

As Erwin Lutzer notes in his recent work, “We Will Not Be Silenced,”

What concerned Jesus about this church that its leaders had failed to notice? The answer isn’t explicitly stated in the letter, but it’s not too difficult for us to figure out where the deception lay. This church that had a reputation of being alive was now dead because the people had submitted to the surrounding culture… Thankfully, not everyone in the church succumbed to the temptations of the sensual culture. Jesus went on to say, “Yet you have still a few names in Sardis, people who have not soiled their garments, and they will walk with me in white, for they are worthy.”

Christ called the leaders at Sardis to “Wake up, and strengthen what remains and is about to die.”

We look forward, as part of that process, to an opportunity to discuss further these issues with the full elder board. Thank you, in advance, for your prayerful consideration.