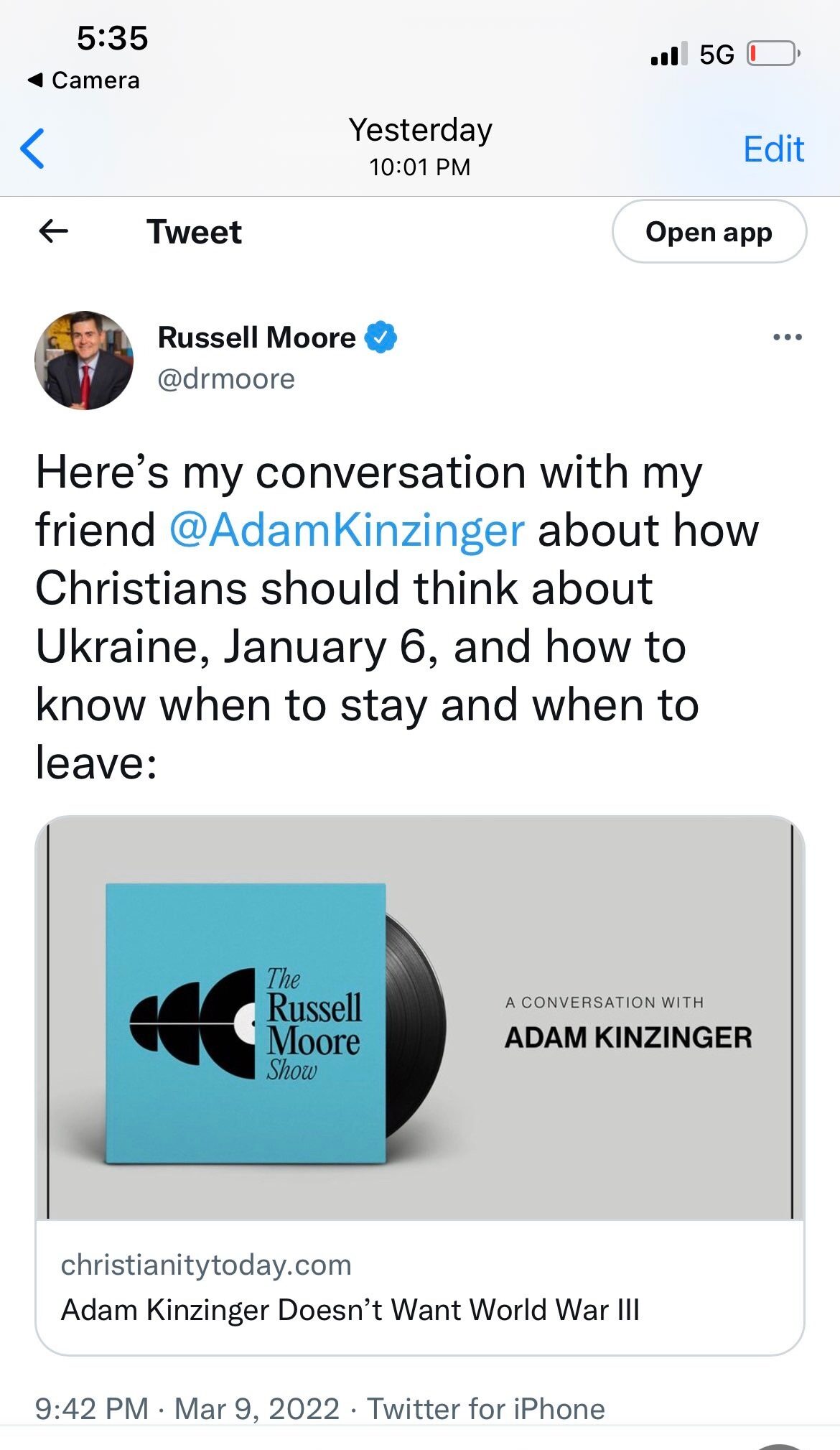 Adam Kinzinger is not only anti-Trump but voted for a radical pro-abortion bill and supported federal protections for same-sex marriage, yet Big Evangelical Elites like Russell Moore, David French, and Daniel Darling promoted the anti-Trump congressman.

Adam Kinzinger was one of only three House Republicans to vote for the Ensuring Women’s Right to Reproductive Freedom Act. Kinzinger joined Democrats to pass the pro-abortion legislation—legislation that would radically expand abortion across America beyond even Roe v. Wade. Kinzinger also voted for same-sex marriage legalization advanced by Democrats. So, why have so many Big Eva celebrities promoted the anti-Trump congressman over the last couple of years?

And of course, not to be left out is Daniel Darling. Darling, who allowed Big Eva to spread lies about the National Religious Broadcasters’ Association (NRB), is a big fan of Kinzinger. Darling tweeted that he was “Grateful for the honest leadership of my friend Rep. Kinzinger.”

Darling wants to make sure you know he is friends with Adam Kinzinger and says just that in another tweet.

And even in a third tweet, Darling labels Kinzinger a friend.

In case you didn’t know, Darling considers Kinzinger a friend.

One almost feels sorry for Darling since he is trying so hard to convince you that he has a friend.

It is like he needs a hug from Stuart Smalley or something.

Given Kinzinger’s support for a radical Democrat abortion bill and same-sex marriage, why is Big Eva so friendly with Kinzinger?

One reason could be that Kinzinger bashes conservative churches—almost as often as Russell Moore.

In a June press release, Kinzinger said that some church worship Donald Trump. Kinzinger offered his view of how Christians should engage in politics. “If I look in the, what I believe in the New Testament, in the words of Jesus, it was all about not being involved in government,” he said.

Kinzinger said, “We need pastors. We need priests. We need leaders who are going to stand up in front of the pulpit and say, we welcome Democrats in this audience as well, and we’re not going to sit here and worship Donald Trump, because he’s a very flawed man. In fact, all men are flawed,” Kinzinger said in the video.

Another reason Big Eva might promote Kinzinger is how Kinzinger speaks the same language—as a lifelong Christian.

Christianity Today breathlessly reported that Kinzinger voted to impeach President Donald Trump because, according to CT, the congressman’s “faith led him to the decision.”

CT informs us that Kinzinger has attended church for “all his life.” Kinzinger started as a Baptist and now attends Village Christian Church in Minooka, Illinois, according to CT’s hagiography.

Kinzinger isn’t shy about sharing his thoughts about the church. In fact, the anti-Trump congressman makes his views clear on social media and in press releases.

Of course, this makes us wonder what Kinzinger’s church (Village Christian Church) thinks about abortion and same-sex marriage. Is it pro-life? Pro-traditional marriage?

Is Adam Kinzinger the next Francis Collins?

Remember that The Federal Government Used Evangelical Leaders To Spread Covid Propaganda To Churches, according to the Daily Wire.

Given how Big Eva recently platformed Francis Collins, one wonders if there was a similar effort with Adam Kinzinger.

William Wolfe raised this very point. He said, “It’s like Francis Collins 2.0 Evangelical elites, so smitten with Kinzinger’s participation in the kangaroo court of the J6 Committee, heaping praise on a lawmaker who just voted for a bill that completely disrespects and destroys God’s definition of marriage.”

With Francis Collins, the goal was to spread Covid propaganda.

What is the point of promoting Kinzinger?

Given some of Kinzinger’s writings, it appears that the goal is the same Russell Moore play as before—to stop Christians from voting Republican.