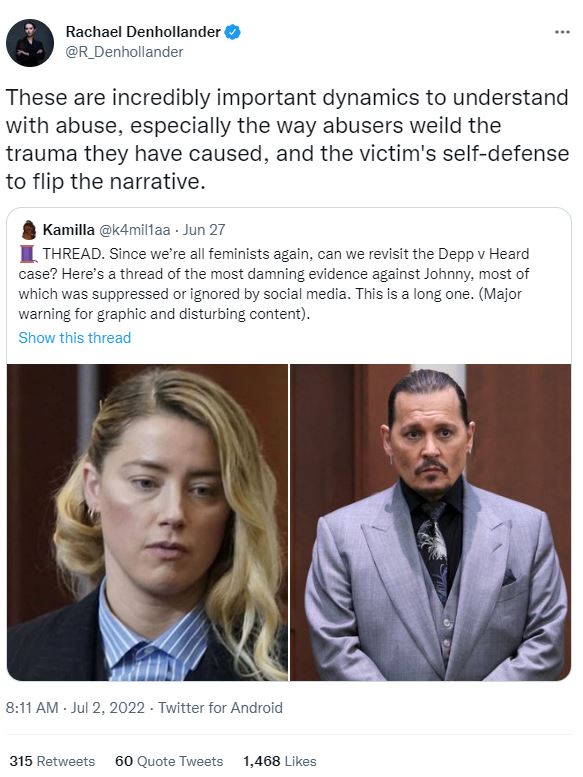 Rachael Denhollander says jurors get things wrong because of cultural attitudes. Denhollander will participate in new mandatory class at SEBTS.

Rachael Denhollander declared herself Team Amber endorsing the view that Amber Heard was done wrong by both Johnny Depp and the jury. Denhollander made her declaration in a social media post outlining how victims can be manipulated into hitting first. She said this in a long thread that re-tweets a “feminist” discussion of the evidence against Johnny Depp.

Denhollander explains, “These are incredibly important dynamics to understand with abuse, especially the way abusers wield the trauma they have caused, and the victim’s self-defense to flip the narrative.”

Denhollander is going to explain to society why Heard wasn’t crazy.

In other words, trust the experts. Let’s blame the patriarchy instead of the woman–just ignore all the evidence.

What are some of those things that Denhollander thinks society should know? Well, even if a woman “hits first,” it was that bad guy who made her do it.

Denhollander argues, “As soon as she hits first or grabs an object to defend herself, he calls the police. She gets a report filed on her. Now it’s much harder to get protection from the legal system – even though it was already extremely hard. He gets the support and empathy. She gets labeled ‘crazy.’”

She may have pooped the bed—according to testimony in the case.

According to media reports, “Depp also described finding feces on the bed they shared after one fight in April 2016. He previously accused Heard, or one of her friends, of pooping in their bed as a ‘prank’ after a fight following the actress’ 30th birthday party.”

Heard blamed it on the Yorkshire Terrier’s bowel problems.

You don’t have to be an expert to note the size discrepancy between humans and dogs. But, oh well, pointing that out is probably abuse or defending the patriarchy or something.

However, the assumption from Denhollander and most feminists is that the man is always the abuser. Thus, Heard’s actions were precipitated by Depp’s masterly manipulation.

Denhollander says, “So people side with him. It requires nothing of them, and often they receive a level of emotional or relational gratification from this, because he’s still manipulating the community, and they’ve become part of it…Jurors have none of this training, and are simply part of our society. All those rape and abuse myths the culture responds with, jurors are part of that culture too. And they often have access to less information because of evidentiary rules.”

Yes, jurors can get it wrong. But much of what Denhollander details here can just as easily be manipulated by any party to a dysfunctional relationship. Women sin too. Women manipulate too.

Making excuses for when a woman “hits first” seems an interesting approach for an expert the SBC is platforming as a foremost expert on abuse. In fact, Denhollander will feature in a new mandatory course on sexual abuse and prevention at the Southeastern Baptist Theological Seminary (SEBTS). No doubt these feminist views are the latest Analytical Tools to be promoted at SEBTS.

No doubt Denhollander will further the SBC’s goal to “tear down all hierarchy.”