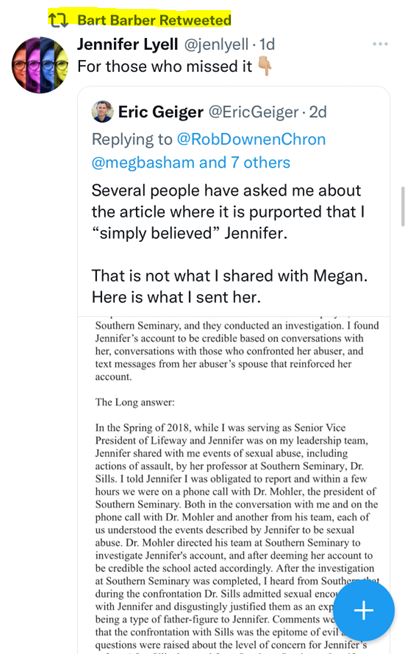 Eric Geiger claimed on social media that Mary Sills threatened Jennifer Lyell and that Mrs. Sills knew of the relationship between Lyell and David Sills.

You’ll note this part contains the public accusation against Mrs. Sills, “After Sills departed from Southern Seminary, Jennifer showed me correspondence from Sills’ wife that reinforced all she had shared with me, including text messages with a threatening tone and indications she had known of the sexual encounters.”

And of course, making sure to join the virtue signaling was Bart Barber.

Megan Basham said, “Her name is Mary. She denies @EricGeiger’s claim that she was complicit in abuse against Jennifer Lyell.” Also, “because I could not confirm anything related to allegation against Mary Sills, I saw no reason to bring her name into it publicly. Geiger did when he posted email. Claim gained further public traction by @bartbarber’s reposting.”

Which prompts us to ask, before making this allegation public (or even sharing it in an email) did Eric Geiger confront Mary Sills?

After all, Mary Sills is not a public figure and yet now permanently has her reputation stained by Eric Geiger’s reckless retweet of that email.

Why did Geiger do it?

Then again in today’s SBC, why would either let biblical responsibilities get in the way of a good pat on the back from fellow leftists on Twitter?

Oh, and making sure not to be left out of the good time spreading an allegation against Mrs. Sills, Todd Benkert retweeted it. Yes, Todd Benkert, the guy who was caught on tape lying to Tom Buck about Benkert’s knowledge of a blackmail attempt directed against Tom Buck.

These men—Geiger, Barber, and Benkert—all claim to care about women. Yet, their conduct in this saga shows they only care about some women.

Unfortunately, Mary Sills appears to be someone very few people considered in this entire mess.

This is today’s SBC. This is why Bart Barber was the choice of the Woke wing of the Southern Baptist Convention.