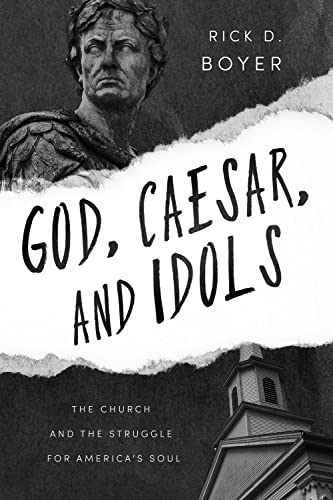 Attorney Rick Boyer’s new book tries to answer the question: What is going wrong in the church and in America?

God, Caesar, and Idols: The Church and the Struggle for America’s Soul published by Ambassador International, pp. 324, available in paperback and Kindle.

America looks to be spiritually ill, according to Rick Boyer, the attorney helping members of McLean Bible Church defend the church against David Platt’s autocratic overreach. Making this situation worse, the church seems impotent. Boyer wonders, “Why do we live in a land where the majority of the population identifies as Christian yet there is a wholesale ignorance of Christ’s teachings?” (p. 7).

Boyer went to Scripture with this and other questions. The result is God, Caesar, and Idols, a book examining recent trends and what the Bible has to say about it.

Boyer considers elections like the 2016 Presidential election as a sign of sickness. Yet, there are other signs that local elections also provide. One example is Lynchburg Republican John Kinchen losing a race for schoolboard by 73 votes over the issue of school support for transgender issues.

Boyer writes, “Social media exploded with condemnation, not of the decision to spend tax dollars to advocate for immoral lifestyles but of Kinchen for ‘targeting’ the student. Kinchen signs disappeared from yards of folks I knew to be professing evangelical Christians. Voters began to tell him he needed to ‘go to church and repent’ (p. 11).

Boyer explains, “Kinchen’s race was lost not because of ‘the radical left,’ George Soros, ‘the liberal media,’ Barack Obama, Hillary Clinton, or any of the usual suspects. It was lost because professing Christians could not deal with a candidate who was criticized for taking a stand that was the historical position of mainstream Christianity from biblical times until about the past decade. Whether through fear, embarrassment, cultural assimilation, or simple biblical ignorance, a simple, thoughtful defense of a basic biblical truth, devoid of any personal attack whatsoever, was too much for these folks to stomach. And the result occurred in the very shadow of Liberty University, in a town called ‘the city of churches,’ in ‘the buckle of the Bible Belt’” (pp. 11-12).

Boyer was stunned by how Christians voted in a Lynchburg of all places—not on biblical principles but along with the culture. This sent him into prayer and reflection. It was through this it hit him that he was fighting in one theater but neglecting another—perhaps far more decisive theater.

Boyer writes, “Finally realizing that I myself was not taking the time I needed to faithfully instill in my own five kids the biblical principles I had tried to defend in political conflict” (p. 12). Thus, Boyer delves into Scripture to seek answers to both the church and America’s problems and attempts to provide the answers in 324 pages deep in Scripture and analysis.

The Watering down of the Gospel

“False prophets are only effective if people don’t readily perceive their message as false. It has to have enough truth to make us comfortable. And cloaking the message in words like ‘gospel,’ as Greear does, is as comforting as it gets,” (p. 42).

Boyer sees J.D. Greear’s use of preferred pronouns as a sign that Christians have watered down the Gospel (p. 39). According to Boyer, this as an attempt to convince Christians that everything is fine if they accept that Jesus is Savior but are left free to compromise on lesser points. In other words, too many Southern Baptists leaders are not making are who observe all things but rather people who pick and choose from the Bible.

The book is not exclusively about trans and LGBT issues in the church; however, it does cover the fractures the issue caused within so-called conservative Christianity.

Another similar issue Boyer examines is the work of Russell Moore. Moore is the former head of the Ethics and Religious Liberty Commission (ERLC) of the Southern Baptist Convention (SBC). Moore has often misapplied Romans 13, according to Boyer.

Unsurprisingly for our readers, Dr. Russell Moore advised surrender in a battle of the Culture War.

In the book, Boyer examines how “Moore advised Christian civil magistrates to go quietly away and ‘protest . . . as a citizen’ when the state instructs them to defy the law of God. Perhaps this advice is based on an erroneous interpretation of God’s sovereignty, which is often used today to avoid Christian responsibility. However, people in scriptural examples took just the opposite course of the one Moore urged,” (p. 168).

Boyer has a special world for pacifists. According to him, this isn’t biblical. Whether it was Samuel anointing David as King while Saul reigned or Queen Esther asking to save her people from slaughter, biblically motivated people are not quiet. They are active. They are not passive.

And then Boyer delivers a devastating analysis. He writes, “If we apply Russell Moore’s reasoning, Esther should have submitted to the Persian law (which was not in itself a command to disobey God in any way) and trusted God’s sovereignty to deliver His people. What she did instead: ‘So will I go in unto the king, which is not according to the law: and if I perish, I perish’ (Esther 4:16, emphasis added). The law itself demanded nothing immoral of Esther—except silence in the face of terrible evil.

“If we apply Russell Moore’s reasoning, Corrie ten Boom’s defiance of the Nazis by hiding Jews was defiance of Romans 13. After all, she was not being forbidden from telling the Jews about Jesus,” pp. 170-171).

Boyer continues the examples. However, I think this suffices to show both he insightful analysis and how the Bible stands in contradiction to men like Russell Moore and J.D. Greear.

You can find out more about God, Caesar & Idols at https://www.christandculturemedia.com/ or by visiting Amazon where you can buy the book in print or on Kindle.