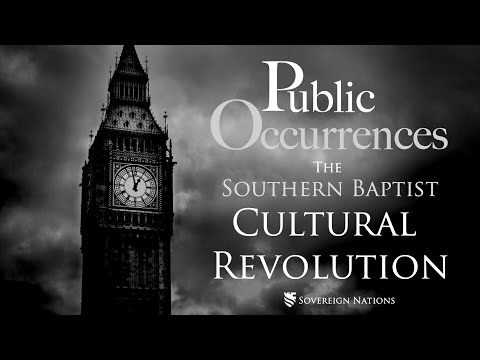 Why did your pastor start talking like Kamala Harris? In a podcast Michael O’Fallon of Sovereign Nations explains why—top leaders began the Cultural Revolution within the Southern Baptist Convention. According to O’Fallon, it is all about preparing the church to become agents of the Great Reset agenda.

“When Sovereign Nations had our conferences in 2017, 2018 and 2019, we provided the answers for those who wondered why their senior pastor started to sound an awful lot like Kamala Harris,” O’Fallon said. “Well, it’s because their senior pastor was most likely a company man, and so when Ed Stetzer or Al Mohler or Russell Moore came to speak to them about a change that was going to be happening.”

O’Fallon names names. He reveals the men and women behind the Woke transformation of the Southern Baptist Convention (SBC). What started small in 2010 accelerated around 2018 into a full acceptance of Race Marxism.

“About 2019 to 2020 where Al Mohler, Danny Akin, Jarvis Williams, J.D. Greear, Ed Litton, Beth Moore, Karen Swallow Prior, Russell Moore, David Platt, Joe Carter, Ed Stetzer, Willy Rice, and in many churches across the nation began to preach the false gospel of vengeance of Critical Race Theory. They began to transition the church in such a way that the church would embrace Race Marxism,” O’Fallon said.

Why? To become agents of change. To push the church in the direction that secular elites are pushing—toward the Great Reset, according to O’Fallon.

The new system created by the Great Reset.

O’Fallon then gives some advice on how to save the SBC (and our liberties).

“The only other choice outside of Tom Ascol and Voddie Baucham is the continuation of the long march through the Southern Baptist institutions, and we have a responsibility to save what the lord has entrusted to us. So show up in Anaheim because we must win,” O’Fallon said.