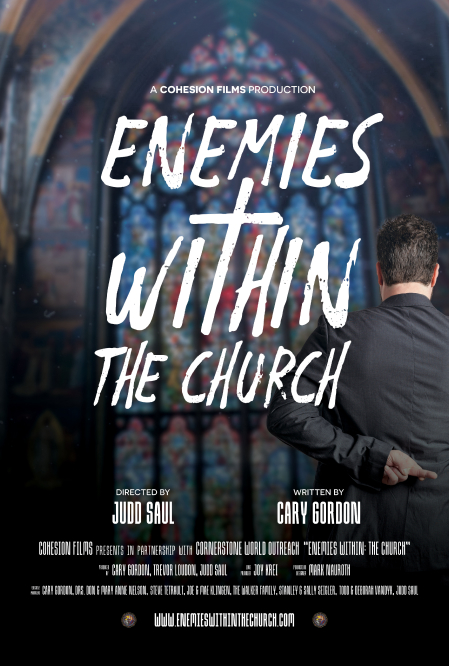 Enemies Within the Church—The film Evangelical Elites like Adam Greenway tried to ban—topped 300,000 viewers in the last week, according to numbers from the film’s producers.

One Week Special 20% Discount with coupon code: GREENWAY at Enemies Within the Church.

According to the producers of Enemies Within the Church, at least 300,000 people have seen the film based on DVD sales, stream sales, and screenings to groups large and small. That means at least 300,000 people have watched the film exposing the Leftist infiltration of the church. They watched the film despite Evangelical Elites like Southwestern Baptist Theological Seminary President Adam Greenway trying to ban the film!

“The movie has crossed domination lines,” said film producer and director Judd Saul. “Lutheran’s, Baptists, Catholics, Wesleyans, Pentecostals, Presbyterians, and more are all buying our film and showing it in their churches.”

The reaction from churches is overwhelming. The film has made a huge difference among churches of all types and sizes. In fact, some churches were inspired by the film to update their bylaws to prevent a Woke takeover of their church.

“I just spoke to an IFB pastor in Florida today that is using it as a Bible study,” Saul said. “Churches large and small who hate the Woke movement love the film. I spoke to one church that has 2,500 members. The pastor made the entire staff, and all the Deacons watch the film and then they voted to redo their bylaws to prevent woke staffers and pastors from getting into the church.”

And the Enemies Within the Church film is hurting the financial position of some Woke ministries.

“We have gotten tons of emails and phone calls from parents asking about seminaries,” Judd Saul said. “We know for a fact that we have cost woke seminaries by encouraging parents not to send their kids there.”

Producers of the film have also been told via emails that donors are redirecting gifts away from Woke organizations exposed in the film.

Also, the movie is once again on discount. Take 20% off with the discount code: GREENWAY at checkout.

Leftists infiltrating the church won’t be getting a break as Judd Saul and the EWTC team are already readying their next project. All Saul would say now is that when they are ready, the will make an announcement.