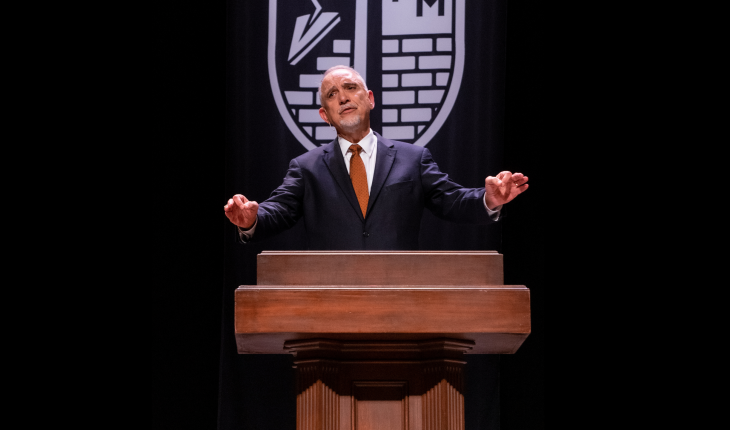 Calvinists & non-Calvinists pledge to cast their ballots for Dr. Tom Ascol in fight against leftist drift of the Southern Baptist Convention.

Conservative Southern Baptists tabbed Tom Ascol, a leader who bravely stood against Woke infiltration of the Southern Baptist Convention (SBC), to carry their standard against the forces of bureaucratic corruption and rampant liberalism. The Daily Wire exclusively reported the nomination Tuesday morning. A full open letter announcing the nomination was published shortly later on the Capstone Report.

The nomination drew praise from across the Southern Baptist theological divides—including from Calvinists and non-Calvinists.

Rick Patrick, pastor of First Baptist Church of Sylacauga, Alabama, said he will be voting for Tom Ascol in Anaheim. Patrick is a prominent leader among non-Calvinist Southern Baptists.

“Calvinism has been one of the two Southern Baptist salvation doctrine streams since 1845. With my feet planted firmly in the other stream, I am nevertheless planning to vote for Tom Ascol and Voddie Baucham. It is a fair question to ask why,” Patrick said.

Patrick then goes on to explain how Woke Neo-Marxism is a threat to the Gospel that requires cooperation.

“Historically, those of us within the SBC embracing beliefs I now refer to as Provisionism (Christians who disaffirm Calvinism in favor of salvation doctrine as preached by Adrian Rogers or Billy Graham) have always cooperated with classic Calvinists such as Tom Ascol and Voddie Baucham,” Patrick said. “Why did this partnership only experience such a serious stress fracture with the arrival of New Calvinism? What was truly different about this manifestation of Calvinism that could produce such a schism?

“The SBC is burning to the ground today because of worldly ideologies that were packaged within the New Calvinism pushed by TGC and others over the past fifteen years. I was among their strongest critics, for I felt there existed a ‘trojan horse’ of ideas hidden within this New Calvinism and inseparably bound to it, weakening our witness and diluting our gospel. Today, we speak of this hidden cultural baggage as wokeness, cultural Marxism, critical race theory, and intersectionality. It is not Calvinism, but wokeness that is now splitting our churches. (See McLean Bible Church or First Baptist Naples.)

“When your house is on fire, and the firemen show up at your doorstep, you don’t ask about their political party or college football loyalties. You just want them to put out the fire. I believe Tom Ascol and Voddie Baucham can and will put out this fire, extinguishing the flames of wokeness and cultural Marxism that threaten to consume us. If Southern Baptists will let them, they will clean up this mess. Then we can go on and agree to disagree about salvation doctrine until Jesus calls us home.”

Patrick’s comments show the recognition by a growing number of conservatives that Wokeness is a threat to the Gospel and that only by a coalition can defeat the Leftist infiltration of SBC institutions.

In fact, another old school SBC Traditionalist Ronnie Rogers was one of the 11 Southern Baptists to place Tom Ascol’s name into nomination in the open letter.

Dr. Mark DeVine, a Samford Beeson Divinity School professor, was part of the 11 Southern Baptists signing the open letter nominating Tom Ascol as SBC President. DeVine is a Calvinist with extensive experience on the mission field.

DeVine first became aware of problems in the Southern Baptist Convention in 2015. By 2016 with Russell Moore’s behavior on the pages of the New York Times and Washington Post, DeVine was alarmed and saw serious problems for the SBC.

“Since 2015 I’ve been researching the SBC (lots of my longtime friends and former classmates and partners in ministry and publishing) and the reformed resurgence, young, restless, and reformed, the Keller movement that I had welcomed, participated in, defended in print and celebrated for years and, as you know, started publishing articles detailing my opposition to what has happened and analyzing its causes,” DeVine said.

DeVine’s articles include How Partisan Politics Captured And Fractured the Evangelical-Industrial Complex in The Federalist and an article in The American Spectator exposing the problems of Mark Dever’s and David Platt’s politics.

So, DeVine has done a lot to expose the problems in the Reformed Resurgence or Young Restless and Reformed movement. His work shows that the dangers presented by Wokeness is greater than the disagreements among conservatives, according to DeVine.

“For years Paige Patterson and Al Mohler cooperated with each other to rid the SBC of as much protestant liberalism as they could, deeming that shared goal as more urgent than their differences over soteriology,” DeVine said. “With Ascol’s nomination, we are seeing a reiteration of such a coalition. It does not indicate that the Calvinist/non-Calvinist divide is not important within the coalition. But it does, it seems to me, demonstrate that the threat posed by the capitulation to woke culture/ideology we see in the Keller/YRR movement is deemed by both groups as so urgent we must join in partnership to oppose it.”

A Message from the Conservative Baptist Network via Mike Stone?

Now, the Conservative Baptist Network has not yet endorsed a candidate. However, sources told the Capstone Report that the CBN would endorse a full slate of candidates for presentation in Anaheim. Further, the sources said that while the CBN has not yet made any endorsement, that Ascol and Baucham have significant support from within CBN. Many of the 11 listed as on the nomination letter are involved with the CBN.

Mike Stone, the 2021 CBN nominee for SBC President and the man who endured a character assassination attempt at the hands of the Woke, Leftist Russell Moore and his cronies, endorsed Tom Ascol. Stone said he would cast his ballot in Anaheim for Dr. Ascol.

“Tom is a pastor, a preacher, a writer, and a staunch advocate for conservative Bible principles,” Mike Stone said in a statement. “For years, Tom has been on the front lines of addressing the issues that currently confront the SBC. He has done so in a Christlike manner that is both winsome and steadfast. Tom Ascol understands the need for Biblical sufficiency over cultural ideologies and Biblical authority over man-centered pragmatism.”

Stone said that he prayed that Ascol would take point after the events of the 2021 SBC Annual Meeting.

“I was thrilled to hear of the willingness of my friend, Dr. Tom Ascol, to be nominated for the presidency of the Southern Baptist Convention this June in Anaheim, California,” Stone said. “Although Tom has served his local church for decades and has blessed the body of Christ through Founders Ministries and The Sword and the Trowel podcast, he has not previously entertained election to SBC office. Since the 2021 SBC annual meeting, I have been praying the Lord would lead Dr. Ascol in this direction.”

Ascol fought the infamous Resolution 9 on the floor of the Southern Baptist Convention’s Annual Meeting. You might recall, Resolution 9 was adopted at the 2019 Annual Meeting in Birmingham. Resolution 9 promoted the use of Critical Race Theory (CRT) and Intersectionality as “analytical tools.”

Ascol and Founders Ministries produced a video “By What Standard” that rocked the Southern Baptist Convention exposing the Trojan Horse of Critical Race Theory along with the rise in theological liberalism including the promotion by certain cliques in the SBC of women preaching.

The film made a significant contribution to informing the public of the growing liberalism within the Southern Baptist Convention.

The work on the floor opposing Resolution 9 in Birmingham and then attempting to get SBC Elites to do the right thing and allow the convention in Nashville to repudiate the SBC’s approval of Critical Race Theory and Intersectionality, made Ascol into a celebrity among conservatives.

Ascol’s nomination appeals across what once seemed an impassible theological divide.