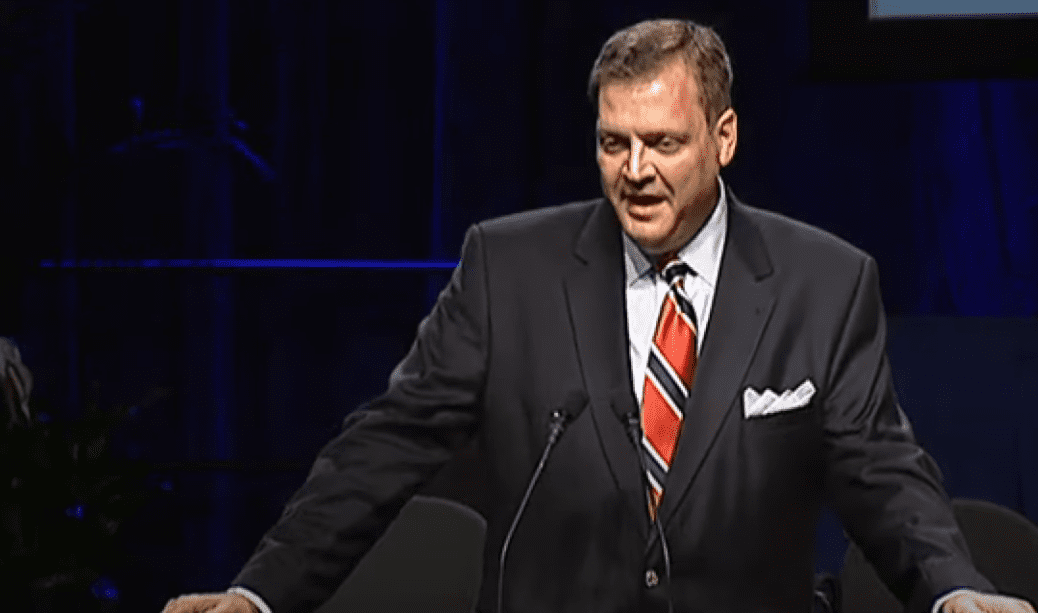 The 2011 NIV was condemned by the Southern Baptist Convention via resolution June 1, 2011. Albert Mohler supported that resolution. Now, Dr. Mohler publishes a study Bible based on that questionable translation.

Though the translation was rejected by the SBC via Resolution, the new Study Bible was promoted through the SBTS email list.

NIV 2011 changes the very words of God to make them more palatable to Leftists and Feminists by removing God’s language of patriarchy and ‘toxic masculinity.’

Al Mohler’s Grace & Truth Study Bible is based on the 2011 NIV text that was repudiated in a resolution by the Southern Baptist Convention and previously by Al Mohler himself.

According to the SBC Resolution,

“WHEREAS, Seventy-five percent of the inaccurate gender language found in the TNIV is retained in the 2011 NIV; and

WHEREAS, The Southern Baptist Convention has passed a similar resolution concerning the TNIV in 2002; now, therefore, be it

RESOLVED, That the messengers of the Southern Baptist Convention meeting in Phoenix, Arizona, June 14-15, 2011 express profound disappointment with Biblica and Zondervan Publishing House for this inaccurate translation of God’s inspired Scripture; and be it further

RESOLVED, That we encourage pastors to make their congregations aware of the translation errors found in the 2011 NIV; and be it further

RESOLVED, That we respectfully request that LifeWay not make this inaccurate translation available for sale in their bookstores; and be it finally

RESOLVED, That we cannot commend the 2011 NIV to Southern Baptists or the larger Christian community.”

Dr. Mohler and other SBC leaders like Paige Patterson supported the resolution. Dr. Mohler said the NIV 2011 was a direct attack on important biblical doctrine.

According to this report, “The resolution, Mohler said, reflected his concerns ‘related to the gender issue and specifically related to the linkage between a verbal plenary understanding of inspiration and the importance of an accurate and formal translation.’”

The new Grace & Truth Study Bible was released by Zondervan with Dr. Al Mohler serving as General Editor. The book was promoted in an email sent out from the Southern Baptist Theological Seminary email list.

According to research presented to Lifeway, “The 2011 NIV text retained 75% of the inaccurate gender language from the discredited TNIV.” (You can read the entire 37-page research report on the gender language problems with the NIV 2011 translation here.)

The choice of word here is significant. The Hebrew word clearly used was women.

A few other quick examples should suffice here.

One Southern Baptist professor said, “These and many other changes of the 2011NIV are capitulations to the spirit of the age. This is politicizing Bible translation (from the left’s perspective, of course). The 2011NIV does not like God’s choice of patriarchal language, so it must change God’s language to accommodate modern, leftist sensitivities of the culture. This neuters God’s word. Always against the masculine, of course. I am sure that they do not want people to see the Bible as promoting ‘toxic masculinity.’”

There are many other examples of inappropriate use of language in the 2011 NIV. Consult this linked work for more analysis from the Council on Biblical Manhood and Womanhood.

Again, it is important to note here that Dr. Mohler and SBTS promoted via its email list this new Study Bible project.

Also, remember that Dr. Mohler previously condemned the 2011 NIV. What changed in the last decade to make the translation’s assault on verbal plenary inspiration (Dr. Mohler’s own words) acceptable?

Was it a publishing contract? Was it a desire for a legacy? Or, was it something else?

And what makes it acceptable for SBC entities to consistently ignore the expressed wishes of the Southern Baptist Convention? Lifeway ignored the resolution. Now, one of its supporters, Al Mohler, ignores it too.

Or we might even put it more sharply, are dollars now more important than the very words of God?