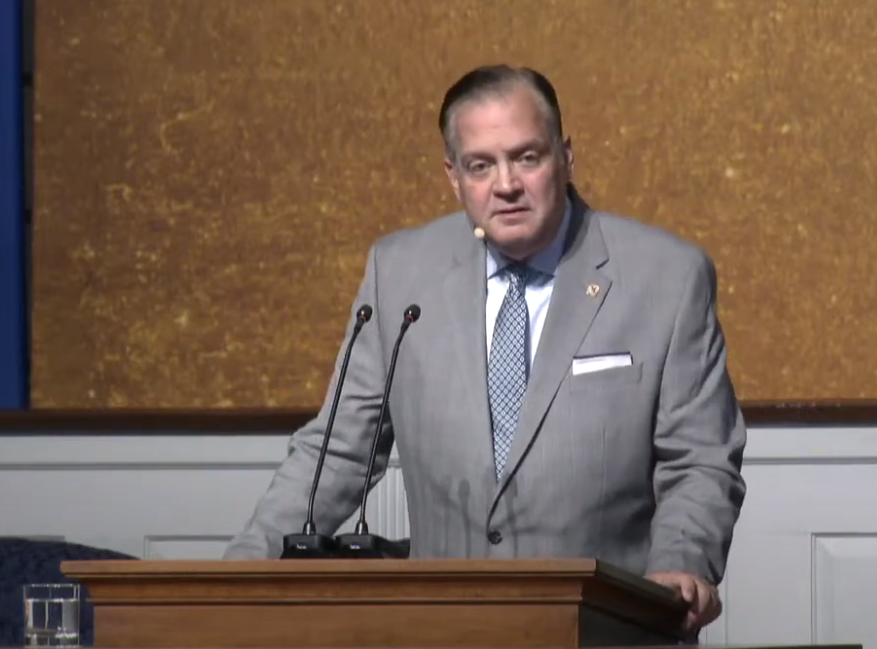 Dr. Albert Mohler speaks about Ed Litton’s plagiarism and how pastors, theologians and the Southern Baptist Convention should respond.

Southern Baptist Theological Seminary President Albert Mohler said he is alarmed by plagiarism among Southern Baptist pastors when asked about the Ed Litton Sermongate scandal. In a long reply to the question, Mohler said some megachurches appear to be receiving “manufactured sermons” and that is a crisis for evangelicals.

Mohler responded to a student question during the SBTS President’s Forum this morning. Mohler was asked how pastors, students and the SBC should respond to the Ed Litton plagiarism scandal.

“Plagiarism is a very serious thing,” Dr. Mohler told his students at the Southern Baptist Theological Seminary. Mohler began his answer by carefully defining plagiarism and the way pastors should approach the issue of both theft and the fraud of passing off another sermon as someone else’s.

“My alarm is about the state of preaching in the Southern Baptist Convention and the larger Evangelical world,” Mohler said. “How much of this is happening? How many congregations are not hearing biblical exposition, faithful exposition, coming not only in the voice of their preacher but through that preacher’s serious, studious, arduous and joyous engagement with the text? This is a crisis that I think we face, and this news story has now brought to us.”

And the Ed Litton Sermongate scandal that was covered even by the New York Times highlights this, according to Mohler.

“Looking at this crisis of manufactured sermons, it doesn’t appear at all to be consonant with the model of preaching in the New Testament and with the church’s humble understanding of preaching throughout the Christian centuries” Mohler said. “This particular news story has revealed the fact that it is evidently increasingly common in many circles for manufactured sermons be pretty much Sunday by Sunday the norm. I think that is something that should alarm us.”

Mohler said that this “Age of Manufactured Sermons” could explain why so much of today’s evangelical preaching is “Slick” while lacking substance.

Mohler said SBTS takes plagiarism seriously. He said during his tenure as president the school rescinded a Ph.D. for plagiarism and has expelled students over this issue too. Mohler pointed out that for many years, (as the Capstone Report has detailed previously) that SBTS banned the use of professional research services.

Then, he drilled down into more specifics about the Ed Litton Sermongate scandal and the SBC.

“There simply is no doubt that this conversation we’re having right now is occasioned by the fact that the president of the Southern Baptist Convention, Dr. Ed Litton, has been involved to some degree in preaching someone else’s sermon. Beyond that we can see the whole issue of the kind of manufacture of sermons that is now widespread. I would simply have to say that that is precisely not what we are trying to teach or to hold up as an example here,” Mohler said.

Now, is that the end of the issue?

“From this point onward about that role, that has to be between Dr. Litton and the Southern Baptist Convention. And I of all people, should not imply that I know the answer to that question. Nor that the Southern Baptist Convention would ask me that question,” Mohler said. “I have to do my best to act honorably and to be honorable in the situation. I hope I have. It would not be honorable to fail to answer the question you asked. It would not be honorable, I think, for me to take it where some would like me to take it.”