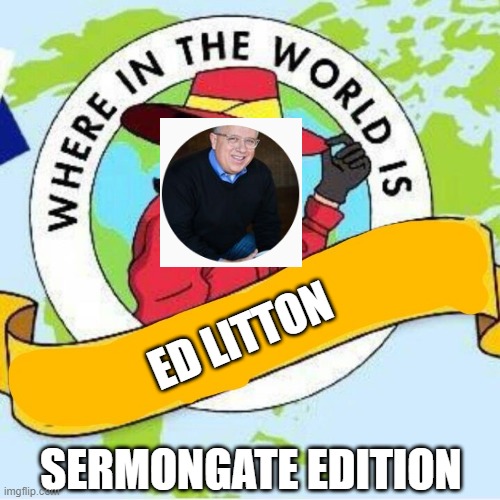 Where in the world is Southern Baptist Convention President Ed Litton? He briefly surfaced to distract people from his plagiarism and lies. Whoops, we mean to unveil his sex abuse task force. More on that in a future column. However, there are some new details in the Sermongate plagiarism scandal thanks to WORLD Magazine.

According to the WORLD, “An associate pastor at Redemption Church told WORLD that Litton was out of the office and unavailable for interviews for a few weeks.”

So, the SBC President is hiding behind an associate pastor?

This is Big Evangelicalism. And it isn’t pretty.

So, where is Ed Litton?

A few weeks ago, he was spotted traveling in Colorado.

Any other sightings of the missing SBC President?

Litton has mostly avoided the spotlight. Obviously, he is hoping the outrage will die.

However, this seems a forlorn hope.

Everyone knows Ed Litton is an illegitimate president.

He disqualified himself from as both a pastor and SBC President. He should do the decent thing and resign. Of course, he shows no inclination of resigning either from his church or the position of SBC President.

What does that show about the wickedness of the Southern Baptist Convention and the SBC Elites who enable this demented behavior?

To cling to the levers of power for just one more year, the Woke SBC Elites tossed away any semblance of biblical fidelity.

If an SBC president were caught in any other moral lapse, would we hear this kind of silence? Are there any SBC pastors and leaders calling for this wicked man to repent and resign?

Instead, all people are promised is that Ed Litton will try to do things better in the future.

As the WORLD reported, “The church’s leadership provided a statement saying Litton had shown a ‘commitment to do things differently’ in his discussions with the elders. The statement said the leaders are developing a church resource that will define plagiarism and outline the guidelines the preaching team will follow to ensure proper citation going forward.”

Let’s hope this statement is better than the copy and pasted doctrinal statement on the church’s website when Ed Litton was elected SBC President.