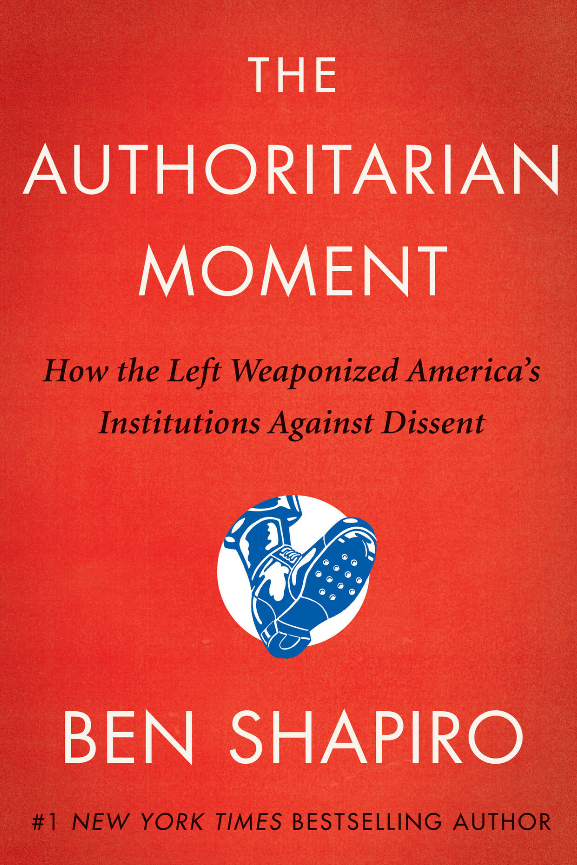 Ben Shapiro is right—it is time for conservatives to fight against Leftist takeovers of our institutions. It is something we and other Evangelicals have been doing for years. As institution after institution fell to Leftist infiltration, a few brave contrerévolutionnaires fought to rally our churches.

If our churches fall, the West falls. And if the West falls, then not only do our liberties die but Christianity enters a new Dark Age. While this may be God’s plan, we have a responsibility to stand against this evil.

Over the last couple of years, we have chronicled the Leftist infiltration of our conservative churches. Now, it is time to fight back. Thankfully, Ben Shapiro’s excellent new book The Authoritarian Moment: How the Left Weaponized America’s Institutions Against Dissent provides some advice for how to stand.

Why apply political lessons from Ben Shapiro to a church struggle? Because we are not fighting against only a theology—we are fighting Leftists. Leftists in our churches are the same as Leftists in government. They have the same worldview. They use the same methods.

Recognizing this is important. For example, Leftists want to silence you.

Shapiro advises we reject Leftist rules. He writes, “The first step in unraveling authoritarian leftist dominance of our institutions is our refusal to abide by their rules.”[1]

They do this by insisting all discussion be held privately. Thus, it narrows those who are even aware there might be an issue. This is why church business meetings now feature this authoritarian thuggery.

Of course, that brave man who stood and demanded accountability exposed the authoritarian impulse in his church. This is often what happens. See how First Baptist Church Ft. Lauderdale expelled hundreds of members for discussing problems at the church. More on this point later.

Shapiro writes, “Imagine if, instead of rushing to respond to the pseudo-urgent needs of the latest establishment media–driven mob, we simply shrugged.”[2]

This is good advice. Notice the last couple of days Big Eva sent out its Woke Mob to attack Voddie Baucham and Owen Strachan. Our response should be to shrug.

It is not that conservatives reject all accusations—it is just that most accusations delivered by Leftists are, if you’ll pardon the vernacular, crap.

One professor accused Dr. Baucham of plagiarism for one similar sentence and then misattributing quotes. The moron with a Ph.D. apparently either could not or would not see Dr. Baucham put quotation marks around the exact quotations. Everything else was Dr. Baucham’s summary. In other words, the attack on Dr. Baucham was leftists being leftists.

That doesn’t mean Dr. Baucham is faultless—it just means that our instinct should be to either mock these Leftist attacks or ignore them.

If evidence comes out, conservatives are free to change their opinion. However, when the Leftist mob attacks—and they will attack—do not spend your time defending.

Mock and move on.

Taking the offensive to save our churches

At this point, everyone who pays attention knows the Southern Baptist Convention (SBC), its oligarchical elites, and many megachurches are corrupt Leftists.

Notice how depraved the SBC Elites are about the Ed Litton Sermongate scandal. They are willing to allow Litton to hold power even after he was exposed as a liar and fraud for extensive, decade-long sermon plagiarism. Litton preacher sermons as his own from pastors like J.D. Greear and Tim Keller.

In the old days, Litton would be forced to resign. These are new times and Ed Litton is Woke. Leftists think they can hold power and ignore biblical commands about honesty.

How did Leftists get all this power?

Well, they are very good at networking. Or, more specifically, using links like The Gospel Coalition (TGC) and Together for the Gospel (T4G) to spread influence. This included making new celebrities by platforming Woke pastors, exploiting the celebrity pastors, placing a new group of pastors in vacant large churches, and using the Woke Twitter mobs to demand winsomeness.

The worst thing in the world, according to Big Eva Elites, is for someone not to be winsome on Social Media.

And by winsome, they mean not criticizing Big Eva Elites or leftist political causes.

We don’t want to be seen as judgy, Big Eva Elites warn. That’s bad for our brand.

However, just as Shapiro points out that conservativism risks offense to tell the truth and fight against wrongs, so too Christianity risks all to spread the Truth.

In fact, Christians believe it is unloving not to correct false teachings and doctrinal drift.

Just like all Leftists, they insist on the suppression of dissent.

Which leads us to how we must fight back.

So, to defeat the Leftist network requires our own. As General Stanley McChrystal put it while fighting insurgents, “It takes a network to defeat a network.”

Shapiro even talks about this in his prescription for a conservative stand against Leftist tyrants.

He writes, “It’s time to renormalize—return normalcy—our institutions. To do this requires the creation of an intransigent minority. Because too many Americans have allowed the authoritarian Left to cudgel them into silence or agreement, the key here is courage. Americans must be willing to stand up, speak out, and refuse to acquiesce to the power hierarchy.”[4]

What happened at McLean Bible Church is the example that Christians at all our churches must do.

We must be inspired by the actions of these conservative dissidents who read their Constitution and used it. Their courage exposed the moral corruption of David Platt and his cronies.

If it were not for Jeremiah Burke and about 200 others standing together, we would not know the extent of David Platt’s arrogance or his ability to lie from the pulpit. They exposed David Platt and his unchristian lust for power along with his Hillary Clinton-like willingness to do anything to cling to power.

And we know this now because of their willingness to stand against all the fiery arrows that David Platt could sling at them from his bully pulpit.

These brave men and women—a group of all ages from millennials to seniors—are doing exactly what Shapiro advises, refusing “to acquiesce to the power hierarchy.”

It takes courage to do this. Look at what happened at First Baptist Church of Naples, Florida. Those Christians at FBC Naples were labeled racist for simply asking questions about a pastor they feared would be Woke.

In a similar church fight at First Baptist Church of Ft. Lauderdale, Florida, the Woke pastor expelled anyone and everyone who might be associated with questioning his power. This is a painful thing. As Brian Keno, a leader in the fight to save FBC Ft. Lauderdale said, this was the church where he was baptized. Now, he was kicked out by a letter.

Standing comes with a price.

There will be a price.

However, it is a price worth paying if you care about your church and your children and grandchildren’s future.