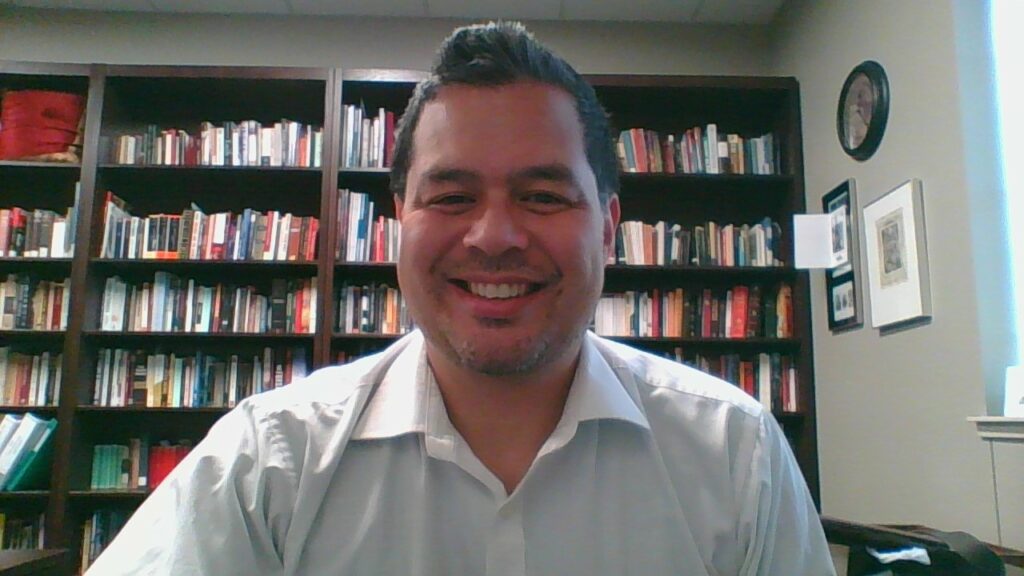 “I believe this will break the mold and not be like other Annual Meetings,” Lopez said. “There is a lot going on and probably the biggest thing at stake is the election of the next president to replace J.D. Greear.”

Lopez said Al Mohler is the Swamp or insider candidate—Mohler is the candidate who is “the classic old boy network, machine operator.” He is the Lynn Cheney of this race.

“I’ve prayed on this,” Dr. Lopez said. “I’ve come to whom I’m going to endorse…I have to be totally frank. I like Mike Stone a lot. I like a lot of the things he brings up…But Randy Adams is the person I’m going with. If he were to actually get elected, it would be such a massive shift that we could actually see some changes.”

Resolution on Transparency and Accountability

Dr. Lopez also submitted a resolution for consideration at the SBC Annual Meeting in Nashville. The resolution is in the hands of the Resolutions Committee. So, watch to see what the committee does with this. Also, share your thoughts on it.

Here is the text of Dr. Lopez’s resolution on Transparency & Accountability in the Southern Baptist Convention:

WHEREAS, in the Second Book of Kings, the Bible presents Josiah as the greatest approximation of the virtues of a leader, for the twenty-third chapter of the book states, “And like unto him was there no king before him, that turned to the LORD with all his heart, and with all his soul, and with all his might, according to all the law of Moses; neither after him arose there any like him” (2 Kings 23:25);

WHEREAS, Josiah’s leadership was moral, insofar as he rid Judah of sodomy, idolatry, and other sins (2 Kings 23:5-8);

WHEREAS, Josiah’s leadership dealt with ecclesiastical matters, as he forced reforms on the priesthood and purged it of those who were evil, restored the Passover, and ensured that the scriptures would be read and followed once more in Judah (2 Kings 23: 21-27);

WHEREAS, Josiah’s leadership was political because his good deeds were carried out within his roles as king and descendant of David, the scriptures saying of Josiah, “And he did that which was right in the sight of the LORD, and walked in all the way of David his father, and turned not aside to the right hand or to the left” (2 Kings 22:2);

WHEREAS, Josiah’s leadership was economic because his first act of reform dealt with the stewardship of money, the scripture saying of his actions, “Go up to Hilkiah the high priest, that he may sum the silver which is brought into the house of the LORD, which the keepers of the door have gathered of the people” (2 Kings 22:4-7);

WHEREAS, Josiah’s example, so clearly celebrated in the Word of God, compels us to study him, for Solomon says in Proverbs, “Now therefore hearken unto me, O ye children: for blessed are they that keep my ways; hear instruction, and be wise, and refuse it not; blessed is the man that heareth me, watching daily at my gates, waiting at the posts of my doors; for whoso findeth me findeth life, and shall obtain favour of the LORD” (Proverbs 8:32-36);

WHEREAS, the Southern Baptist Convention’s large size, bureaucracy, and considerable holdings have created many positions of power, including entity presidents, trustees, chairmen of boards, directors, officers, provosts, deans, treasurers, editors, and chief executive officers; all of whom must be held up beside Josiah’s example for consideration since Jesus Christ says of leadership, “Ye know that the princes of the Gentiles exercise dominion over them, and they that are great exercise authority upon them; but it shall not be so among you: but whosoever will be great among you, let him be your minister; And whosoever will be chief among you, let him be your servant,” (Matthew 20:24-7), while Solomon quotes the Lord in Proverbs, saying “the fear of the LORD is to hate evil: pride, and arrogancy, and the evil way, and the froward mouth, do I hate; counsel is mine, and sound wisdom: I am understanding; I have strength; by me kings reign, and princes decree justice; by me princes rule, and nobles, even all the judges of the earth” (Proverbs 8:13-15); which together signify that those in leadership positions must hold themselves to high standards, and that they must demonstrate sedulous vigilance against self-aggrandizement, bias, favoritism at the expense of godly fidelity, and arrogation to themselves of resources that belong to Southern Baptists and the Kingdom of Christ;

WHEREAS, in light of King Josiah’s example and the scriptures cited above, there is no place in a Christian denomination for secrecy, particularly about money;

WHEREAS, in light of King Josiah’s example and the scriptures cited above, there should never be false statements made by Southern Baptist leaders against common Southern Baptists in order to score political advantage;

WHEREAS, in light of King Josiah’s example and the scriptures cited above, there is no place in a Christian denomination for nepotism, favoritism, blacklisting, or collusion, since all of these represent forms of corruption of the kind King Josiah uprooted;

WHEREAS, in light of King Josiah’s example and the scriptures cited above, there is no place in a Christian denomination for leaders restricting freedom of speech, of either subordinates, congregants, or peers; as King Josiah had to reform Israel after Manasseh and other Samarian and Judahite kings persecuted prophets in order to prevent the people from decrying their bad deeds;

RESOLVED, the Southern Baptist Convention grieves the misconduct of entity presidents, trustees, chairmen of boards, directors, officers, provosts, deans, treasurers, editors, and chief executive officers, who have abused their power and used it contrary to the standards set by King Josiah;

RESOLVED, the Southern Baptist Convention grieves the conduct of Southern Baptist Convention presidents who have used their appointment power to populate the resolutions committee year after year with cronies and political allies, with the result that many pertinent resolutions, such as this author’s 2019 resolution “On Whistleblowers and Freedom of Conscience,” became dismissed from floor discussion based on convoluted dispositions, while other irrelevant and counterproductive resolutions, such as the 2019 resolution on critical race theory or the 2018 resolution on justifying slavery using the curse of Ham, get passed with the Convention’s endorsement for seemingly political reasons;

RESOLVED, the Southern Baptist Convention grieves the use of non-disclosure agreements, the practice of gentleman’s agreements, and the widespread use of blacklisting throughout the Convention to protect small numbers of people who hold institutional power at the expense of true and faithful service to the Kingdom of Christ;

RESOLVED, the Southern Baptist Convention grieves the use of summarized financial information that makes it difficult to see where money is actually being spent, a practice so commonly practiced by entity leaders that many in the Convention sadly take this for granted and do nothing to counteract the massive damage caused by misuse of funds, graft, self-dealing, and profligacy by leaders who retain control of funds year after year with no accountability;

RESOLVED, the Southern Baptist Convention grieves the abuse of church-planting funds in domestic and international missions, to include the purchase of tens of millions of dollars’ worth of domestic real estate to house church planters in the face of consistent decline in church membership and failed church plants, the use of church-planting funds for properties or church planters with questionable ties to people in positions of power, and the actions by the Ethics and Religious Liberty Commission and North American Mission Board in order to undermine reform efforts such as Will McRaney’s pursuit of justice and restitution regarding allegations of defamation and tortious interference with state conventions;

RESOLVED, the Southern Baptist Convention grieves the abuses by Lifeway, the Ethics and Religious Liberty Commission, and other Southern Baptist bodies involved in publishing and conference-hosting, in the way they pass over reputable and qualified writers and speakers in order to platform political allies, cronies, and friends;

RESOLVED, the Southern Baptist Convention grieves the actions of those responsible for publications and conferences, who have used these forms of public witness as a means to blacklist speakers who have challenged those in power and support those who flatter the powerful;

RESOLVED, the Southern Baptist Convention grieves the abuse of trustee positions, in the way that trustees are chosen as political favors and repay their appointers with actions that they should not rightfully take; in the way that influential persons violate standards of conflict of interest, as exemplified by the way that Ethics and Religious Liberty Commission trustees refused to reform the entity with which they were entrusted, and as exemplified by the way that seminary trustees have done nothing to counteract the abuse of power by Adam Greenway and Albert Mohler (revealed in detail by the revelations of Southern Baptist Theological Seminary trustee Tom Rush);

RESOLVED, the Southern Baptist Convention grieves the common weaponization of godly concerns (such as concern for victims of racism and sex abuse), in order to consolidate more power and prestige for elites through ineffective solutions like the creation of a centralized standing committee empowered to disfellowship churches through processes that are even more opaque and corruptible, while the Convention, offering copious coverage to high-profile speakers like Rachael Denhollander or Beth Moore, remains unengaged on massive problems such as same-sex abuse or the purge of faculty of color from Southwestern Baptist Theological Seminary;

RESOLVED, the Southern Baptist Convention invokes the memory King Josiah; calls for massive reform and restitution for the many people whose careers, reputations, ministries, and livelihoods have been damaged by ungodly stewardship by the Convention’s leaders; and insists that its next president be a King Josiah or nobody, for the only person fit to be president of a Christian denomination must be someone willing to cleanse the denomination’s leadership of corruption, cronyism, greed, bias, and vanity; even if this means numerous firings of bad leaders; even if this means angering people who have grown comfortable with and dependent on the Convention’s corruption; and even if some who call themselves Christian accuse reformers of being unchristian; for no denomination that bears the name of Jesus Christ has any reason to exist if its Christianity is nothing but an empty label that allows an elite to enrich itself.