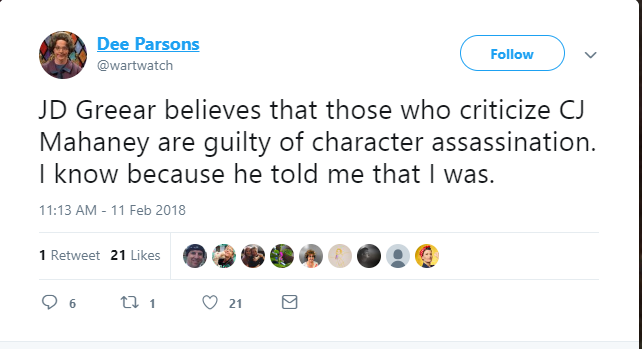 Greear attacked critic of CJ Mahaney; now paints himself as reformer committed to cracking down on churches covering up abuse; Can Southern Baptists trust him?

The Southern Baptist Convention must do more to protect the flock. Sex abusers have no place in the church. However, can we trust the people who empowered scandal-plauged CJ Mahaney to lead these needed reforms? Men like Dr. Al Mohler and Dr. J.D. Greear, current president of the Southern Baptist Convention, defended Mahaney even after public reporting on the serious allegations of Sovereign Grace’s failures in dealing with sexual abuse.

Al Mohler was even making jokes about the Mahaney situation and warmly defending Mahaney’s character.

Showing that J.D. Greear never strays too far from Al Mohler’s view of things, Greear attacked critics of CJ Mahaney. He went so far as to attack Dee Parsons of The Wartburg Watch.

According to Parsons, “JD Greear believes that those who criticize CJ Mahaney are guilty of character assassination. I know because he told me that I was.”

Why was Mahaney protected by these men of God?

Answer: The good-old-boy network of hip, Neo-Calvinists. Being part of the Gospel Coalition and/or directly reporting to Dr. Mohler is the way you advance in Al Mohler’s Southern Baptist Convention.  Here’s a helpful chart. Even the newly named president of Southwestern Baptist Theological Seminary reported to Mohler and wrote pieces for The Gospel Coalition website. 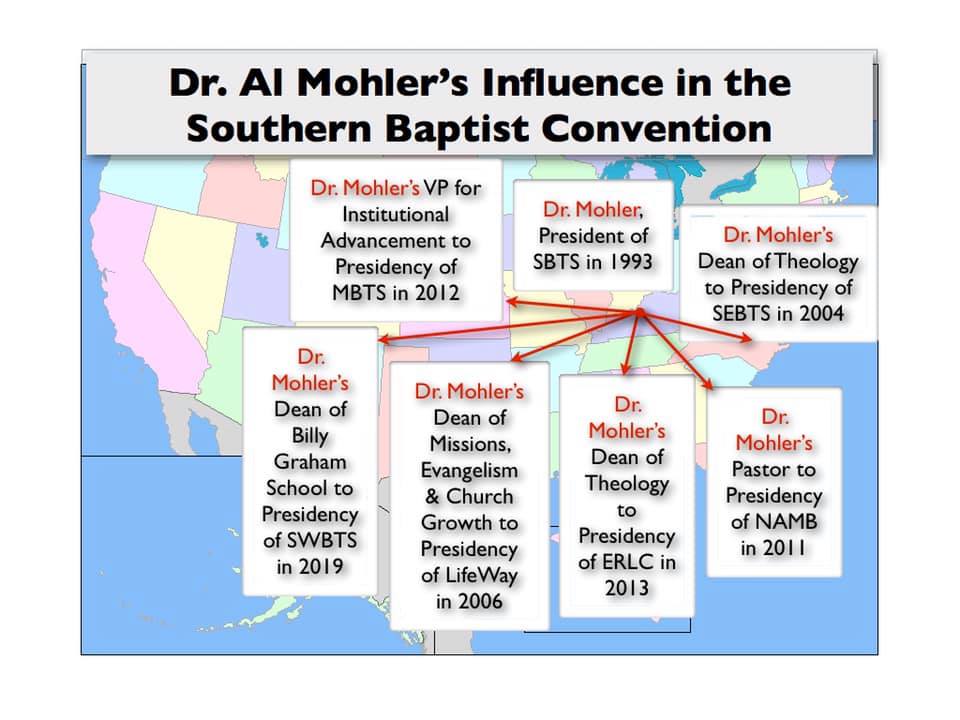 It’s a denominational swamp that would make Washington, DC envious.

Greear was a longtime friend of Mahaney. They had an associating going back to at least 2009 when, Greear described Mahaney as one of his “absolute favorite speakers.” See screenshot of old blog post.

Russell Moore and his Ethics and Religious Liberty Commission are intimately involved in this process too.

Moore has loudly attacked some pastors and remained silent on others—like Sovereign Grace and Mahaney.

According to one writer, “Russell Moore is correct – American evangelicalism is in a time of great peril.  Moore is a little late to the parade, it seems he hasn’t noticed any problems with Sovereign Grace Churches, nor the numerous other scandals in the evangelical world, but then Sovereign Grace Churches unexplainably continues to enjoy the approval of Mark Dever and Albert Mohler, two influential leaders in the Southern Baptist denomination. In the case of Mohler, Moore is beholden to him for his positions at both Southern Baptist Theological Seminary and the ERLC; and Mohler and CJ Mahaney are gospelly buddies, so I don’t expect Moore to ever turn his spotlight on Mahaney and Sovereign Grace Churches.  For an example of how tight Moore and Mohler are, watch this video. The way Mohler describes Moore you would think he was the second coming of Christ.”

The PR situation has turned.

Mohler apologized for his past joke and defense of Mahaney, and J.D. Greear is pushing a package of reforms to include changes to ordination, training and perhaps even dis-fellowship of churches from the SBC.

It is a significant slate under discussion. Much of it needed. Perhaps even more is needed; however, there are serious concerns about the entire process and who is leading it given the SBC insiders devotion to Mahaney.

One longtime and well-connected Southern Baptist described these moves by J.D. Greear and Russell Moore as “unprecedented.”

A Southern Baptist pastor asked if this would be a tool to punish critics of the Woke leadership of Russell Moore and JD Greear.

Another SBC pastor’s mind boggled at the scope of the pending inquiry related to Second Baptist Houston.

Another observer said the Sovereign Grace story was horrible, but largely ignored by this crowd of Neo-Calvinists who were ready to destroy Paige Patterson. He asked, why should I trust them?

That’s the question: Why should Southern Baptists trust the group who defended Mahaney and gleefully cite the termination of Paige Patterson as proof that the SBC has a new willingness to now address the problem?

It’s convenient. Patterson was outside their circle of hip, Neo-Calvinists. He was, therefore, expendable.

3 thoughts on “Can J.D. Greear be trusted on sex abuse after defense of CJ Mahaney?”