With the news of the allegations involving former Alabama offensive lineman DJ Fluker, I feel as though Auburn fans and other envious haters of the Alabama football program are owed an apology. As we’ve already mentioned, a little perspective on the situation offers much needed rationale for those with unrealistic hopes.

The frenzied zeal so many feel right now is just too rich for their limited vocabularies to put into words, and irresponsible shock journalists who want to make the most of this 48-hour window (because that’s as long as it will last) will write whatever adds clicks to their blogs in order to harvest traffic for advertisers to pay up. 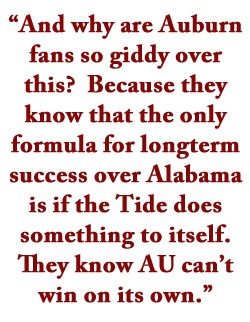 And why are Auburn fans so giddy over this? Because they know that the only formula for longterm success over Alabama is if the Tide does something to itself. They know AU can’t win on its own. It’s never happened before, and it will never happen. Crimson implosion is always their only hope.

But after the dust settles, like most of the Iron Bowls the last seven years under Nick Saban, all that will be left is disappointment.

The same disappointment they felt those January nights while wearing their burnt orange, purple and gold and the Notre Dame color scheme of their choosing will come to roost in this situation as well.

Here are all the facts you need to know.

1.) This situation is nowhere close to the Reggie Bush and USC case. Reggie Bush received upwards of over $250,000 and was living in a beachside mansion worth $750,000. There was overwhelming evidence that USC had full knowledge, yet did nothing. Very different than $12K split between five SEC players with no University knowledge, if the allegations are even true.

2.) This isn’t a case of a player being lured to the University by a booster offering benefits, or even a current player being paid by a booster. It’s a seedy agent doing what seedy agents do, and an individual, not a University official, making a personal decision despite the very best education on agent awareness college football has to offer.

3.) If you haven’t noticed lately, the “We didn’t know” ploy seems to be the magic elixir with the NCAA. Simply, UA has the largest, most comprehensive football staff in the land…so much so that Texas’ Mack Brown has complained about it…yet an individual made a decision on his own. “We did all we could, and we didn’t know he had done this.” That’s all the NCAA will need to hear.

5.) The story has already begun its death. By 9:00am this morning the Twitter trends shifted abruptly to the next Oklahoma State story. Tim Brando, the biggest Bama hater on the airwaves, has already said this will amount to nothing…and it won’t, because of the reasons already mentioned.

Clowns like Al Del Taco, Kevin Scarbinsky, and Clay Travis will sprint past the facts for a good story, because that’s what untalented, undisciplined journalists do. Saying things like “the NCAA can use the Freedom of Information Act” to gain access to documents is just downright comical. The NCAA offers only a gentleman’s aggreement with its schools with no subpeona power, and no real teeth to speak of. Or else Johnny Manziel would be sitting this Saturday. And don’t forget about Mike Slive, the protector of his flock.

But when you are the invincible king of college football, stories like this one offers so much hope to your haters that their misery is almost over. An Alabama player can’t break wind in the shower and it not make the headlines of SportCenter, so the microscope on this one is a little more focused.

But when the dust settles, there’ll be an agreement between the NCAA and the UA Administration, a concession of some sort involving zero crystal footballs, and a hand washing that will leave Auburn fans and other Bama haters out there deflated. Again.

And after the Tide’s victory in College Station this Saturday, and/or after Tim Tebow comes out of the closet in a few days (or the next salacious story that hits the airwaves), this one will be in the books forever.

And in a way, that’s ultimately what will make this so delicious for Alabama fans. The Auburn fans and other haters see land in sight….they really think they have something this time. But they’ll never get to touch it, and it’ll all just float away.

Now they know how we’ve felt all these years…

90 thoughts on “An open apology to Bama haters”