The new college football season is now just a stone’s throw away, and with all the upheaval this offseason regarding Johnny Manziel, you can count on one thing.

He will play every down for the Aggies. 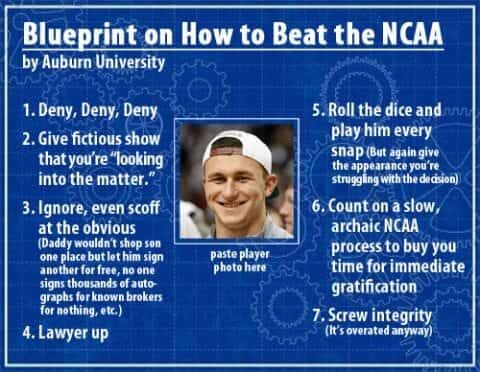 Why? Because they need him; he’s the cornerstone of their offense…even their team…the very key to their potentially unprecedented success in 2013. So what will that mean to his status to play in the wake of unbelievable evidence against him that he violated NCAA rules in accepting large sums of cash (allegedly five figures from one broker among six who have come forward)?

He will play every down for the Aggies.

Texas A&M has become Auburn West. The parallels are staggering, even humorous. A proud agricultural little brother to the bigger, more accomplished state school. A cultish, nauseating facade of integrity (Auburn Creed, Aggie Honor Code). The key to their team and immediate success, their quarterback, at the center of controversy. Mind boggling obvious indications that money changed hands and NCAA rules were trampled.

And yet, he will play every down for the Aggies.

It’s clear in the Johnny Manziel case the Aggies are employing a plan we’ve seen somewhere before. They want to live on credit, rather than hard earned cash. They want the experience of the ride Manziel can take them on in this, certainly his last, season in College Station. And the consequences? Well, we’ll think about them tomorrow, right Aggs?

His presence on the field September 14 will only mean a smaller margin of defeat to the Crimson Tide, and certainly there isn’t a man on the practice field in Tuscaloosa today that doesn’t prefer the opportunty to shut him down…over him being suspended.

And there’s no reason to believe, even with a money trail, the NCAA will do anything of real importance. Georgia’s AJ Green got a four game suspension for selling a jersey for $1,000. Do you really think the NCAA has the kahunas to send a message to rule breaking and sit this superstar for the “latest game of the century” involving Alabama in week three?

But we’ve seen this plan before, and it worked for the Aubies, though the front of innocence has become a well-earned punchline for a program hungry for significance. Looks like another punchline is on its way to south Texas.