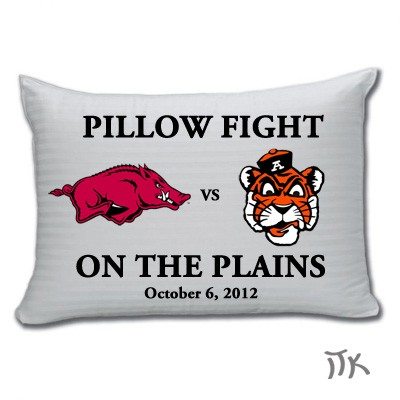 Today worlds collide in Lee County, Alabama as two of the most hapless programs in college football collide on the gridiron.

The dysfunctional Arkansas Razorbacks (1-4) march into Jordan-Hare Stadium to take on the impotent Auburn Tigers (1-3). That’s right, combined the teams are 2-7, with impressive wins over Jacksonville State and LaMonroe (in OT).

Moral Victory U will face the Razorbacks fresh off an impressive showing against LSU two weeks ago, where yet another team rolled into Jordan-Hare uninspired to give the Tigers an “A” game to contend with.

• Will Onterio McCalleb break the NCAA record for most rushes ending with a sprint out of bounds? He only needs 4 to own the record. I mean, there are times he runs out of bounds with his shoulders square to the pressbox. Impressive.

• Will John L. Smith say something stupid in an on-camera interview?

• Will Auburn head coach Frank Chiznik honestly refer to a win in the post game presser as a “great win for Auburn University?”

• Will both defenses hold the total yards gained to under 1,000?

Either way, with an Auburn win Auburn fans will declare that their season has taken an upward turn…a win that would be the equivalent of kicking a kitten. A loss and the armor of a supposed championship program continues to crumble.

23 thoughts on “Arkansas vs. Auburn: Pillow fight on the plains”