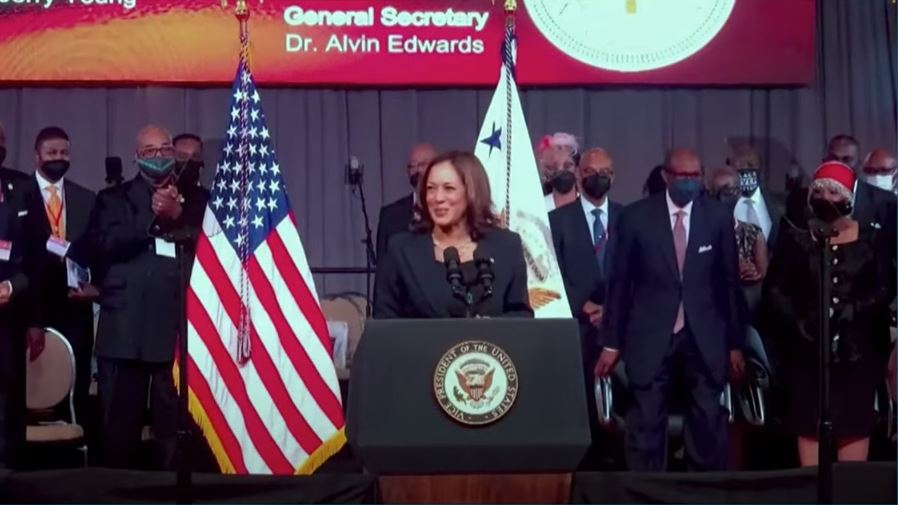 Rabid anti-Trump Southern Baptist pastor Dwight McKissic defended the National Baptist Convention after pro-abortion radical Vice President Kamala Harris spoke at the denomination’s annual meeting. Harris received a round of applause during a speech at the meeting from supposedly Christian pastors and denominational leaders. Yet, McKissic attacked anyone pointing out the problem.

First, here is what Kamala Harris said at the National Baptist Convention. Harris quoted Scripture in defense of her position and for abortion rights—which drew applause from gathered pastors.

Here is the official White House transcript of that section of Harris’ speech. Harris said, “As extremists work to take away the freedom of women to make decisions about their own bodies, faith leaders are taking a stand, knowing one does not have to abandon their faith or deeply held religious beliefs to agree that a woman should have the ability to make decisions about her own body and not have her government tell her what to do.  (Applause.)  And she will choose, in consultation with her pastor or her priest, or a doctor and her loved ones.  But the government should not be making that decision.”

This is troubling. To see the Bible quoted in context of defending absolute sin is repulsive. However, SBC pastor Dwight McKissic defended it.

McKissic then called critics divisive to the Kingdom for simply pointing out the problem of Christians having a wicked pro-abortion radical speaking.

McKissic said, “I belong to both conventions. I love both conventions. But, if we go to hurling insults & playing the shame game, it really won’t look good for the sbc. I adjure you to not dishonor the Kingdom of God by sowing discord between the two conventions.

McKissic said, “Tom Buck When you pick unnecessary fights as you’ve chosen to do with VP Kamala Harris’s speech today, you invite comments like this. As I told you earlier, it’s not going to go well for the sbc, or quite frankly you either, if you continue to bark down that trail. Please stop.”

And McKissic also attacked other pastors who expressed issues with Kamala Harris speaking at the event.

McKissic said, “The NBC would be saddened with your support & 80% of the SBC’s support for Trump, who admitted to assaulting women, promoted police brutality in a speech, mocked a physical disabled man…pleeease, You & Buck need to stop this, for the sake of the Kingdom.”

Remember, McKissic admitted to voting for Hillary Clinton. So, he’s got serious moral and theological issues.

As the tipster who sent video to us of the Vice President speaking at the NBC said, it is inappropriate for any politician to address churches “especially ones with evil beliefs.”

The reaction of McKissic shows that the attacks on Trump are partisan. McKissic is really a Democrat who is a sellout to racial identity politics. Dwight McKissic is the SBC’s Al Sharpton.

UPDATE: I hit post before including two tweets from McKissic attacking Mike Pence’s speech at the 2018 Southern Baptist Convention. Talk about a hypocrite!