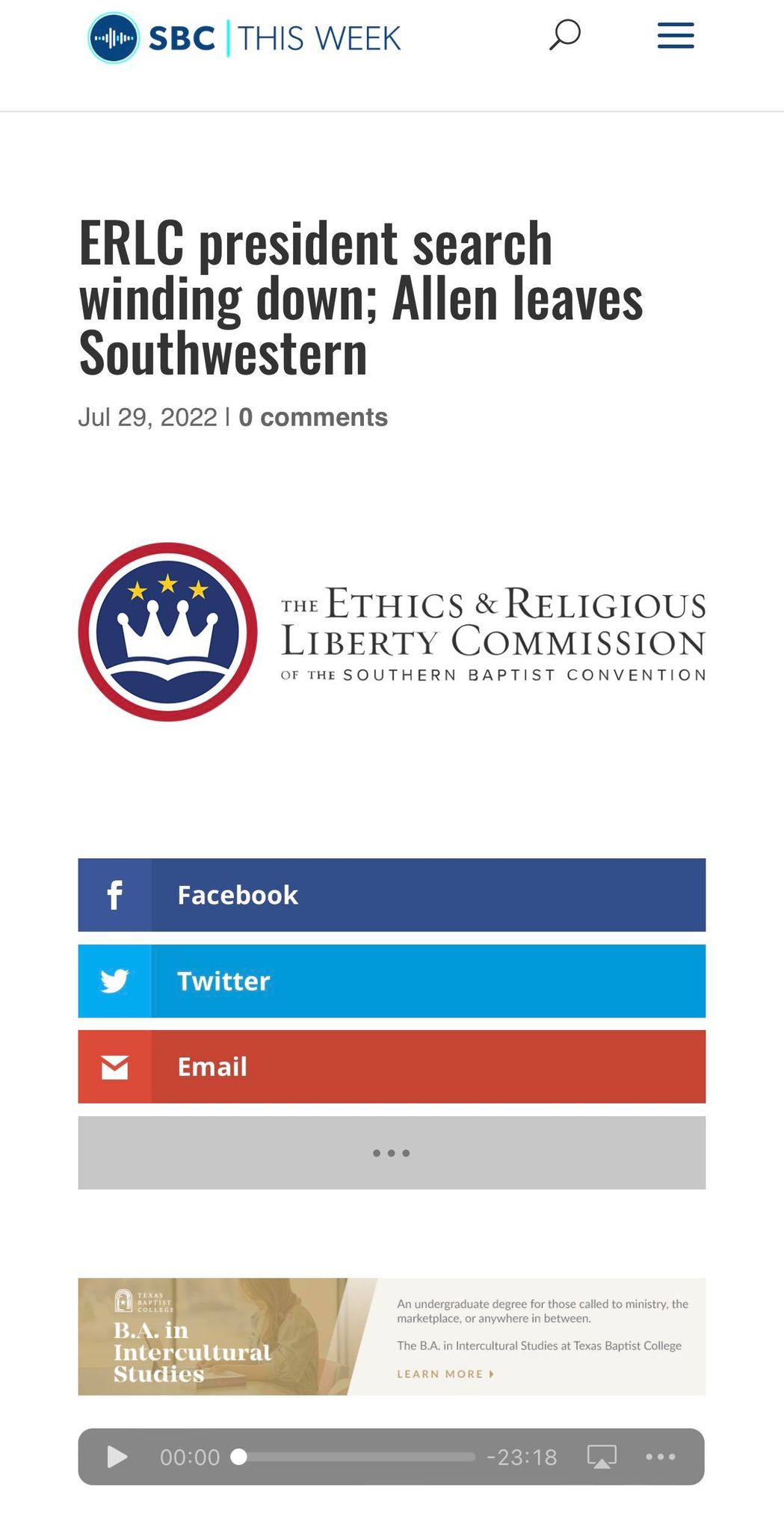 Baptist Press and its leadership are not reporting the truth about how SWBTS fired Dr. David Allen.

Now, SBC This Week, the podcast featuring the SBC’s VP for Communications Jonathan Howe read ad copy about SWBTS on the latest podcast—the very podcast where it “reported” the news that Dr. Allen was leaving SWBTS. Not only did Howe read an ad for SWBTS but there are ads on the SBC This Week site for SWBTS.

This poses all sorts of ethical questions.

Who owns SBC This Week?

Why are SWBTS ads on the site?

Did SWBTS pay for them?

If so, who did SWBTS pay?

Also, how many students will SWBTS have to start the Fall term? Former faculty members and former students say the numbers are shrinking at what was once the world’s largest seminary.

You’ll note that Baptist Press and SBC This Week both cited the SWBTS statement but neither told Dr. David Allen’s side of the story.

This highlights the need for independent news sources to hold SBC Elites accountable.

Here is how SBC This Week covered the situation with Dr. Allen. It is hardly fair and balanced.

“Dr. Allen has resigned,” declared Amy Whitfield. “He is not at Southwestern anymore. He has been there for a very long time and really been in theological education for about 40 years.”

Here is the audio snippet so you can judge for yourself how SBC This Week handled the story. Of course, is anyone shocked that Jonathan Howe would mishandle this story? Howe interviewed Ed Litton last year during Sermongate in what can only be considered a softball interview that attempted to help Litton but only served to show both Litton and Howe as totally incompetent.

Howe is also the notorious leader of the Baptist Press lie that the Soros organization had nothing to do with the creation of the Evangelical Immigration Table. Howe is such an incompetent buffoon he quoted as his primary source in the piece a man who wrote blog posts for Soros’s organization about how they were influencing evangelicals with the newly created Evangelical Immigration Table.

This is not the first time the Greenway Administration lied—you might remember SWBTS lied about Dr. Bobby Lopez. SWBTS claimed it fired Lopez because of student complaints. Of course, Dr. Lopez was smart enough to record his conversation with SWBTS leaders and he recording showed that Lopez was fired because the ERLC complained about him. Then Lopez humiliated the SWBTS liars with an appearance on the Eric Metaxas Show.

What other shoe will drop about the paranoid leadership of Adam Greenway?

And are their tapes?