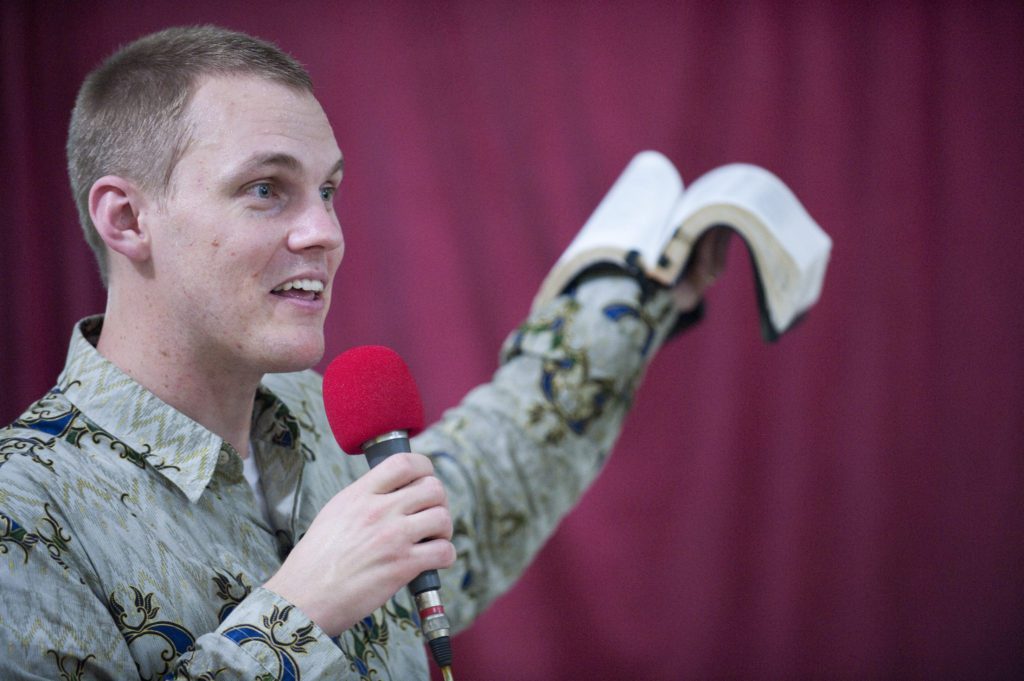 During one of his sermons David Platt “confessed” that “as a white pastor, I am part of the problem.” He then spoke of his need to listen to people, meaning nonwhite people, who know more about race problems than he does. For those of you unfamiliar with Critical Race Theory (CRT), proponents require that white people repent/apologize for being white. They also believe that white people need to sit down and shut up. They don’t have the experience to understand racism or racialization. While I certainly do not agree with CRT, I would agree that David does need to sit down and listen.

I find it ironic that David Platt would say he needs to listen more from the pulpit at McLean Bible Church (MBC). Yet he does the exact opposite with the members of MBC who actually could teach him quite a bit about creating ethnic diversity in a church. I loved the title of the one article posted last week at https://capstonereport.com – “McLean Bible Church was Diverse before David Platt Knew it Existed.” When Lon Solomon was lead pastor, the church had numerous countries and ethnicities represented not just in the pews, but in its many ministries as well. A former staff member (and current member) that had some knowledge on the numbers recently shared that data with me:

A church survey done in the early 2010’s showed that on any given Sunday we had 130 countries represented at MBC. We have had African American, Korean American, Pilipino American and maybe other ethnicities as pastors and on the staff since the 90’s. We sponsored missionaries not just from the US but also from the Philippines, Venezuela, Jordan, Syria, Madagascar, etc.

This former staff member who has been at MBC for many years also noted that the church has become less ethnically diverse. Why? His answer is telling.

Well one reason is because people come here from other countries to better their lives. They believe in the hope of the USA. They came to MBC where they knew all people could come and hear God’s word taught and be loved and accepted and included.

We never talked about race while we became diverse. Why would we want to separate people? Now many people from around the world feel ignored at MBC. It would seem that there are only two races and one is bad.

“They come to MBC to hear God’s word taught and be loved and accepted and included.” Now these people from all over “feel ignored at MBC.” That is so sad to see particularly in a church that has such a wonderful history of ethnic diversity.

I’m glad that the article pointed out that Lon Solomon is Jewish, an ethnic group that has been oppressed since before Moses was born. Hate to mention his ethnicity but I felt that I have to since Platt seems to imply McLean Bible Church has been basically white and privileged. Nothing could be further from the truth. Perhaps he just couldn’t see the ethnic diversity from being way up there on the stage behind the podium.

When Platt first came to McLean, I listened to a couple of Platt’s messages in which he spoke of the need for racial diversity at McLean. Knowing Mclean, I wondered who exactly he was talking to. The congregation was so diverse at that time. I’m thinking “what do you mean we?”  Know your audience is one of the first lessons in writing or speaking classes. David as an author and speaker should know that. That may speak to the limitations of just being a teaching pastor.

Beth Moore tweeted a statement in coming to Platt’s defense against McLean members. Referring to systemic injustice in America, Beth Moore said “You have to have a blindfold on not to see it.”  After reading Beth Moore’s article, blasting the members opposing David Platt’s ideology, a few things occurred to me that David (and Beth for that matter) need to hear.

News Flash! We know that there is injustice not just in America but throughout the entire world, especially those of us who are Christians! Duh? We live in a sinful world. Injustice has existed at least since Cain killed Abel. Now how this is such a revelation to Moore and Platt at their age astounds me. I guess that they have lived a sheltered life. I’m not resentful of that. I’m actually happy for them. Most people, however, have experienced some injustice and/or oppression in their lives, in their jobs, communities and sadly churches. Yes, injustice exists throughout the world but here is the second news flash.

We know that any form of Marxism is not the solution or ideology. It has never worked at any time in human history!  In fact, any ideology based on anything other than the gospel will not bring justice, especially one that tries to judge people based on their ethnicity. We know that to affect true change in our society, the hearts of men must change. Only true biblical salvation can change the hearts of men. It is only through Jesus that there can be true justice! Corollary news flash! We will not see it, nor can we human beings expect to bring perfect justice to this world, meaning social justice people can’t do it. That will only happen when Jesus returns.

One other news flash. Christians and non-Christians alike have exposed the links to Marxism that underpin social justice, critical race theory and theories like Platt’s The Gospel, the Church, Justice and Racism (GCJR) curriculum. They also have pointed out the fallacies of Marxism as a solution to solving any type of injustice or helping the oppressed. By way, it doesn’t matter what a curriculum, or theory, is called. It matters what it is based on. Both CRT and GCJR are based on Marxism. David Platt likes to claim he doesn’t follow those theories. But dig deeper and he teaches principles from them, often bringing syncretism with the scripture.

Yes, David needs to sit down and listen.

He needs to listen to the “lived” experience of people who came from Marxist regimes.” I mention “lived experience,” because CRT proponents, and from what David seemed to imply from the pulpit, believe that trumps “objective” knowledge. (I’m still working on what they mean by objective truth. I suspect that any truth that conflicts with their worldview does not qualify as objective.)  David should listen to the survivors of these regimes. They absolutely understand how Marxist regimes play word games. For example, they would tell David that Marxist regimes actually used the term “woke” in the schools during the Chinese Cultural Revolution. People from China, North Korea, Cuba, Venezuela, etc., have literally risked their lives to flee those countries. They have been pointing out that words are being changed over here in the U.S. to fool people, but the underlying ideology is still Marxist. The people who fled Marxist countries are not hard to find. I imagine MBC has a few, or at least they had a few.

Yes, David needs to sit down and listen. He needs to listen to people who know why Marxist-like curriculums, or theories, are not compatible with the Bible. They would tell him that Karl Marx is an atheist. They then perhaps would remind that God admonishes us “not to walk in the counsel of the ungodly, nor stand in the path of sinners nor sit in the seat of the scornful.” Scornful that describes Marxists quite well. People embracing some form of Marxism typically have an angry scowl on their face, shouting in anger. What are they so angry about all the time?  “Make no friends with an angry man, lest you learn his ways.”

These people would further point out that Marxism instructs followers to judge people based on appearances, making assumptions about people’s motives based on what they look like – the color of their skin. They would remind David that God tells us not to judge according to appearances. “Man looks on the outward appearance but God looks on the heart.” If a race relations course makes Christians judge people by their appearance, it is not of God and has no place in our churches. They would further say that teaching people to apologize or blame them for the color of their skin, is unscriptural. We are fearfully and wonderfully made. We are just the clay. God is the potter.

Yes, David does indeed need to sit down and listen. If he hasn’t done so already, he should sit down with Lon Solomon, and find out how he created such an ethnically diverse church family. Then he should sit down and listen to the members. They would tell David that he doesn’t need to devise some “new” curriculum on race relations, which is actually just Marxism reinvented, if he wants diversity. MBC achieved diversity by embracing the vision to reach secular Washington for Jesus and working together to carry out that vision. In doing so, they succeeded in creating an incredibly ethnically diverse church family. The former staff member that I mentioned earlier stated it very well:

Let’s return to a biblical view of equality and be about our mission of impacting Washington with the message of Jesus Christ.

The key is not Lon’s way, or David’s way, but God’s way which is working together to spread the message of Jesus Christ – the Gospel – to all.

“Go into all the world and preach the gospel to all creation.”