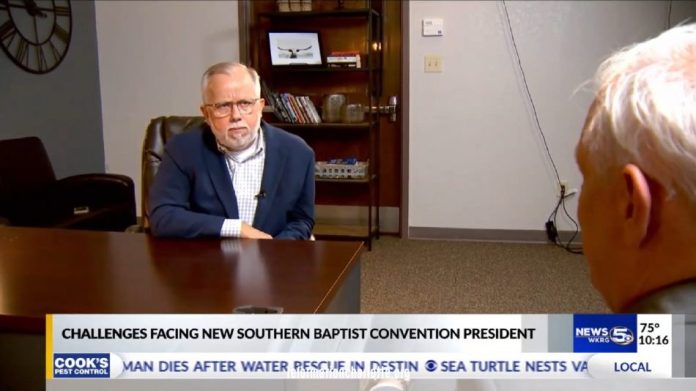 President of the Southern Baptist Convention Ed Litton is an unrepentant liar. The latest lie was told to his local CBS affiliate, and it makes Bill Clinton’s legendary prevarications seem tame in comparison.

Ed Litton said, “They are unnamed. So unnamed sources are presenting these things which should make everybody take a pause.”

This is a total joke. There are hundreds of people—all with names—who have watched the videos, read the sermon text, and made the plagiarism allegations.

For example, Pastor Gabriel Hughes. He posted this to Twitter, “I was one of the first to share a video. Dozens have. He’s lying through his teeth, shifting blame to those who are saying, “The emperor has no clothes!”

And Justin Peters posting on the Reformation Charlotte YouTube page said, “Unnamed sources? My name is Justin Peters. Let’s add to my name the names of Gabriel Hughes, Jeff Maples, Jordan Hall, Tom Buck, Tom Ascol, Josh Buice, Phil Johnson, and literally dozens upon dozens of others who have been talking about this (along with their names) for at least 2 weeks now. There, fixed it.”

What more can you say? This is false and Ed Litton knows it is false.

Ed Litton’s false statements show him to have a serious character flaw.

Ed Litton is a liar.

Ed Litton is an unrepentant liar.

This latest interview shows he is not even contrite.

So, why is he still President of the Southern Baptist Convention?

Why is he still Pastor of Redemption Church?

Why is he even tolerated as a church member at this point?

He should be under church discipline at the very least and likely removed from membership if he persists in these lies. That is the only loving thing the church can do for him at this point.

The longer Ed Litton retains the job of SBC President and Pastor of an SBC church, he smears all Southern Baptists as liars.

Something must be done. And that will be the topic of our next column.