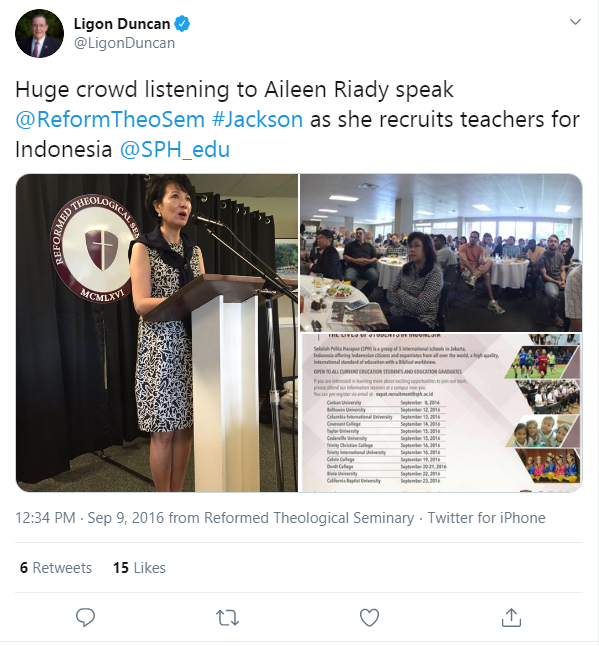 Riady’s gifts to other evangelical organizations include BIOLA and Ouachita Baptist University.

Reformed Theological Seminary (RTS) partnered with convicted Clinton donor James Riady to launch the Center for Reformed Theology in Indonesia. Riady violated campaign finance laws that resulted in the largest fine for campaign finance violations in US history. But that has not stopped Riady’s involvement with and donations to evangelical institutions like BIOLA, RTS and Arkansas Baptist Convention affiliated Ouachita Baptist University.

According to a report from World Reformed Fellowship, “In 2018, after Dr. J. Ligon Duncan, III, and other members of the Board of Trustees, visited Indonesia, they entered into a memorandum of understanding with YPPH, establishing the Center for Reformed Theology (CRT).”

YPPH is the “Pelitan Harapan Educational Foundation (YPPH), a foundation that develops and supports Christian schools, universities, and hospitals throughout Indonesia,” and the partnership between Riady and RTS developed because “Riady wanted to move YPPH’s theology in a Reformed direction,” the report said.

Current RTS president Ligon Duncan, who inked the deal with Riady’s group, is a regular face on the Evangelical conference circuit. He’s a headliner with Southern Baptist Theological Seminary president Albert Mohler—including at T4G. Mohler and Duncan were scheduled to share the stage at this year’s T4G set for April 14-16 in Louisville but canceled due to the pandemic. Mohler and Duncan were regulars at T4G events beginning way back in 2006.

Riady’s generosity to evangelical universities and seminaries is not limited to his work with RTS. According to a 2010 Washington Post article, Ouachita Baptist University in Arkansas and BIOLA in Los Angeles are both recipients of Riady’s largesse.

According to the report, “Ouachita Baptist University, which gave Riady the 2004 honorary degree, won’t say how much he donates to a scholarship fund, or comment on whether he’s provided other money. Biola University, a Christian school in Southern California visited by Riady in October, has also received money but won’t say how much.”

Have donations from well-known Democrats played a role in the spread of Wokeness in evangelical churches and seminaries?

Links to Clintons and Democrats

Riady’s association with the Clintons began in Arkansas. In 1992, James Riady “pledged $1 million in support of Arkansas Governor Bill Clinton’s campaign for the Presidency of the United States,” according to the United States Department of Justice. The led to a scheme where contributions made by John Huang were then reimbursed by LippoBank.

According to the Justice Department, “Between May 1990 and June 1994, Riady and Huang conspired to obstruct the Federal Election Commission by surreptitiously reimbursing political campaign contributions with funds often obtained from foreign individuals and entities which were prohibited sources under the Federal Election Campaign Act (FECA), and in violation of the dollar limitations established by the FECA.”

And all of that was done to gain access to the US government. The Justice Department said, “The purpose of the contributions was to obtain various benefits from various campaign committees and candidates for Lippo Group and LippoBank, including: Access, meetings, and time with politicians, elected officials, and other high-level government officials.”

Republicans alleged the campaign finance violations were an attempt by China’s intelligence service to influence the election. According to a 2010, Washington Post article Riady was involved in “a campaign fundraising scandal that caused a big political ruckus in Washington amid Republican Party allegations, never proved, of meddling by China’s intelligence services in American politics.”

As P&P reported in an expansive 2018 investigation,  “Riady would go on to visit the White House more than 20 times, met privately with Clinton in the Oval Office at least three times, and is on the record urging Clinton to open more trade with China.”

That same report found links between the Riady family and Democrats dating back to the Jimmy Carter administration.

Riady and Lippo Group have connections to the World Economic Forum and the Asia Society.

Riady was already involved with a Reformed Christian church when he violated US election laws. According to a 1997 story on James Riady and evangelical Christianity, Riady’s pastor said the businessman and his father attended a church in Jakarta.

Pastor Tong’s long history with the Riady family is chronicled by a 1997 World article. Tong hosted a Reformed Institute gathering in Washington, DC beginning in 1996—and it featured James Riady’s father, Mochtar Riady.

According to the World, “The first session of the Institute, held in June 1996 and attended by 100 people, featured Mochtar Riady as special lecturer. He spoke at a two-hour evening session on ‘Asian-Pacific Economics and the Future of China.’ No tapes or transcripts of the speech were made, according to Institute director Jahja Ling. Mr. Ling, who is resident conductor of the Cleveland Orchestra and organizes the summer Institute on a voluntary basis, said Mr. Riady spoke at the invitation of Mr. Tong.”

Also, Stephen Tong is featured by Ligonier this month in TableTalk. Tong covers holiness in this video presentation available on the website.

And now the ties between a Democrat mega donor to the Clintons and evangelicals deepened with the start of the Center for Reformed Theology.

What does this mean for evangelicals?