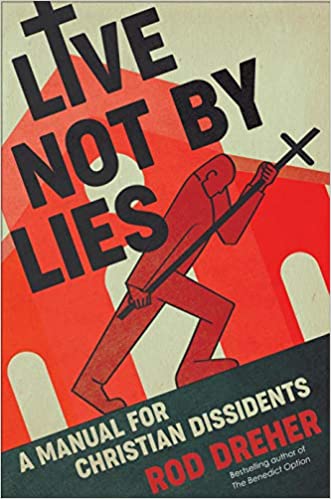 A discussion of Rod Dreher’s Live Not by Lies

“What is happening here? A progressive—and profoundly anti-Christian militancy—is steadily overtaking society; one described by Pope Benedict XVI as a ‘worldwide dictatorship of seemingly humanistic ideologies’ that pushes dissenters to society’s margins. Benedict called this a manifestation of ‘the spiritual power of the Antichrist.’”[1]

Conservative thinker Rod Dreher’s latest book attempts to prepare conservatives for the looming persecution in America. The book seeks to inspire readers to resist the new order by telling the stories of Christians who triumphed over Communist totalitarian regimes. You’ll learn how everything from discipleship programs to a Gary Cooper Western to J.R.R. Tolkien’s Lord of the Rings helped Christian resistance to tyranny.

The stories are inspiring. And Dreher is right that we need this. It is a timely study with America facing mobs in the street demanding the overthrow of the social order to be replaced with a new regime of Social Justice. What makes this particularly dangerous is that the mobs and elites are in total agreement.

This new attack on biblical values will be a soft form of totalitarianism, according to Dreher. American society is ready for it as Dreher skillfully weaves Hannah Arendt into his work to illustrate it.

This is a profitable reminder of Arendt’s timeless study on The Origins of Totalitarianism. Dreher lists out Arendt’s factors from Russian and German societies that aided the rise of brutal regimes. The list is haunting and contemporary American society checks most if not all of the boxes, particularly: loneliness and social atomization, loss of faith in institutions, violent desires, valuing loyalty over expertise and so on.

I would also recommend Arendt’s work On Revolution to get a glimpse of the dangers of Revolutionary movements like Black Lives Matter and Antifa. In that work, Arendt compares the success of the American Revolution to the failures of the French and Russian Revolutions. The parallels to what is happening now in America are frightening.

Dreher does a good job showing how Christian community is an important counterbalance to the social isolation of contemporary Western society. The stories include Baptists in Russia and no doubt this will resonate with many of our Southern Baptist readers familiar with non-conformist persecution.

And the church is a very important part of any resistance to the new tyranny. He writes, “This is the core of what religion brings to anti-totalitarian resistance: a reason to die—which is to say, a reason to live with whatever suffering the regime throws at you, and not only to live, but to thrive.”[2]

Unfortunately, the church is not prepared.

Also, Dreher points out the totalitarian playbook is to co-opt the church.

“For one thing, he (Father Kolaković) correctly foresaw that the communists would try to control the Church by subduing the clergy.”[3]

Isn’t this what is happening in America? The rise of Wokevangelicals are one example of the clergy seduced by the spirit of the age.

However, it does not stop there. One can find the very heart of Critical Theory and Intersectionality promoted by theologians working in the so-called conservative Southern Baptist Convention. The infamous Resolution 9 is but one of many examples.

This is an area that needs extensive analysis. Researchers should focus on who is seeking to corrupt churches. We know the why. And we even know a few of the players like progressive billionaire George Soros who funneled millions of dollars to evangelical pro-immigration groups. Doubt that? Everyone from Eric Metaxas to the Blaze to the Institute on Religion & Democracy reported on this.

Are there other Leftists donors using money to seduce these so-called conservative churches? And what channels are they using to subdue our clergy?

If only this book were written two or three years ago! Its message is so important about the religion of Leftists and the theological battles going on in our churches and seminaries.

Dreher rightly identifies the looming threat: the alliance of the Social Justice mob with the elites of Woke Capitalism. He is a pessimist. He assumes our defeat is already accomplished. He declares without a doubt that we’ve lost the culture war.

Perhaps he is right. And to that end he provides a list of how to build a thoroughly Christian resistance—a way to build disciples as Christians did under Communist totalitarian regimes.

However, does this have to be? He affirms that Bolsheviks were a minority and yet through strong leadership and determined effort conquered Russia. If a dedicated minority can do that in Russia for evil, why can’t it happen in America for good?

Perhaps there is a lesson in Franco’s Spain or Oliver Cromwell’s England? If we are extremely fortunate, William of Orange’s England of the Glorious Revolution might be a model. However, such a peaceful return to liberty and peace depended on the strong leadership of elites.

The elites are on the side of the Woke Mob this time.

Dreher’s pessimism is warranted. With secularists firmly in control of finance, academics and government, perhaps all that is left is a rear guard action.

There is reason for concern. The church in America is drunk on the decadent culture. Our sexual ethics and moral thinking resembles the lost world more than it does the Bible. We’ve done a horrible job making disciples. We fail to answer the tough questions posed by youth and eschew the disciplines required to think deeply about faith. Philosopher and apologist William Lane Craig has said numerous times that often very important questions asked by younger Christians are never answered or dismissed by church leaders. This is a critical failure. We must do better.

This is why several years ago when the fight against Wokeness infiltrating the church began, I recommended those interested in battling it begin with systematic studies of Christian doctrine. Sunday School classes like the Defenders series taught by Dr. William Lane Craig provide the strong foundation of orthodox Christian doctrine combined with the rigorous critical thinking skills necessary to build discernment—which is required to fight the craftiness of the Woke Cult.

Study these sources now while they are available for free before Big Tech censors or restricts access.

“The embrace of aggressive social progressivism by Big Business is one of the most underappreciated stories of the last two decades. Critics call it ‘woke capitalism,’ a snarky theft of the left-wing slang term indicating progressive enlightenment. Woke capitalism is now the most transformative agent within the religion of social justice, because it unites progressive ideology with the most potent force in American life: consumerism and making money.”[5]

Dreher places some blame on the alliance between social conservatives and libertarians in the Republican Party for many problems influencing the church today.

He writes, “Relativism clad in free-market dogma aided the absorption of the therapeutic ethos by the Religious Right. After all, if true freedom is defined as freedom of choice, as opposed to the classical concept of choosing virtue, then the door is wide open to reforming religion along therapeutic lines centered around subjective experience. This is why so many conservative Christians did not see, and still cannot explain, the ongoing victories of transgenderism in the culture war. The transgender phenomenon, which requires affirming psychology over biological reality, is a logical culmination of a process that started centuries earlier.”[6]

Dreher is correct that conservatives must stop viewing big business as virtuous. It is not. It has shown it can be corrupted as easily as government bureaucrats.

And Dreher is right that the new totalitarians would exploit Big Tech and Big Business to marginalize Christians. To hold to orthodox Christian views of sex will have a high cost if things do not change. We will be excluded from the rewards of consumer culture.

Perhaps it will benefit the church. Dreher talks about the benefits of suffering. However, Dreher rightly notes that the Christian is not to seek out such suffering or martyrdom.

This is one area that is annoying about modern evangelicalism. There is a group, I’ve encounter them on Twitter and Facebook, who say the coming persecution is good. They want it. Almost as if they believe they can handle the persecution.

They should read Dreher’s book. It is sobering what Christians suffered under communism.

I do not want my children or friends or anyone to experience persecution for attempting to worship and honor God.

In fact, I want to fight this. Perhaps it is a rear guard action against the forces that won the Culture War. But we must resist.

Why? Because the soft totalitarianism that uses a Social Credit system to control the population would be bad enough. But, what if once that is accomplished then hard totalitarianism follows?

So, read Dreher’s book. Prepare your family, your church and friends for what is coming. And fight. Fight now and get ready to fight more difficult battles in the days to come.

This is a review of Rod Dreher’s Live Not by Lies Kindle Edition published by Penguin Publishing Group.