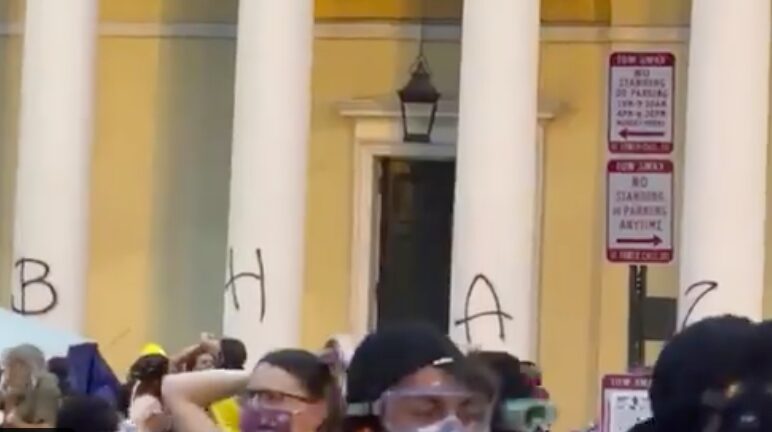 The Church is in danger. It is beset with doctrinal threats from the Social Justice Gospel and now physical threats as rioters desecrate our houses of worship.

Black Lives Matter leader Shaun King tweeted out his fatwa against any Christian art that doesn’t meet with his approval. He said,

“Yes, I think the statues of the white European they claim is Jesus should also come down. They are a form of white supremacy. Always have been. In the Bible, when the family of Jesus wanted to hide, and blend in, guess where they went? EGYPT! Not Denmark. Tear them down…Yes. All murals and stained glass windows of white Jesus, and his European mother, and their white friends should also come down. They are a gross form white supremacy. Created as tools of oppression. Racist propaganda. They should all come down.”

One is tempted to go through a long discourse on the danger of this statement, but why? It is enough for us to all see the threat. If there is some private property these Marxists do not like then they will either take it or destroy it.

As ToddStarnes.com reported, “Historic St. John’s Church has been hit by vandals. They desecrated the church by spray painting the words, BHAZ on the front columns. BHAZ stands for Black House Autonomous Zone.”

And St. John’s is a liberal church.

Don’t think selling out to Black Lives Matter or the Democrat Party will keep you safe. It won’t.

They will do to you and your church what Xi Jinping is doing to churches in China—tearing them down. And they will follow in Xi’s path to rewrite the Bible. (Xi is working to make Jesus and the Bible more acceptable to the socialism practiced by the Chinese Communist Party.)

This is a Revolution. And as Hannah Arendt explained, “In theory as in practice, only a counter-movement, a contrerévolution, could stop a revolutionary process which had become a law unto itself.”

As if praying to the secular zeitgeist will help them.

SBC President Greear said he would “retire the Broadus gavel, a little known artifact except to the few men who use it to bring to order or to end a session of the annual meeting of Southern Baptists,” according to the Louisiana Baptist Message.

Talk about a useless, empty bit of virtue signaling.

While we are at it, Dr. John A. Broadus baptized Lottie Moon. Lottie Moon’s family owned slaves. Should we cancel the Lottie Moon offering too?

Oh wait, that might hit the bottom line. We already all know the answer to that.

We also know how the story ends and the Gates of Hell will not prevail. However, persecution and tribulation are promised to the church. Yet, we still should pray and do our best to seek a peaceful life (I Timothy 2:2). So, recognizing the very plots of antichrist to destroy and overwhelm the church in secular politics and culture is part of our Christian duty.

Why have so many SBC Elites failed in this duty?

Whatever the reasons, they have failed.

Wilson wrote, “So what the evangelical world actually needs is a changing of the guard. We need new leadership. We need to identify those men who have been warning the evangelical world for decades about what is coming down the pike, and who have now been proven right. The old guard has been fooling around with tepid half-measures, and a little respectable growling here and there, but they have not seen and identified the threat for what it was. They have not been willing to see the threat for what it was all along.”

It is time for new leaders. The SBC Elites have failed. Their feckless response to riots was to justify the lawlessness. No thanks.

And we need them before it is too late.

3 thoughts on “ALERT: The Church in Danger”