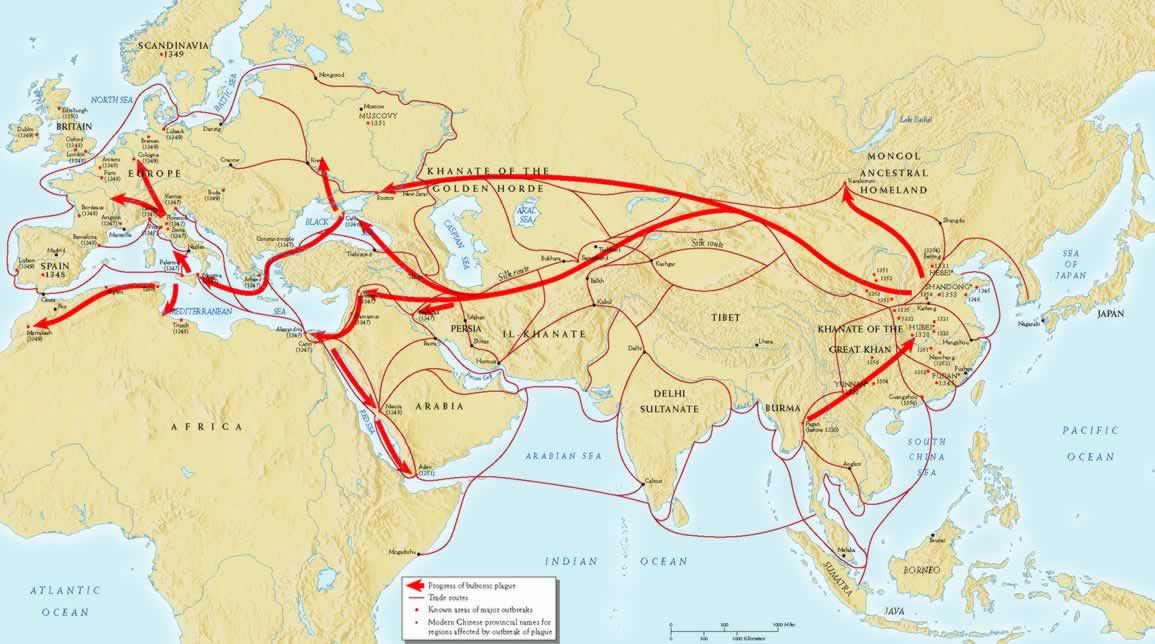 World travel. Immigration. Trade. Those good things often bring with them something bad. In 1347, what started in the Hebei province of China arrived in Genoa—the Black Death. It took a decade, but it hit Europe and killed millions.

Today the COVID-19, a coronavirus pandemic, similarly began in Hubei province of China. Similarly, travel and trade brought the disease around the globe. This time it arrived in days, weeks and months instead of the decades of the fourteenth century.

But this isn’t an isolated case. The movement of people into the US through immigration has reintroduced many deadly diseases.

Back in 2014, PBS reported on the increasing incidence of diseases like measles. What was at fault? Unvaccinated people entering the country after being infected in other countries.

Q by Hari Sreenivasan: How much of this is related to people coming in from other parts of the world and combining with the populations here who are not immunized?

A by Stephen Morse, a professor of epidemiology at the Mailman School of Public Health at Columbia University: In most cases that is what is happening. There are a number of places like the Netherlands for example in the UK and elsewhere with various religious communities that refuse immunization. They just don’t want to be immunized. Occasionally, a case will break out there and someone will come here.”

Sreenivasan then noted in 2014, “Scarlet Fever cases are at a 24-year high in the UK. Obviously, in this global and connected world, people are carrying diseases along with their luggage as they travel to and from.”

But, that’s only part of the story.

Many of these dangerous diseases spiked in tandem with the increased surge of illegal immigrants during the George W. Bush Administration and continuing during the Barack Obama Administration.

Unrestricted immigration came with a significant price—an increased prevalence of these once eradicated diseases.

Despite the complicit mainstream press and deceptive claims of Evangelical Elites—the Coronavirus Pandemic is the China Virus.

Want to know how much of this is China’s fault? You don’t have to look to tinfoil hat wearing conspiracy theorists—just read the Council on Foreign Relations’ Foreign Affairs: “The sheer chutzpah of China’s move is hard to overstate. After all, it was Beijing’s own missteps—especially its efforts at first to cover up the severity and spread of the outbreak—that helped create the very crisis now afflicting much of the world.”

And then the scholar offers the entire indictment against Chinese totalitarian leadership:

“In the immediate aftermath of the outbreak of the novel coronavirus, which causes the disease now referred to as COVID-19, the missteps of Chinese leaders cast a pall on their country’s global standing. The virus was first detected in November 2019 in the city of Wuhan, but officials didn’t disclose it for months and even punished the doctors who first reported it, squandering precious time and delaying by at least five weeks measures that would educate the public, halt travel, and enable widespread testing. Even as the full scale of the crisis emerged, Beijing tightly controlled information, shunned assistance from the CDC, limited World Health Organization travel to Wuhan, likely undercounted infections and deaths, and repeatedly altered the criteria for registering new COVID-19 cases—perhaps in a deliberate effort to manipulate the official number of cases.”

So, this is the China Virus.

Of course, the Foreign Affairs article encourages us not to get into a battle of narratives, but focus on fighting the virus.

That’s all well and good, but part of fighting the virus is holding China responsible for its role in this fiasco.

And realizing that borders should mean something again.

The lockdowns that appear to be working in China provide a lesson—travel restrictions work at slowing or halting the spread of disease.

So, restrict travel and trade with irresponsible states.

Such a move would encourage US companies to once again locate in non-totalitarian states at the very least. Or, perhaps relocate jobs to America.

This is a national security issue.

And this is a major political issue.

The future of the US is at stake. Do we want more disease? Do we want to encourage China’s reckless pandemic creating behavior?

Or, do we want a change?

Recommitting ourselves to national sovereignty with real borders might be the best place to start.

2 thoughts on “Travel, Immigration bring disease into US”